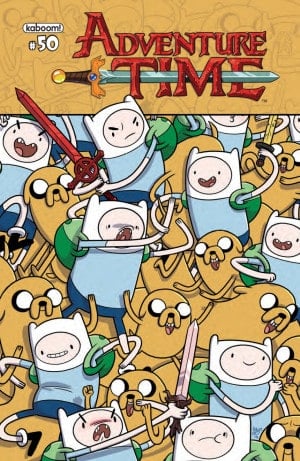 In Adventure Time #50, Bravest Warriors and Welcome to Showside artist Ian McGinty takes over on interiors, but unfortunately his fun, animation-influenced style is bogged down by a whole load of Adventure Time mythology and continuity in writer Christopher Hastings’ continuity. Fans who have seen the 200+ episodes of the TV show, or ready the other 49 issues of the comics may get more enjoyment and insight out of seeing Finn’s past and future selves, but for a more casual fan, like me, who has seen only the first few seasons, read some of the graphic novels, and the Marceline and Fionna and Cake miniseries, it is not as entertaining. The premise of the issue is that Finn and Jake investigate a creepy tree with skulls on it that is actually the corpse of the Lich (The Big Bad of Adventure Time) when he was defeated by Billy, a legendary hero, who Finn and Jake are big fans of. This tree ends up having a scrapbook (haunted by the Lich) of Finn’s adventures and baby pictures, and he ends up getting sucked into it and turning into his various reincarnations, like the school girl Shoko, beleaguered employee Davey, a butterfly, and a comet. It is similar to the Buffy the Vampire Season Four finale “Restless” set entirely inside Buffy’s dreams with elements both humorous (The Cheese guy.) and foreboding (The First Slayer, the fact that she has a sister.)

See also  The 2014 Montreal comic-con a success despite disappointments

Each reincarnation gets bits and pieces of a story, but they don’t really mesh except at the end when Hastings gets deep with a side of wacky humor as Comet Finn ponders free will and choice while battling the Lich. McGinty plays around with the simple, yet brilliant design for Finn, especially as he morphs into wilder and crazier forms, like the butterfly and comet. The faceless blue and white butterfly juxtaposed against the overwhelming darkness of the Lich’s clouds in a double page spread from McGinty and colorist Maarta Laiho is a fitting image to show how Finn just wants to go on adventures and have a good time while the Lich is obsessed with things, like the end of the world and epic battles between good and evil. However, the Shoko and Davey storylines don’t really gel and has a real non sequitur as they go from a school to office story with the Ice King and space travel mixed in between. These are great ingredients, and McGinty nails Ice King’s impotent rage, but the final product is lacking.

With a plot steeped deep in Adventure Time lore, Adventure Time #50 wasn’t for me, but more knowledgeable fans may get a kick out of it. The comic is technically sound though with creative lettering from Steve Wands to show how overblown and melodramatic the Lich is, bright and spooky colors from Maarta Laiho, and fun, expressive art from Ian McGinty. If you like a certain type of pet or hero cycles, the last few pages will be a treat.