Home
Entertainment
All Hail The King
Prev Article Next Article 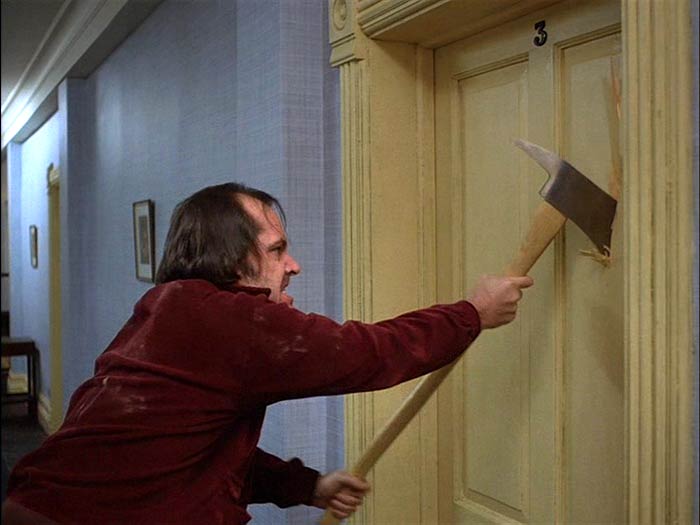 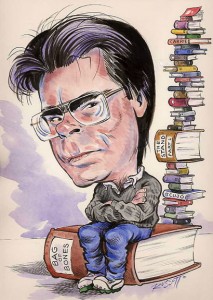 Though primarily a literary figure, Stephen King has enjoyed one of the most successful symbioses between publishing and Hollywood of any popular author, if not in box office and critical respect (those trophies would most likely have to go to Harry Potter creator J. K. Rowling) certainly in terms of sheer quantity.

King’s first novel, Carrie, was published in 1974, and the breakout success of Salem’s Lot, published two years later – the same year the movie version of Carrie was released – elevated him into the major commercial publishing ranks and ignited a revived interest in literary horror fiction as a whole.  King’s ascension to bestseller status roughly coincided with a surge in Hollywood horror fare (this was, after all, the era of The Texas Chain Saw Massacre [1974], Halloween [1978], The Exorcist [1973], The Omen [1976], just to name a very few), and his early-won, long-held prominence in both print and film – with each venue reinforcing King’s status in the other – quickly combined to cement his reputation as one of modern horror’s leading lights.

Since the screen adaptation of Carrie, King-based horror movies have been so much a regular feature of studio slates it wouldn’t be unfair to consider the 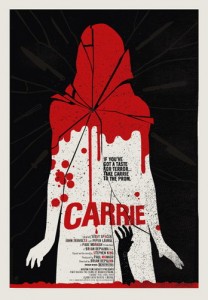 King-inspired creep fest as a genre unto itself.  Since 1980, hardly a year has gone by without a theatrical release or TV project connected to the author.  According to the Internet Movie Data Base, as of this writing there have been some 120 theatrical releases, shorts, TV movies, series and mini-series – including sequels and remakes – built around King’s novels, novellas, short works, and original screenplays, beginning with Carrie and up to and including over a half-dozen projects currently in various stages of development or production including adaptations of his most recent novels, Cell and Under the Dome, both tentatively scheduled for a 2011 release.  “Stephen King” is considered such a branded commodity among the major studios that the novelist’s name is not infrequently incorporated into the titles of screen adaptations and originals as a marquee draw i.e. Stephen King’s Graveyard Shift (1990), Stephen King’s Silver Bullet (1985), Stephen King’s The Green Mile (1999), etc. 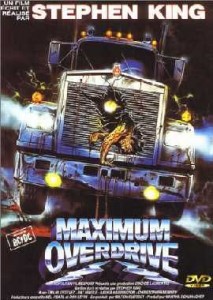 What makes King so representative of movie horror over the last 35 years is that the extensive canon of King screen adaptations and originals encompasses nearly every approach, trend, and permutation of horror cinema the studios have explored over that period, from the industry’s 1960s/1970s surge in elegant, adult-oriented horror (The Shining, 1980) to the 1980s tidal wave of more modestly-produced shockers (Pet Sematary, 1989), and so on.  Stephen King thriller movies range from the insipid (Graveyard Shift [1990] – giant rat preys on mill workers; Maximum Overdrive [1986] – alien force takes over the world’s trucks) to the intentionally kitschy (Creepshow [1982] – anthology salute to the horror comics of the 1950s and 1960s) to the intellectually intriguing (Apt Pupil [1998] – disaffected teen becomes interested in elderly neighborhood man who might be a Nazi war criminal).  There have been King thrillers which were exhausted rehashes of the familiar (werewolf tale Silver Bullet, 1985), while others were refreshingly novel (Carrie and its portrait of adolescent frustration manifesting as telekinetic catharsis).  Some stories have been all “hook,” hung on a promotable premise but little else (Thinner [1996] — nasty lawyer is cursed by a gypsy to become thinner and thinner) while others have been so effectively drama-driven one is loathe to even consider them thrillers (Dolores Claiborne [1995] and its front story of a fractured mother/daughter relationship).

Productions have been similarly variegated.  Some King features have been prestige productions helmed by the strongest directors in the horror genre (Creepshow’s George Romero; Christine’s [1983] John Carpenter; The Dead Zone’s [1983] David Cronenberg), as well as some of the most notable directors in the commercial mainstream (Carrie’s Brian DePalma; The Shining’s Stanley Kubrick; Misery’s [1990] Rob Reiner).

Hollywood’s consistent interest in the “Stephen King” genre is understandable beyond the obvious hope the brand will bring a built-in fan base to movie houses.  King’s stories are mainstream-friendly as they are often clearly-defined morality tales with boldfaced villains and Everyman heroes who find some deep, inner, uplifting resource to take them to an ultimate triumph.  As well, by King’s own admission, many of his horror stories provide just the kind of grotesqueries – “…the gross-out” — which appeals to the horror genre’s youthful fan base and its appetite for visual shocks. 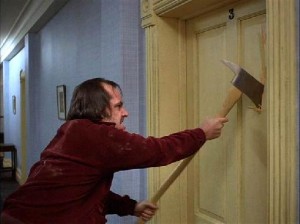 King has a penchant for returning to certain story ideas and elements and reworking them into new but familiar shapes.  Thus, the homicidal blocked aspiring writer of The Shining becomes the homicidal blocked established writer of Secret Window (2004); the haunted hotel corrupting its caretaker in The Shining becomes the haunted vintage sedan corrupting its owner in Christine; The Faustian Needful Things (1993) becomes the Faustian Storm of the Century (1999); the relationship between a young boy and old hotel cook with whom he shares a special psychic connection in The Shining becomes the relationship between a young boy and middle-aged boarder with whom he shares a special psychic connection in Hearts in Atlantis (2001); childhood bullies are faced down tragically in Carrie and Christine, more triumphantly in Sometimes They Come Back (1991) and Hearts in Atlantis; in Salem’s Lot, a fatigued novelist returns to his sleepy town to find it plagued by vampirism, while in The Tommyknockers (1993), an alcoholic poet discovers his sleepy town is plagued by an alien force.  Such recyclings have only attracted a Hollywood enamored of  sequels, remakes and knockoffs, and which often seems less interested in forging iconoclastic successes than in cloning past ones.

Hollywood execs have no doubt also been attracted to the fact that most King theatricals have been produced for moderate budgets.  Up until The Green Mile ($60 million budget), the average budget 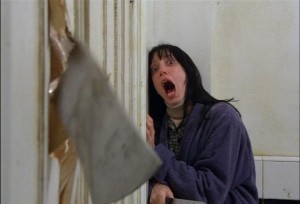 for a King theatrical over a 20-year period stood at a little over $11 million.  Subtract the few top-of-the-line King adaptations from the roster – The Shining, The Running Man (1987), Misery (1990), The Shawshank Redemption (1994) – and the average budget over the same period drops to a lean $8.7 million.

While these elements go a long way toward explaining Hollywood’s ceaseless mining of King’s material, there remains something paradoxical about the major studios’ fealty to the brand; a fact which, in itself, reveals something indicative about today’s Hollywood mindset.

King’s literary success has never found parity on the big screen.  While, as an author, he has been a consistent bestseller for decades, the canon of King screen works can boast only very few major box offices success.  Of 41 Stephen King theatrical movies released between 1976-2007 (including non-thrillers like the elegiac boyhood tale Stand By Me [1986], and prison drama The Shawshank Redemption), 19 either fell short of breakeven on their domestic release or were outright flops.  Most of the remainder were modest or mid-range performers with the average box office for those same 41 releases standing at a little over $30 million domestic gross per.  Only four Stephen King adaptations over that same period grossed more than $60 million:  The Shining ($65 million), Misery ($61.3 million), The Green Mile ($136 million – best performance of a Stephen King movie to date), and 1408 ($72 million).  The record becomes even more uninspiring the more parsed it gets:  only seven of these 41 features have grossed more than $40 million domestic; 18 grossed less than $20 million; seven earned less than $10 million.  The most recent big screen King feature:  2007’s The Mist, adapted and helmed by Frank Darabont (who had previously adapted/directed Shawshank and Green Mile), turning in a disappointing $25.6 million box office on a budget of $18 million (Hollywood rule of thumb:  a movie typically has to gross at least twice its budget to achieve breakeven). 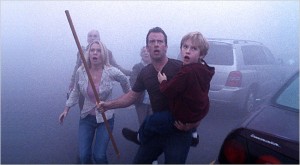 To be fair, this performance rate may say more about Hollywood thriller-making than King’s material.  Many King adaptations pare down the pop culture texture and character drama which have helped the author connect so widely with readers, and, instead, emphasize the horror and gross-out aspects of his work.  Going one step further, some projects seemed to have been picked primarily for their quotient of bizarreness and the grotesque (Silver Bullet, Graveyard Shift, and Thinner offering prime examples), rather than their ability to sustain a movie feature.

Still, despite a box office record which could only be described as erratic, Hollywood’s devotion to Stephen King as a brand name franchise has been unflagging and surprisingly consistent over the last thirty-odd years, regardless of whether the industry has just experienced a King triumph or a string of King disappointments.  In this, Stephen King movies are a testament to an industry dedication to the concept of the brand name franchise bordering on religious fanaticism.  Particularly as time has gone by, the major studios have seemed less concerned about selecting just the right Stephen King property and matching it with just the right cast and director, then they have been in getting anything on a cinema marquee which begins with the descriptive, Stephen King’s….