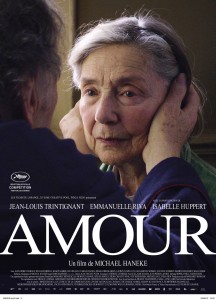 There was a time not so long ago when word surfaced that Michael Haneke’s newest film would be titled ‘Love.’ To say that this news was a shocker would be to exaggerate, but it somehow left the sensation that something had not quite gone down, like eating an overly dry egg sandwich. Either something wasn’t quite as it seemed, or it was exactly as it seemed. So, had the austere master’s view of humanity finally mellowed? Were we to surmise that Mr Severe had grown at the turn of the decade suddenly sentimental, or was the title an ironic counterpoint to a probing exploration of something that was anything but the title, à la Funny Games? On learning that this project would tackle – of all things – ageing, the intrigue only grew, if only for the fact that people could hardly imagine a company of octogenarians anywhere who would submit to the demands of this brutally honest filmmaker. Having postponed the project years prior because of Sarah Polley’s very fine but quite dissimilar Away From Her, Haneke, on the back of a Palme d’Or win, thankfully revived his tale of a refined old couple and their daughter who must contend with that timeworn nemesis called stroke.

So much for unwilling octogenarians, Haneke called upon two icons of European cinema to play the central couple, and boy do they bring it or do they. The narrative takes place almost entirely within the confines of an apartment, and so the performances are key. In Amour, they are virtually faultless. Emmanuelle Riva, a gorgeously poised woman in the autumn of her years who made a strong impression on a young Haneke in Hiroshima Mon Amour, puts her body and her image on the line in order to play Anne, the stroke victim. Last year, Michael Fassbender was rightfully praised for his actorly commitment as he fearlessly put vanity and modesty aside in order to play Brandon in Shame. Riva deserves equal if not greater acclaim for allowing herself to not only strip nude on a toilet seat, dribble spit and water down her front and mumble “hurts…hurts…” inanely, but for portraying something that a person of her age might find a little too close for comfort. There is a certain ferocity to her performance and a slightly bitter stoicism in her interactions with Georges and the visitors they receive in their home, particularly in the early half of the film as she comes to terms with her crippled arm and her wheelchair and the idea that she is now an object of pity. As for the role of her husband and carer Georges, Haneke has made no secret of the fact that Jean-Louis Trintignant (My Night at Maud’s, Z, The Conformist) was the limiting factor in Amour’s ultimate existence as a film seeing as the part was written for him and for him alone. In many ways the film lives or dies on his performance because as Anne’s mind and body crumbles Georges is increasingly alone and we the audience left alone with him as he reflects on his loss and reminisces about the things he has lost, like the pleasure of watching Anne playing Beethoven on their grand piano. Maybe more than Riva, his is a deeply internalised performance. Weary-faced and with a slightly wobbly walk, Georges diligently cares for Anne, doing all he can to ensure that she remains at home rather than trailing lines and tubes at a hospital which she explicitly objects to. As Anne becomes increasingly difficult to manage – refusing to eat or drink – no one can be blamed for at times questioning the strength of his patience, and it certainly fails on occasion, to shocking effect. But as a couple the two actors transcend chemistry, and there is never any doubt that the amour of the film’s title still simmers beneath their interaction even if it has been compromised by circumstance. Every married couple in every Haneke film goes by the same pair of names: Georges and Anne, Georges and Anne, Georges and Anne. In this film things are no different, only here Georges and Anne are two retired music teachers (it seems ex-piano-teachers) living in a spacious Paris apartment, both quite advanced in age and very much suited to each other. Like many couples whose marriages have endured for decades on end, they seem to regard each other with the same tender nonchalance any able-bodied right-handed individual would their right arm: as a priceless presence whose permanence has been so established that its loss is barely a consideration. So, when early in the film they attend an ex student’s piano recital, how are they to know that Anne will shortly be inflicted with a series of strokes that will reduce her to an incontinent, babbling mess with enough insight to realise how much of an incontinent, babbling mess she has been reduced to; that one person will lose themselves while the other slowly loses the person they once knew. This is the central tragedy of the film Haneke has crafted, one hinged on the dilemma of individual dignity versus sanctity of life versus the unwillingness to let go. But if this was the film’s primary entry point, Amour might have struggled to escape the confines of didactic moralising or confounded hand-wringing. The writer-director made a smart move by finding an even more enduring theme that would transcend end-of-life legalities and practicalities. He chose something that would be a stick in the mud of any pragmatic argument. He chose good old irrational love. Amour.

But why love? So: a sudden and forceful prologue opens Amour, effectively bookmarking the film on both ends and eliminating any plot suspense that might distract from the images and ideas that will be presented. We see this prologue, then we see the title. The very force of this opening and the starkness of the vision we are treated to immediately suggest that this film’s vision of love is a lot more complicated, daresay perverse (in the best sense), than the usual silver screen portrayals. Unlike the commonplace view of love as being ever benevolent, Haneke seems to be exploring the sometimes oppressive nature of love; how both Georges’ and Anne’s love for each other, their duty to one another, are often in conflict. Anne loves Georges, so much so that she begins to consider herself a burden on him. Yet George’s love for Anne will not allow him to even consider her as such however much of a physical burden she might actually be to an old, rickety man like himself. His love for her makes him averse to send her packing to a hospital or a home, but he is also painfully aware of the fact that living is becoming – for her – an unbearable burden and an existential ache which he can do little to alleviate. He feels utterly helpless and impotent, so he decides to be the enforcer of her will. And then you have the couple’s only child whose prickliness does not obscure the fact that she is a concerned and devoted daughter genuinely horrified by the sight of her once distinguished mother stripped of all dignity. Isabelle Huppert as Georges and Anne’s daughter is a picture of hopeless distress. She tearfully implores her father to transfer Anne to a better-equipped place, but Georges remains steadfast to his wife’s wishes. In the final half-hour, the film really wonders about the nature of love and the ways that love can be expressed. To say too much more would be to spoil, but by this point Amour really wrestles with the concept of love by forcing us to question whether a failure of love has occurred or whether love has truly been exemplified. The audience this writer was with sat quietly, stunned, unsure, moved and perplexed. It would be no surprise at all that this response still remains in most of us. It would be no surprise that we are now even less sure how to respond than we were a week ago in that darkened theatre. So the word currently on the street is that Amour is Michael Haneke’s most humane film to date. Well maybe not ‘the word’ per se, but the general impression that wafted its way out of Cannes and onto the worldwide filmic web was that the Austrian maestro had rarely (read: never) made a film which seemed to feel for its characters with the simplicity that this one does; that his films – masterful as they often are – rarely grant “the viewer” ample breathing room to truly sympathise with those who suffer on screen for our viewing — pleasure. It’s funny that his very formalist visual style, which can feel in one context clinically detached and rigorous, can be in another context gentle and observational. The director’s apparent attraction to muted colours, bookshelves and pianos, classical music and a strong sense of space all lend a wintry feel to the film, wintry but not cold. You can feel the weight of experience, but you can also feel the humility that can come with age. But what makes Amour so interesting is that, as much as it is the work of an older, more inwardly reflective and perhaps gentler man, it is still very much in keeping with the Haneke of lore: the so called provocateur with an eye for violence and a taste for human imperfection. Well, here disease is violence and loss is violent. Love can be violent as much as it is beautiful. His compassion as an artist, always present but often implicit, is pervasive throughout this film, but this does not mean that he is any less willing to cast his classically composed gaze upon the horrors of existence; the indignity of life and the indignity of losing it. In fact, had Haneke opted for another one-word title for this film it may very well have been ‘dignity.’ But he chose ‘love’. And he chose well, with respect to pretty much everything.