Let’s start with the bad. Carey Mulligan’s Jenny is just slightly too self-assured and forthright for a sixteen year old. The lurch from light-hearted to a darker tone midway through the film is marginally clumsy. And the running time is about 5 minutes too long: the ending grates somewhat and fractionally undermines that which has gone before it. And…that’s about it. An Education is a film in which so much is of the highest order, from the acting to the screenplay to the direction, that these really are its only flaws. 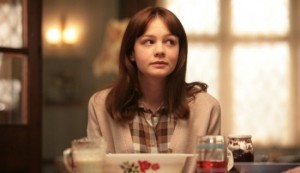 The screenplay itself comes from the pen of Nick Hornby, adapting an autobiographical essay by journalist Lynn Barber (the full memoir, of the same name, was not published until June of this year). He does a wonderful job of crafting rounded, likeable characters who are all true to life yet eminently watchable – something of a fine balancing act when ‘unspectacular’ true stories such as this are transposed onto the big screen. The dialogue is punchy and potent without being overly contrived, and audience investment is drawn subtly and steadily yet without manifest manipulation. One is invited to care, to go along for the ride, but not coerced – although the abundant quality on display pleasingly makes the choice redundant.

The ride on which we are taken is far from a thrills-and-spills roller-coaster and more a Sunday drive down country lanes. The setting is Twickenham, 1961, and we are immediately introduced to16 year old Jenny (Mulligan) and her parents, sat around the dining room table in their modest, suburban, family home. Jenny, aspiring Oxford applicant, reluctant cellist, and wannabe Parisian longs to be a world away from the stifling repression that she believes has overrun those around her: family, friends, teachers, and which threatens to do likewise to her. Academic prowess is her escape route, and once amongst the Dreaming Spires she intends to do nothing but read Camus, smoke Gauloises and listen to Juliette Greco. Or activities to that effect.

Yet an early, and easier, route to this cultured lifestyle opens up in the form of the dapper David (Peter Sarsgaard). With his maroon Bristol, sharp suits and well-connected friends he whisks Jenny away for a whirlwind taster of that which she so desires. Ravel concerts, auction houses, trendy cafés – even a trip to the city of her dreams – it all comes thick and fast, and opens our young girl’s eyes. David’s interest in Jenny is never covert nor seedy, nor without reciprocation, and the relationship that blossoms between the two plays out tenderly, believably, and at a good pace. The narrative hook, as one might suspect, is that David – in more ways than one – is not exactly the man he presents himself to be. Jenny finds herself at a crossroads (although it’s more like a T-junction really…), and the usually forthright and cocksure teen begins to waver. All of these ups and downs and ins and outs are laid on by a stellar cast, and the performances are, to a man, excellent. Carey Mulligan tackles a complex and demanding role with assuredness and distinction: this is a coming-out party which puts most others to shame, and an Oscar-nod is surely in the offing. Peter Sarsgaard is perfectly cast as David, offering the easy charm and smooth sophistication, offset by an unsettling undertone, which comes so naturally to him. His British accent may waver once or twice but overall it is solid, and he makes the role his own. The support cast more than holds its own: Olivia Williams and Emma Thompson (no surprise) are first-rate as Jenny’s teachers, and Dominic Cooper likewise as David’s ‘chum’ and ‘business partner’. Yet the show is, if not stolen then certainly intermittently borrowed, by Alfred Molina. An actor of the highest order for over 30 years now his performance should come as no surprise, yet it is still notably magnificent. As Jenny’s protective and demanding father he pitches his portrayal perfectly, giving the character depth, complexity and compassion. One scene in particular, in which he talks to a distraught Jenny through her bedroom door, is utterly superb. Academy take note.

In addition to such a high-quality cast, Lone Scherfig has excelled behind the camera. The direction and screenplay combine and compliment each other as they ideally should, and both the narrative and setting are handled with subtlety and sagacity. Nothing is overplayed or taken to a caricatured extreme – an easy temptation in some regards, particularly with regard to setting and certain elements of characterisation. The pacing is good, the palette inconspicuous but effective, and the intelligent humour in Hornby’s writing (of which there is plenty) is well portrayed.

An Education is an excellent film. It is a well-told, engaging, and charming story that asks just enough pertinent questions to lift if above being one girl’s tale, but never in such a way that focus is lost or the core content diluted. From top to bottom this is an effort that passes with flying colours.