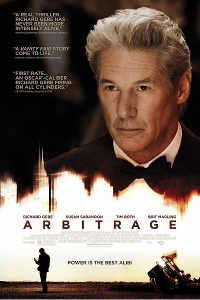 It’s starting to look like you need an Economics degree to watch movies. Last year, there was a small gem of film called Margin Call that, despite its incredibly legalese name, managed to be a gripping and insightful look into the backstabbing and ass-covering antics of Wall Street cronies. It was a fairly good movie, despite the fact that most people didn’t know what ‘margin call’ meant (even after they’ve browsed the Wikipedia article).

Now, in his directorial debut, Nicholas Jarecki brings us Arbitrage, which boasts an equally esoteric name sourced from a finance-centric vernacular, but, like Margin Call, has appeal beyond its cryptic title. Anchored by a magnetic performance from Richard Gere and an elaborate, if sometimes convoluted, story, Arbitrage is a slick suspense thriller that consolidates its few valuable assets. Richard Gere is Robert Miller, a high-rolling New York City hedge-fund magnate who is in way over his head. A charlatan, pompous and with severe delusions of grandeur, Mr. Gere puts in an effective rendition of Michael Douglas’ Gordon Gekko, and although he never says that “greed is good”, it’s quite clear that he believes this to be true.

Although immaculate and PR-perfect on the outside, Miller is balancing a whole host of potentially volatile calamities on the inside. For one, he is cheating on his wife Ellen (Susan Sarandon) with a French art dealer named Julie (Laetitia Casta).

For two, he is trying to sell his trading empire to a major bank before his history of fraud and chicanery catches up with him. After the sale, he plans to abdicate his high-standing position to his brilliant daughter and heir-apparent, Brooke (Brit Marling).

With the future mapped out in front of him, Miller seems destined to coast down easy street until a freak car accident puts him under the suspicion of NYPD detective Michael Bryer (Tim Roth). In danger of exposing the many skeletons in his closet, Miller tries franticly to erase the trail of evidence that follows him in a desperate attempt to protect himself and, in his own mind, the people around him.

Like its main character, Arbitrage functions as a precarious juggling act, managing and maintaining its many recognizable influences. The movie will periodically alternate between a Wall Street­–type examination of greed, to a Margin Call-type exposé on the financial system, to a Headhunters-type suspense thriller. Mr. Jarecki will occasionally slip and fumble in his treatment towards the plot, but, in general, Arbitrage never truly drops the ball, consistently immersing you in the complexity of its serpentine story.

However, this isn’t to say that the narrative is extremely taut and without flaws. As mentioned before, Arbitrage will become too complicated and hard to follow at points, with unnecessary and frivolous red herrings (something about a hospital cheque) muddling the already convoluted storyline.

Additionally, Arbitrage is ideologically inconsistent, ending on a detached and unsatisfactory note. For the majority of the movie, Mr. Jarecki permeates the story with underlying themes of justice vs. integrity, of the rich being immune to the consequences of their wanton actions, and of money being the end all and be all.

We get a strong sense of these sentiments, but Miller never does, and by the end of the film, we wonder if he’s learned a damn thing at all. Perhaps he hasn’t, and perhaps, like most entitled fat cats, he never will, and perhaps that’s exactly the point. Regardless, there’s a strange lack of comeuppance in the movie that may leave you feeling empty.

The main standout in Arbitrage is, without reservation, the performance of Richard Gere, and although we’ve seen a similar type of character played in a lot recent movies (call it the ‘Don Draper’ syndrome), Mr. Gere manages to make the character his own. With a confident, smug swagger, he plays the smarmy tycoon with believable vigor and it’s such a shame that he has to carry the film by himself.

The supporting cast, especially Ms. Sarandon and Ms. Marling, are forgotten for long stretches of time in the movie, leaving their characters raw and underdeveloped. When they do appear on screen with the scenery-chewing Richard Gere, their performances feel underwhelming and pale in comparison.

Nevertheless, it’s clear that Arbitrage is a Richard Gere vehicle, and the movie excels and excites when it’s firmly focused on his character’s story. First-time director Nicholas Jarecki helms the movie with a competent hand, making Arbitrage a worthwhile matinee viewing, regardless of whether or not you know what ‘arbitrage’ even means (commence Wikipedia search).