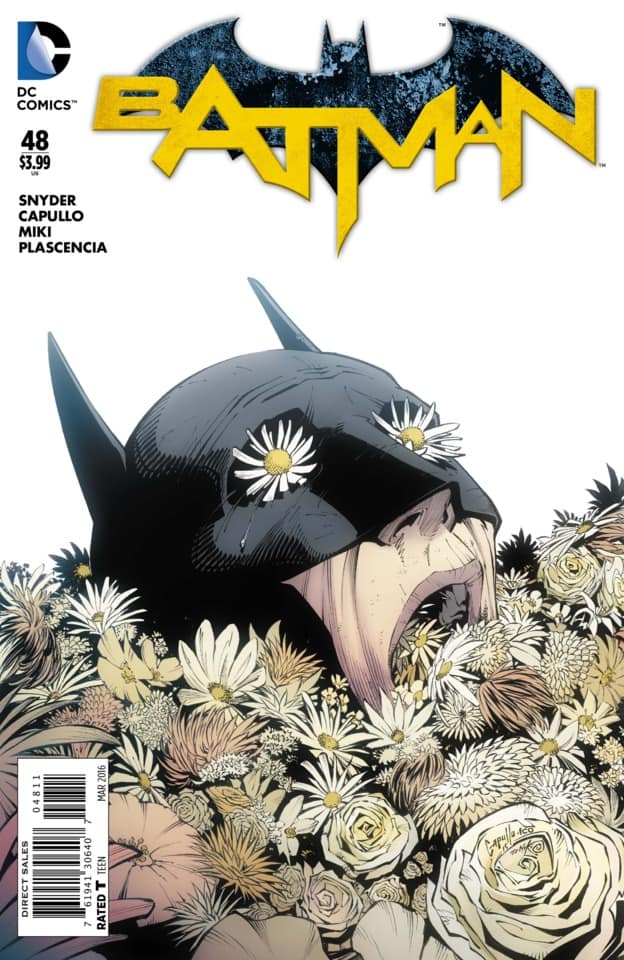 The latest issue of the “Superheavy” story arc doesn’t even feature a Batman in it. Gotham’s current Batman Jim Gordon doesn’t even have a cowl to wear in this issue. It’s not as if the cowl makes the Batman but while Scott Snyder and Greg Capullo have been telling their Batman stories through metaphors and homilies. So a Batman without a cowl is a very symbolic thing in their comics. That’s to say nothing about the meaning in a recovering amnesiac Bruce Wayne having a discussion with a thin, pale man who may or may not be Batman’s deadliest foe. With no clear Batman, Batman #48 focuses on the void that is created when Gotham does not have its hero.

When that happens, what is there to substitute for the Batman and does someone in a bat-themed suit calling themselves “Batman” really satisfy the absence? The answer in this issue would seem to be chaos as Mr. Bloom spreads his power-inducing seeds throughout Gotham, trying to rally the people against the system that made Batman into a cop. Parading an unmasked James Gordon through the streets of Gotham city, not high rises and towers but through the apartments, tenements, and neighborhoods where people actually live and struggle, Bloom is the chaos that fills in that void.

But the void is also filled in by visions of the Joker, here seen as a man as broken as Bruce Wayne sitting on a park bench with a pistol in a paper bag. And the vision begs Wayne, “… don’t go back to being who you were… You’re Bruce Wayne. You can stop it all from going back to the way it was!” So here’s Bruce Wayne trapped in a fairly diabolical plan laid out by Snyder and Capullo; an unknown threat spreads quite literally like wild weeds through Gotham while one of his oldest villains pleads with him to not go back to the old ways. What is a son of Gotham supposed to do here? 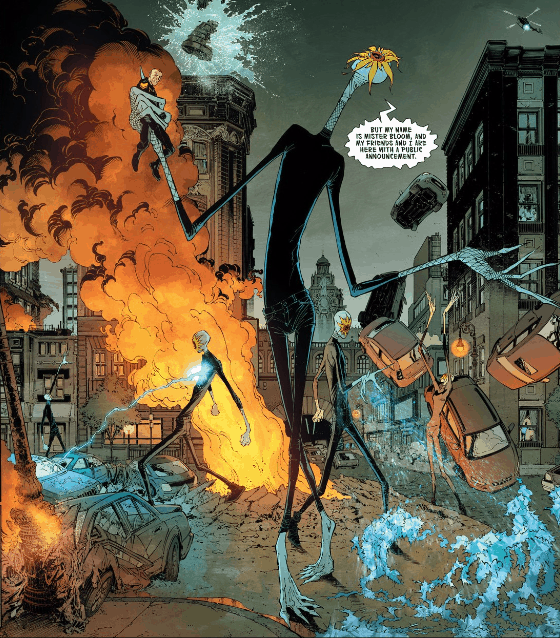 Capullo, inker Danny Miki and colorist FCO Plascencia wonderfully convey this struggle between what was and what is. Their Bruce Wayne in this issue is a conflicted man; one who remembers more and more of who he was while desperately wanting to become more of the man he is here and now. He’s not a hero but a good son of Gotham who’s trying to give back to the city in ways that he could never have before the Joker’s last rampage. And Bloom, this gnarly, spindly giant threat is something that Gotham hasn’t seen before. He is the weed trying to infest the garden and succeeding. He’s defeated James Gordon, parading him through the city streets showing its citizens that its new protector is really nothing new. If these are the last days of Gordon as Batman, Capullo and Miki show him as the conquered old man that he may really be.

Batman #48 goes through the paces to re-align the Batman story to the direction it’s supposed to be headed in, with Bruce Wayne as Batman. The self-correcting nature of these large universes, where Peter Parker is Spider-Man, Steve Rogers is Captain America, and Superman has amazing powers under the yellow sun, is maybe the one true guiding force of superhero comics and Scott Snyder has the unenviable task of storytelling within a world that always wants to get back on the correct path. He can concoct new ways to show the unending struggle between Batman and the Joker, he can introduce new threats to Gotham, he can try to let the supporting cast like Gordon have their own stories but this issue makes it very clear that Gordon cannot be Batman. That he IS not Batman. 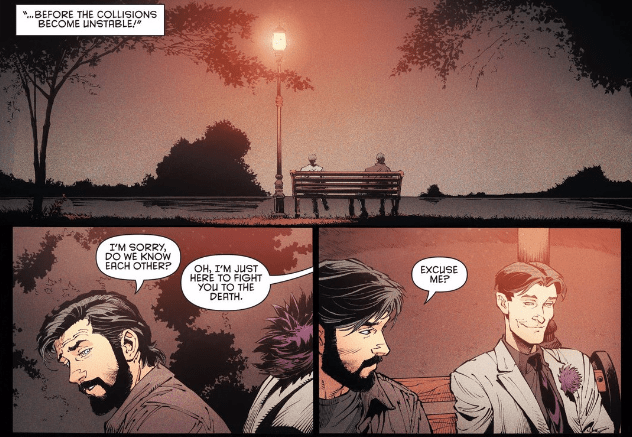 But what Snyder can do is reframe the struggle of Bruce Wayne. His Bruce Wayne is not a man haunted by his parents’ death but a man who sees a life beyond the life of Batman. Snyder has confronted him with a man who might be a brother, with a killer that wants to attack Batman through his “family,” and with a Gotham City that has never quite revealed all of its secrets to the Batman. So instead of Batman and the Joker locked in an eternal struggle for the humanity of Gotham City, Snyder shows two men sitting on a park bench on a hazy night far away from the chaos of Mr. Bloom. Wayne is remembering who he is even if he’s not too sure why or how.

And then there’s Wayne’s companion, the thin, pale man with a gun in a paper bag. And the man asks Wayne to just be Bruce Wayne, and not the Dark Knight he was but the man that Gotham city may need now. He asks Wayne to clean out the predators of the pond using his influence as Wayne now cares about the “smaller things.” He asks Wayne this even as a new madman declares war on the powers that be in Gotham City. While we thought Batman had died and been replaced, this issue of “Superheavy” shows that the battle continues to be over Bruce Wayne’s soul. The battle isn’t between good and evil but it’s between whether Wayne can just be a man or whether he needs to be the hero. Gotham still needs its Batman, but Snyder and Capullo are questioning whether Bruce Wayne needs to be Batman. And right now the answer looks like that there’s no other man alive who could possibly be Batman.