Home
Entertainment
‘Before I Disappear’ is a droll, trippy pleasure
Prev Article Next Article 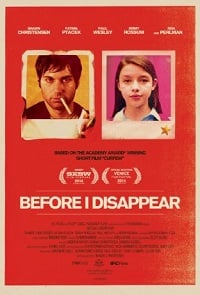 Before I Disappear
Written and directed by Shawn Christensen
USA/UK, 2014

We don’t get many cinematic one-man shows these days.  Shawn Christensen takes up the challenge by writing, directing and starring in the new indie mind-screw, Before I Disappear.  Though thin on plot and heavy on convulsions, there’s enough visual flair and wickedly-dark humor to reward your patience.  Psychedelic-noir gets mashed-up with The Odd Couple, and it works a lot better than you might imagine.

Richie (Christensen) would love to kill himself, if only his damn telephone would stop ringing!  Even though he just slashed his wrists and downed a bottle of pills, life won’t allow him the courtesy of a dignified death.  He’s just about to throw his phone out the window when he gets a call from his estranged sister, Maggie (Emmy Rossum).  She’s in a bind and needs Richie to watch her precocious 11 year-old daughter, Sophia (Fatima Ptacek).  It’s a fool’s errand and Richie is just the fool to accept it.

What follows is a night-long journey into hell that plays out like a buddy comedy, as told by Hunter S. Thompson.  Richie crosses paths with every scumbag lurking in the dark alleyways of his life.  His current boss (Ron Perlman) is at war with his former boss (Paul Wesley) over a dead girl that Richie found.  And just for good measure, Richie is being haunted by his former girlfriend, who just happened to kill herself.  Clearly, playing Sophia’s tour guide through his fucked up life is exactly what Richie doesn’t need.

Adapted from his 2011 Oscar-winning short film, Curfew, Christensen wisely modified the script to keep Ptacek as his co-star.  She’s terrific as Sophia, who functions as Richie’s judgmental alter-ego while still maintaining her own vulnerability.  Both characters are isolated from humanity; Richie through his aimlessness and Sophia through her compulsive perfectionism.  They have that special brand of delicate, free-flowing chemistry that keeps people together despite an obvious dislike for one another.  Sure, we get the perfunctory scenes of Sophia doing homework in a bowling alley, or making friends with goliath bodyguards, but she also serves as the perfect comic foil to keep Richie from spinning out of control.

It’s the visual flourishes of Richie’s dissociative episodes that really spotlight Christensen’s skill as a filmmaker.  Highlighted in vivid red and neon, Christensen pushes all the right neo-noir buttons as Richie stumbles through a surrealistic nightmare that keeps you questioning his sanity.  A throbbing soundtrack propels the story forward, distracting you from a threadbare premise stretched well beyond the breaking point.  That Christensen maintains a relatively consistent tone, even with such disparate story and genre elements smashed together, is a testament to his growing confidence as a filmmaker.

As screenwriter, however, Christensen struggles a bit.  This story is clearly too thin, despite being crammed full of colorful supporting characters and snazzy visuals.  Sophia, though presented as a strong-minded character with her fair share of trust issues, falls too quickly under the sway of Richie’s blithering charm.  This makes the end of the story feel less organic than the beginning, as if Christensen had trouble reconciling Sophia’s pluckiness with Richie’s personal growth.  The dialogue is noticeably slick in places, introducing a decidedly unwelcomed (and unnecessary) Tarantino vibe.  Christensen’s dynamic visual style  and warped sensibility are enough to lend Before I Disappear indie credibility; there was no need to dial-up the verbal sparring.

As an actor, Christensen is extremely raw, but he has a natural charisma that holds the camera’s attention.  Again, he sometimes plays things a bit too cool, but it’s still a pleasing contrast to Ptacek’s no-nonsense delivery.  Perlman doesn’t get much to do as Richie’s current addiction enabler, but Wesley has some intensely creepy and dangerous moments as Richie’s former addiction enabler.  It would be nice to get more from Rossum, but she’s mainly just a plot device to introduce Sophia into the story.  Ultimately, the movie succeeds or fails based on Christensen’s performance, and he does a convincing job channeling Mark Ruffalo, circa 2000.

Before I Disappear is an auspicious feature-length debut for Shawn Christensen.  Fans of the droll and off-kilter will find plenty to like here, and general audiences might appreciate its unique take on a familiar genre.  Whatever the case, Mr. Christensen has proven himself a capable filmmaker with this passion project, and it will be interesting to see what he tackles next.