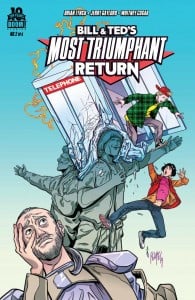 Are you ready to have the most righteous adventure? In Bill’s and Ted’s Most Triumphant Return # 2, Bill and Ted work with Chuck, their would-be murderer, to improve Chuck’s life by getting him friends and a girlfriend. The comic delivers a fair time with spot on characters depiction, tender and deep character moments, and humorous artwork. However, the comic does not come without its flaws in iplot and characters. If you are willing to endure these imperfections, then Bill and Ted will provide you with a fair and funny time.

Lynch  show the main characters of Bill, Ted, and Chuck with care and attention to detail. Bill and Ted continue to rock their rad attitudes from the film and keep a genuine desire to be friendly and cool. Lynch   also kept the gestures and habits that are well known of the rocking duo alive such as their air guitar motions and their humor. Yet Lynch  makes questionable choices on characters’ motivation such as Bill and Ted assisting their would-be murderer get a girl and friends. When Bill and Ted reflect on their choice, they decide on helping Chuck as it seems like the right choice. Lynch does create Chuck as a semi-sympathetic character because he is blamed and made an outcast for his future self’s murder of Bill and Ted. As a result of the lack of friendships and outcasting, Chuck does try to kill the Bill and Ted in his timeline before he gets sidetracked by his crush. Chuck himself does admit he lacks the means to express himself in a society based on different understandings than his own. Lynch  gives a hit and miss performance on their characters.

Gaylord  presents well thought-out backgrounds of the futuristic setting and character expressions. For example, the school Chuck attends as hologram screens for students to their and flying chairs to sit in. The setting does not feel like a modern take on what the future would be like. Instead, Gaylord creates the setting to reflect the one shown in the film. It is heavily influenced by the ideas of what the future would look like in the 1980s. Next, the character expressions show a vast scale of different emotions. In the moment, Chuck first attempts to kill Ted and Bill, he gives a mocking smile and tries to target the duo. It is slightly humorous at first before the reader can realize Chuck means business. Gaylord  work to give the comic a solid relationship to its film predecessor.

Bill’s and Ted’s Most Triumphant Return # 2 may not have the most thrilling of plotlines and strange character motivations. Yet, it has a good heart. The creator did the best they could and made Bill and Ted shine for what they are popular for in their characters, while giving them tender and personal character moments. The creators even work to make the reader feel almost sorry for Chuck and his difficult experiences. So if you are a fan of the film, you will find the comic rad for its references, humor, and characters. If you are not a fan of Bill and Ted, you can always give it a look to see some call backs to the totally rad 1980s. 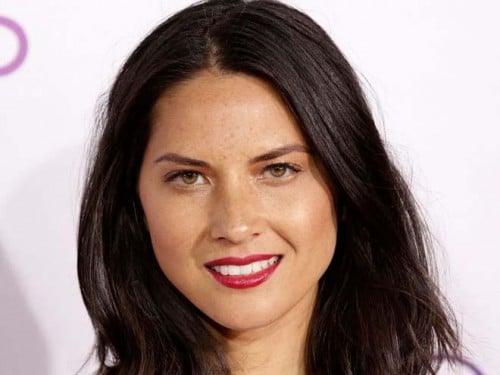