The Austin Powers franchise directly leans on the Bond franchise as the source for its parody, yet one thing that stands out is how the two differ in their treatment of women. For many, the womanizing of Bond and the disposable nature of his women are enough to be put off the series. While the Powers franchise mimics the Bond franchise in having a new leading lady each time out, there are enough differences to say it has a superior gender portrait.

One of the first changes is that Austin is a much more flawed character. Right away in International Man of Mystery we see Austin humbled as he is unfrozen in the 90s, clearly out of place. His womanizing behavior (and awkward appearance) that was prized in the 60s is seen as absurd to Miss Kensington’s eyes in the 90s. He is now more an object of pity than of adoration. The Spy Who Shagged Me introduces the loss of Austin’s mojo as his main source of weakness, making tangible his competence or confidence and how crucial it is to his self-worth, with the necessary tidy message that it is actually in his head, not his other head. It also mocks him with the opening twist predicated on his poor/selfish performance as a lover, having overlooked foreplay. Finally, Goldmember throws in a lack of self-esteem due to insufficient attention from his father as the source of Austin’s weakness. Taken together, Austin is much less pure/heroic as a lead character than Bond. 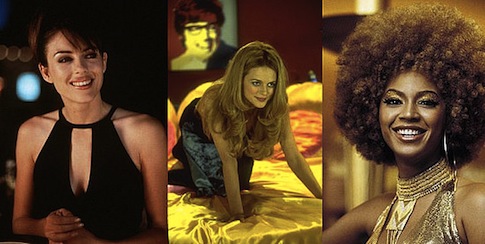 The female leads, on the other hand, are more solidly built. Too often, in this genre, the female characters become damsels in distress, needing to be saved by a man. This franchise does fall victim to that toward the end of the second film, though it gives Felicity Shagwell a chance to be the stoic in the process, knowing the mission comes before such soft things as romance. Instead, it is often the women saving the day here. Miss Kensington is the one who figures out how to get off the platform to escape death by ill-tempered sea bass. She is the one who escapes a hostage situation near the end after Austin’s gambit fails. Felicity Shagwell also is crucial in orchestrating their escape from an elaborate death, guarded only by one incompetent henchman. She’s also far more savvy about the scientific side of spying while Austin just goes from his unreliable gut, which occasionally results in old ladies being punched out.

They are interesting in terms of sexual interactions as well. Kensington demands Austin treat her with respect and not just another shag while Shagwell is a fully empowered sexual being who can give as good as she gets. Together they capture a broad spectrum of female sexual attitudes that cannot be easily stereotyped. Further, the second film specifically calls out a double standard when Austin gets upset about Shagwell using her sexuality for the job much as he did in the first film. On the flip side, you get Austin’s battle with the fembots to see who can tempt the other to doom, suggesting a man’s sexual power can be as much as a woman’s. This is a bit undercut by the series playing male sexy as funny and woman sexy as sexy but is otherwise a nice reversal of the standard narrative.

This leaves the very best part of the trilogy, Frau Farbissina. Sure, the series plays up lesbian stereotypes a bit and has a running joke about her voice being grating but she’s a rare character within the genre that does not exist primarily for her sex appeal. You get a balance of a stern, efficient subordinate to Dr. Evil with a softer side, such as her protecting Scott. While she isn’t sold on sex appeal, she isn’t created as a non-sexual character either. She has a romantic fling with Dr. Evil. Crucially, they don’t treat the encounter as more of a joke than any other in the series. It isn’t trying to say it is funny because she isn’t ‘sexy’. 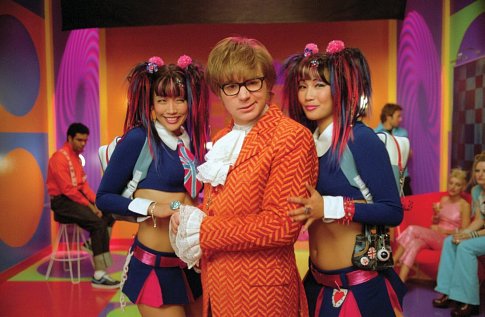 For all the praise the series deserves for its treatment of gender issues, Goldmember does a lot to lose this goodwill, both on the gender issues and for general quality. This starts with Foxy Cleopatra, easily the weakest female lead character of the series. While Foxy Brown is an important character in the history of gender in film, this version is just an empty recreation. You also get the Japanese twins near the start that manage to be both a bit sexist and a bit racist in their stereotypical depiction. Finally, Dr. Evil makes sure to inform everyone around that no one else (other than Scott) in his gene pool “runs like a girl,” an entirely unnecessary derogatory gender-based joke. It seems that having run low on ideas in the franchise by that point, they got as lazy in gender politics as they did with the body humor. Oh well, it was good while it lasted. 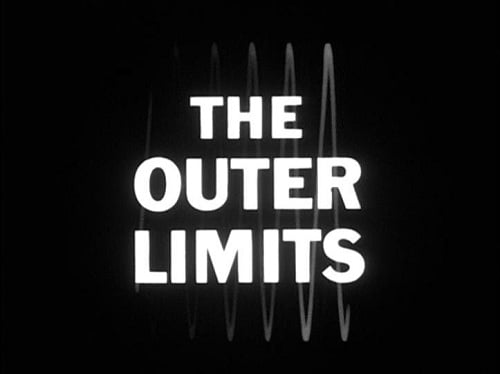