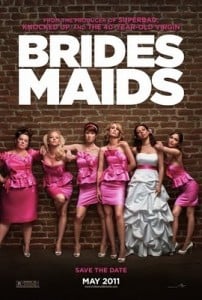 Due to an incompatible temperament and worldview, I think it’s fair to say that Judith Butler would make a terrible Hollywood executive. But the radical feminist thinker does have one thing in common with slick-talking producers and studio suits: both think of women with a sense of unease. Not any individual woman, mind you; no single actress or ticket buyer.  Nor any specific value that can be termed ‘feminine,’ which can be packaged in images and marketed as well as anything else. No, the apprehension is about women as a category – an amorphous group constituting more than half the population, but varying widely in terms of culture, class, age, geography, and desires. What do women want? It’s hard to answer when women are more easily defined not by what they are but by what they are not. Or, as Butler wrote in Gender Trouble, “The very subject of women is no longer understood in stable terms, it has become troublesome, a site of contest, and a cause for anxiety.”

That anxiety has become a hot conversation topic within the movie industry these days, and, as Tad Friendly suggests in her New Yorker profile of the vibrant comedic actress Anna Faris, there is new hope that it can somehow be turned into a successful business model. Friendly points to the recent, albeit modest, successes of female-centric films like Easy A and No Strings Attached, and the hopes being pinned on upcoming films like What’s Your Number? (staring Faris) and Bad Teacher (staring Cameron Diaz). Of course, all these films are comedies, which have long been the only films that Hollywood has marketed to women for no other reason than that they have a broader appeal than any other genre save superhero and mega-tent pole flicks, and compared to those comedies are cheap to make.  But the current wave has little in common with the comedies of Nora Ephron and Nancy Meyers, which are as light and polite as a glass of white wine. These new films are bite-y and raunchy, aspiring to send up contemporary sexual politics woman’s-eye view. Their limited commercial success shows that the aspiration has reach, but that the films themselves have so far been lacking shows that something in the core calculation is misplaced.

The latest, and if the billing is to be believed, bitey-ist and raunchiest of the bunch is Bridesmaids. The film, which stars Saturday Night Live’s Kristen Wiig (who co-wrote along with Annie Mumolo), 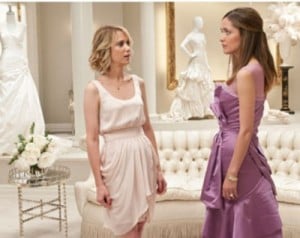 is directed by tv veteran Paul Fieg, and produced by Judd Apatow, arrives with almost impossible expectations. Not only is it expected to be a hit – and opening receipts suggest it will be that – but it is being hyped as the one film that will appeal to men as much as it does to women, causing men to forget for two hours that they are laughing and identifying with the opposite sex. The hype is not totally baseless, but it only glances at what makes Bridesmaids one of the most radical comedies in recent memory, and it certainly doesn’t stop to try to understand it. Bridesmaids is a radical film not because it seeks to invert the ways in which one gender is privileged over another in our cinematic culture, but because it wants to side-step the issue – not to ignore it, but to show how superficial and false it really is.

More importantly though, Bridesmaids is hilarious. Wiig plays Annie, a failed pastry shop owner forced to work in retail, share a house with two grating, hairless British siblings, and settle for a tacky casual sex arrangement with a dolt named Ted (Jon Hamm, perfectly drained of all his Mad Men charm). But it is not until her best friend Lillian (former SNL-er Maya Rudolph) announces that she is getting married that Annie really begins to crack. Saddled with the Maid of Honor duties, Annie finds herself trying to wrangle a motley bridal crew (Ellie Kemper, Wendi McLendon-Covey and Melissa McCarthy), and vying for control of the proceedings with Helen (Rose Byrne), the uber-rich wife of Lillian’s fiancé’s boss. As the series of events leading up to the wedding go from bad to worse to worse still, Annie becomes smitten with a fetching Irish state trooper named Rhodes (Chris O’Dowd).

The humor in Bridesmaids is certainly screwball, but never ridiculously so. The movie keeps a pretty naturalistic feel, even among some great random sight gags, including Annie’s mom’s watercolor 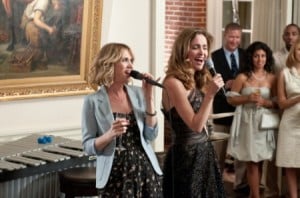 paintings of country musicians, and the worst, most infected tattoo you have ever seen. Primarily though, this is a comedy of humiliation.  Each pre-wedding event escalates in cringe-worthiness, as Fiegg subtly and ably finds maximal ways to frame the horror Annie feels as her shortcomings are physical and emotional exposed. It is Wiig who makes that embarrassment palpable, through a deft touch underlying her propensity for wacky physicality. In scene after scene, Wiig finds the perfect twitch or vocal inflection to suit the particular indignity, whether it is arguing with a teenager customer (the first time I have laughed at the word ‘cunt’ in some time), a full-blown drug-induced freak out on an airplane (“What kind of name is ‘Stove?’  What are you, an appliance?”), or reluctantly enjoying a glass of pink lemonade (“Damn that is fresh!”).  But it’s her total meltdown at the unbelievably gaudy bridal shower that shows just how strong her chops are, as she wails and flails and rages against pastries, only to be ultimately crushed under a giant cookie.  The scene also pits Wiig against Rudolph in a gut-busting screaming match over Paris and bleached assholes, in which both actresses feed off of and into each other’s neurosis.  In that scene and many others between Wiig and Rudolph, it becomes clear that the film’s most brilliant decision was to forego the usual inch-thick mask of makeup on the principle actresses’ faces, allowing for their natural rubbery expressiveness carry the jokes.  What’s more, that expressiveness creates memorably individual characters on screen, who relate to the audience and each other not just as women but as people.

Relationships are at the heart of Bridesmaids, but they are relationships built on individual motivations, not stereotypes.  This is particularly true of the rivalry between Annie and Helen, which is initially setup as a classic catfight with each woman vying for domination and validation in traditionally female social rituals (an impossibly long series of one-upping toasts at the engagement party tests the audience’s ability to laugh at prolonged pettiness), but is far more driven by their similar insecurities, loneliness and uncomfortable relationship to money (Annie has none while Helen thinks its completely appropriate to give someone a flight to Paris as a bridal shower gift).  The same is true of Annie’s relationship with Ted and Rhodes.  Her inability to ditch the former and get with the latter is not owed to manufactured misunderstandings or some sort of clichéd deception on the parts of the men, but is rather a product of her deep self-loathing, a problem we have come to associate on screen with Seth Rogen-types.

Actors like Rogen have also become our template for physical comedy through gags that proudly expose their unflattering physiques, which conventional wisdom has held is strictly a male mode of humor. Bridesmaid’s rebuttal comes in the form of Melissa McCarthy as Megan, the overweight, socially graceless sister of Lillian’s fiancé.  Megan is loud, aggressive (especially sexually – stick around through the credits) and totally oblivious to why others would think she should be ashamed of her body. In his New Yorker piece, Friendly quotes David Zucker as saying that audiences have an aversion to laughing at women’s bodies suffering indignities, which might make intuitive sense, but also misses the point.  When McCarthy throws her large frame around onscreen, falling over couches or stroking her calf while trying to seduce a U.S. Air Marshall, the joke isn’t that she is fat. Megan is like the Chris Farley character in the famous SNL Chippendales audition sketch – the joke is that she is fat and she is going for it.

If there is one scene where Bridesmaids most follows McCarthy’s lead and just goes for it, it is – well, you know what I’m going to say already.  After eating some bad Brazilian food, the bridal party 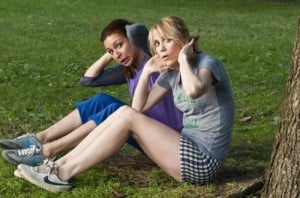 heads to a chic boutique for dress fittings, only to violently succumb to food poisoning. There is sweating, vomiting, vomiting onto someone else’s perfectly coiffed hair, defecating in a sink, and the piece de resistance: Lillian shitting herself in a wedding dress in the middle of a street. The scene is raw and made all the more visceral by the lack of overt sound effects, but it also doesn’t play on the fact that those involved are women (there are no menstrual gags in the film).

In his smug, specious article Vanity Fair “Why Women Aren’t Funny,” Christopher Hitchens correctly observes that the source of most comedy is the disconnect between the dignity of the human mind and the ghastliness of the body. But he then goes on to say that women, with “their tender hearts,” have an innate physical dignity attached to child birth. But only a fraction of a woman’s life has anything to do with reproduction, and reproduction is not intrinsic to some sort of fairer sensibility. If anything, the dress fitting scene is a wonderful reminder that through two out of three holes, men and women experience the world in virtually the same way.

Rumor has it that the dress-fitting scene was added largely at the behest of Apatow, which has led some to deride its authenticity. “I’m not convinced that women would have as easy a time as men getting past a public trauma this hideous,” writes David Edlestein in New York Magazine, but what would the alternative be? (Or, as my girlfriend put it when I read her that line, “Does he think that women share a secret ritual of post-diarrhea harikari?”)  It is not the essence of these women that is being violated in that moment; it is the socially-constructed trappings and ascriptions of modern femininity being torn down. I can think of no better illustration of Judith Butler’s assertion that “Gender is the repeated stylization of the body” than a perfect white wedding dress covered in feces. Except Judith Butler could never be that fucking funny”.
–