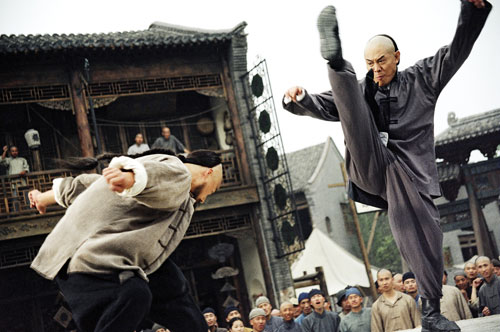 –
Because of the nature of my website and the fact that a bulk of the writing is dedicated to the horror genre, it is often assumed that Cinema Suicide is all about horror. And you have no idea how much that bugs me. The original mission was a website in celebration of genres and trashy stuff but it just so happens that most of the goofy stuff that produces news these days is in the horror genre. But did you know that I also love kung fu movies? Yeah! I totally do! I love The Shaw Brothers, Jackie Chan, Bruce Lee, Jimmy Wang Yu, Donny Yen, Gordon Liu, etc. So I’m going to twist this week’s Bodycount to suit my frustration with being pigeonholed as the resident horror guy and throw some Asian spice into the mix. This week, it’s all about horror with a chop socky twist.
For a very long time, the Hong Kong film industry rigidly maintained its groove of period martial arts movies. Much like the Western cottage industry of Hollywood in the 50’s and 60’s, Hong Kong’s martial arts output mostly took place during the Qing Dynasty, which weighs in right around the same time that American settlers were heading west, furthering the comparisons between Westerns and Kung Fu movies. They rarely deviated, however. Legends of the Shaolin fighting corrupt royal representatives and protecting the peasantry from tyranny were a limitless store of plot possibilities. However, heading into the 80’s, that trusty old formula started to run out of gas. Sure, they still made movies about Wong Fei Hung and Fong Sai Yuk but Hollywood influence was gaining a strong foothold in the Hong Kong industry and a new demand grew for updated, even contemporary settings. The result came in the form of cross-genre films that matched up the usual martial arts antics of Hong Kong past with newer ideas in the film industry. The trend experienced a few hiccups in the late 80’s as John Woo and Ringo Lam styled two-gun craziness dominated Hong Kong box office but has enjoyed a resurgence in recent years. Below you will find a few significant martial arts and horror crossovers.
– 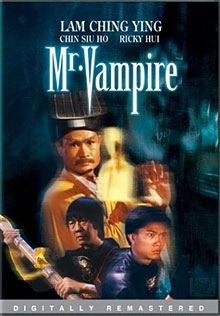 Mr. Vampire, 1985
Dir. Ricky Lau
Mr. Vampire is not the first martial arts meets horror mashup in Hong Kong cinema history, but it’s probably the biggest success story. The premise is simple, a priest and his goofy assistants are charged with the burial of a man who turns out to be a Jiang Shi (hopping vampire) and they spend the rest of the movie trying to stem his killing spree. And if managing a rampaging vampire isn’t hard enough, Priest Kau has to deal with his idiotic disciples. Mr. Vampire features some outstanding martial arts and even though it’s not particularly scary, it features a spooky atmosphere that comes off like a Roger Corman directed production of a gothic vampire movie put on at the local Chinese take out restaurant. It’s further twisted by exceptionally low-brow comedy bits by the disciples. Mr. Vampire, produced by Hong Kong legend Sammo Hung, was massively popular, spawned four sequels, a series of spoofs and the Priest Kau character who, like the villainous Pai Mei/Pak Mei, appears here and there in other movies not directly related to Mr. Vampire. Though it’s loose with the legendry, it’s an interesting reflection of Chinese folklore and the Chinese take on the vampire myth.
_ 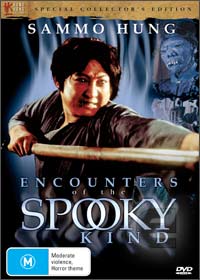 Encounters of the Spooky Kind, 1980
Dir. Sammo Hung
Hung wrote, directed, choreographed and starred in this goofy horror comedy that pits a macho dimwit, played by Hung, against a wicked taoist priest, hired by his wife’s lover. The priest throws monster after monster at him, including hopping vampires, zombies and ghosts but his wicked kung fu skills keep him one step ahead of the bad guy. Hung is one of the Peking Opera originals who, along with Jackie Chan and Yuen Biao, dominated Hong Kong box office in the 70’s, 80’s and 90’s. Their combined talents in the acting, stunts, fighting and production world directed action and comedy trends during those three decades and Encounters of the Spooky Kind is proof of that influence as this is one of the first horror/comedy/kung fu flicks. Asian comedy is often plagued by sillyness and most of the time it flies right over my head but Encounters of the Spooky Kind is funny in the same way that Evil Dead 2 is funny. Physical slapstick is on the menu!
_ 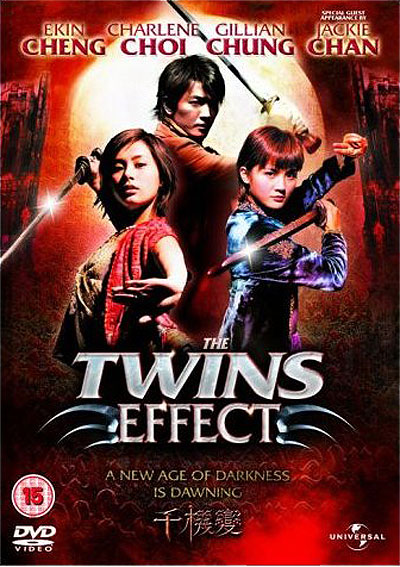 The Twins Effect, 2003
Dir. Dante Lam
After Hollywood had swallowed up most of Hong Kong’s legends and cast them playing second fiddle to Owen Wilson and Chris Tucker (okay, I guess by that I mean Jackie Chan), Hong Kong, at a loss for actors that were also trained fighters and stuntmen, turned to the world of pop music, which had kept a safe distance from the movies up until around 1998 when Cantopop singer, Aaron Kwok, invaded the movies in the supremely sweet, The Storm Riders. This opened the floodgate for other singers to make movies and inevitably the cutesy pairing of The Twins (Gillian Chung and Charlene Choi), a musical duo that can hardly even sing, were cast as vampire slayers in this silly horror action movie that has more in common with the American Blade movies than the hopping vampire goodies of the past. The last of the vampire Royalty must stop an evil duke from using his bloodline to make him invincible. He’s aided by a vampire hunter, his bungling sister and her friend. The Twins, themselves, aren’t particularly bad and the action is actually quite good, aided by some good special effects, a guest appearance by a bewildered looking Jackie Chan (who has been known in the past to cameo here and there based on Triad pressure) and the support of Ekin Cheng and Edison Chen who lays bare the charming, charismatic qualities that make him such a hot commodity in the industry. Though, I’m told a recently surfaced sex tape cooled Chen’s career considerably.
_ 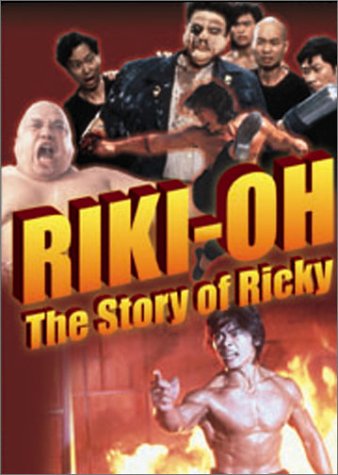 Riki-Oh: The Story of Ricky, 1991
Dir. Lam Ngai Kai
Remember when Craig Kilborne hosted The Daily Show and he did that 5 Questions segment with his guest? They played that awesome clip of the guy smashing the other guy’s head to pieces with his bare hands. That scene is from this movie. Riki-Oh, The Story of Ricky isn’t really a horror movie by definition. If you were to compare it to other exploitation categories, it has more in common with Jailsploitation flicks that lifted all their moves from Cool Hand Luke. But Story of Ricky has something that most prison movies don’t have. Super powered villains, gallons of blood measured in fluid tonnage and explosive violence unlike any martial arts movie up to that point. In 1991, American horror wasn’t even going to these lengths. Ricky goes to jail for the murder of a drug dealer and while in prison he uses his supremely devastating Qi Gong martial arts prowess to protect the timid, frightened prison population from a super powered gang of thugs who operate on the evil Warden’s beckon call. It hardly makes much sense but is so wildly over the top that it qualifies as the rarest of bird, a truly unique martial arts movie. One like you’ve never seen. They still haven’t made a movie like this. Story of Ricky was so violent, indeed, that it called for a new Hong Kong rating category that was above the IIB rating, which is a pretty hard R rating in the United States. The result was Category III. The dreaded Cat3 opened new doors in Hong Kong exploitation markets that led to deliriously, deeply unsettlingly violent pictures like Ebola Syndrome, Centipede Horror and Untold Story.
Horror tends to go in and out of vogue in Hong Kong as it is the nichest of niche and has to contend with high octane box office juice like period kung fu costumers, Wu Xia, and the collision of Heroic Bloodshed and traditional contempo kung fu themes. However, when the Chinese get down to it, they spare no quarter. They tend to blend comic themes into their horror as if the sheer desperation of straight up fear and terror is too much for cinema goers to bear and that, in itself, is an interesting quality. I’ll have to follow this up next week with the trends in Japanese horror since the recent popularity of J-horror has successfully managed to overshadow the deeply troubling J-horror of the 70’s and 80’s.