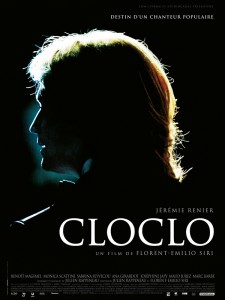 Claude François is not an artist whose name resonates very much in North America, yet his impact on the French music scene was second to none during his envious career, which spanned from the early 60s to the late 70s when he met an unpredictable death while attempting to screw a light bulb back in properly while in the shower. Truth be told, his impact on the North American music scene may be greater than most people even realize. The legendary ‘May Way’ song, most famously sung by crooner Frank Sinatra and from which the film derives its international English language title, was originally a French song written by Claude François, ‘Comme d’habitude.’ Florent-Emilio Siri’s film adaptation of the French icon’s life, Cloclo,  was released on the silver screen early this year to coincide with the anniversary of his passing.

Given that Claude François (Jérémie Renier) dies when he was but 39 years old, the movie affords to depict, in its 2 and one half hour run time, essentially all of the significant chapters in the artist’s lifetime. Beginning in the 1930s when his family lived in then still colonial Egypt, the François’ are forced to leave when a military coup breaks out in a flash. The family, father Aimé (Marc Barbé), mother Chouffa (Monica Scattini), sister Josette (Sabrina Seyvecou) and Cloclo has his father once affectionately called him head back to the land of their roots, France. Some years later, the young adult Claude, madly in love with the music scene, much to his father’s dismay, who would rather see his boy earn a consistent living as a bank employee, tries his hat at various clubs as a mere drummer. His taste for taking chances eventually land him into the laps of some music industry types who award him a chance to record some material. While his first ever record, promoting a hybrid style between contemporary French and Egyptian music, fails to make any impact, Claude is not one to easily give up. His future attempts to hit a chord with the French public, sending Claude into stardom. Throughout the years he reinvents his style to stay trendy, all the while experiencing personal struggles, chief among them his many doomed loves like first wife Janet (Maud Jurez), girlfriend France Gall (Joséphine Japy) and second wife Isabelle Forêt (Ana Giradot). 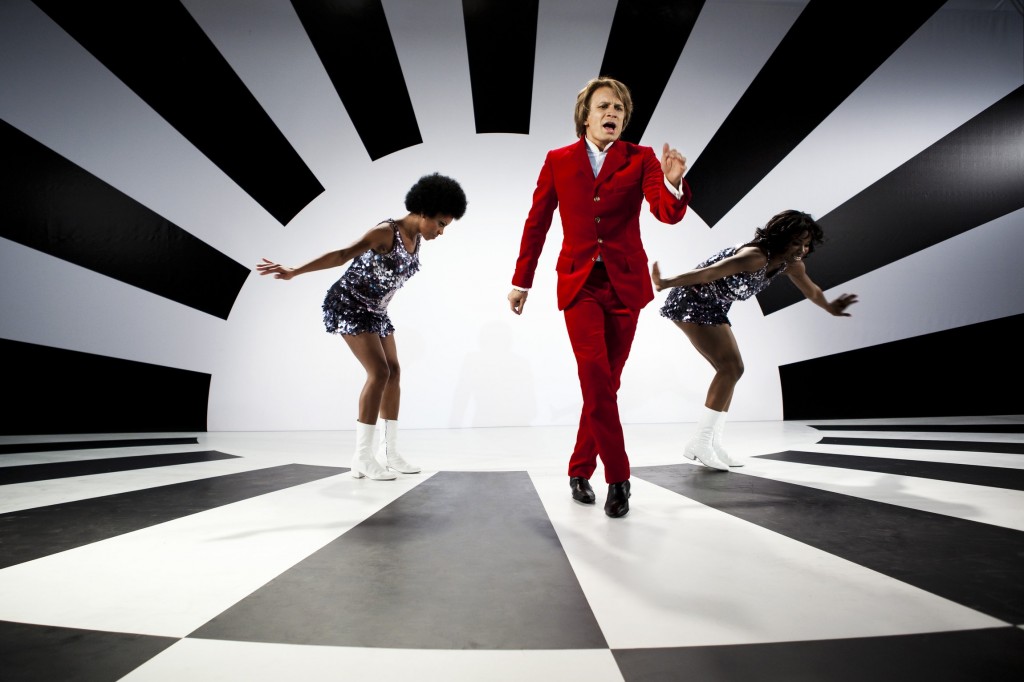 To be perfectly and as plainly honest as can be, there are very few people to fault for how Cloclo develops as a cinematic story. Jérémie Renier, obviously looking dedicated to giving the role his very best shot, gives a lively, three-dimensional performance in which Claude’s many strengths and weaknesses are brought to light for all to see. Some of the best moments in the picture are not even when a significant emotional beat happens, but rather during the simpler, purer moments when Claude is sitting around with some trusted musicians, wanting to come up with a new hit song. They play some strings on a guitar, Claude half mumbles some words while following the tune and a few minutes later, presto, a surefire hit is born! Had the movie been about these moments, more specifically about how the artist came up with these songs and what his inspirations were, then the film, decidedly more narrow in focus, could have been all the more thrilling to watch. Such moments do exist, although they are far and few between when spread across Cloclo‘s 148 minutes. Seeing Claude visit the United Sates and witnessing African Americans perform some jazzy, funky, soul dance music, then a cut to Claude in the recording studio essentially belting out a French jazzy, funky soul song are fun, truly inspiring moments for how they offer a glimpse into the creative process within the music industry. Where musical influences can come from and how malleable they are when in the hands of truly creative people, something Claude François was, is genuinely interesting to watch. 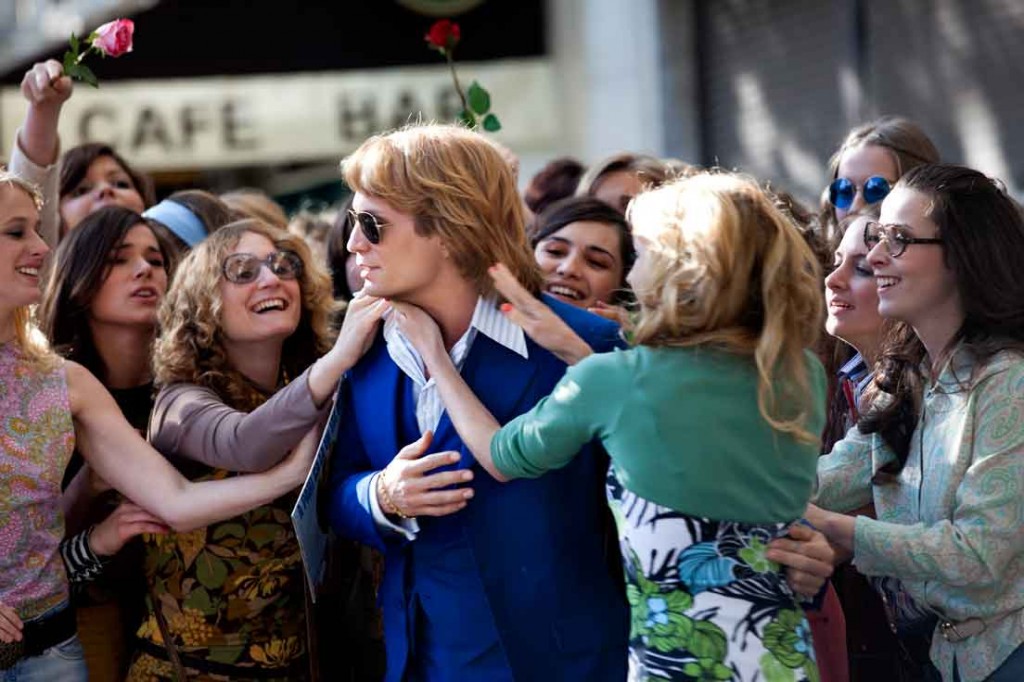 Florent-Emilio Siri’s desire, however is far more on par with what the vast majority of biographical films about great iconic figures concentrate on: the generalities of the their lives, a wider canvas of what made them who they were in the public eye and who they probably were offstage or whatever behind scene they made a name for themselves with. The issue starts to arise when the viewer realizes that Claude François’s life was not so much different from that of many other music stars. He came from humble beginnings, his decision to devote his career to music irked part of his family (in this case the father), the road to fame and fortune was set with many hurdles, some professional and others quite personal, and once the protagonist made it big, he failed to properly deal with all the variables which can arise, such as growing overconfidence, snobbishness, infidelity, and even drug related problems. Naturally, not every music star goes through this process. If that were the case some of them would have second thoughts about venturing into the business in the first place. That being said, the overall story of Cloclo is comparable to that of many others. Ray jumps to mind, for example. It has gotten to the point where even fictional stories of the same ilk follow the similar trajectory, hence making the biopics based on real facts all the less inspiring, which is a shame because they should have the opposite effect on viewers. To walk out of a film like Cloclo wherein the lead character goes through so many trials and tribulations, losing and rediscovering a sense of happiness all in one far too short lifetime, the reaction should not be ‘Well, we’ve seen that a bunch of times.’ 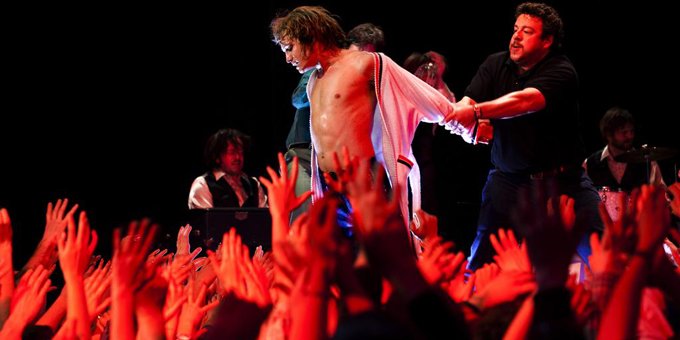 What this leads to is a serious question of who the film is for at all. General movie goers thirsty for something even slightly original risk coming away thoroughly disappointed. Biopic fans have seen this story before and more than once, so it is unclear what they could get out of it either. The answer, arguably, lies in the fact that in France, where he was most popular, the film was scheduled to come out within the same week of Claude untimely death (he died on March 11th and Cloclo was released theatrically this year on March 14th). It hints that the film is for Claude François fans, the die hards who will gladly eat it up. Good for them too. The film is neatly produced, features, unsurprisingly, a soundtrack rife with the man’s greatest hits and Jérémie Renier is a lot of fun to watch in it. What’s more, it does not seem like the film is even interested in appealing to anybody else, which causes one to wonder how large its international appeal will be (it opens, for example, in Montreal this Friday, June 29th).

Perhaps those questions, as well as the answers to said questions, are irrelevant. The fans will love it assuredly and that was the point all along. So, Claude ‘Cloclo’ François fans, this is the movie you have been waiting for, provided you were waiting for a Claude François biopic at all. Dig it, have fun, and remember the good times when he brought funk, soul, light rock and disco to France, and did so with undeniable panache. For the rest, well, you can give your Ray blu-rays or DVDs another spin.