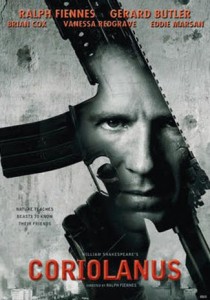 Ralph Fiennes’ directorial debut is a worthy attempt to adapt one of Shakespeare’s lesser-known tragedies, which features one of his most ambiguously-heroic heroes, to the screen. This film has a lot going for it. Fiennes’ modern rendition is not only true to the play but enhances its political themes. The cast is superb, led by Fiennes himself as Caius Martius and featuring excellent performances by Brian Cox as Menenius, Vanessa Redgrave as Volumnia, and James Nesbitt and Paul Jesson as the suitably smarmy Tribunes Sicinius and Brutus. At times, the screenplay is fairly clever, especially considering that watching a film that based on a familiar play is like reading a foreign translation of a familiar tongue. However—and I am truly disappointed to write this—it doesn’t quite work out.

That said, let’s start with what works. Fiennes’ Coriolanus takes place in a modern “Rome” (with a nod to John Osborne) strongly evocative of the Balkans (where the film was shot, after all), complete with the BBC newsroom, Arab Spring-style civil disobedience, riot police, talk shows, and squad-based urban warfare. However, this setting is not mere window-dressing. There is no feeling, as with so much badly done Shakespeare, that wayward Elizabethans are playing dress-up out of place and time. The poetry itself, which makes Shakespeare so difficult for so many people to approach (see note) feels natural, as though it is merely foreign language-inflected English. John Logan’s screenplay—at least, initially—fits Shakespeare’s script to the film’s setting quite elegantly.

An example: the first scene of the film (cry “spoilers” and die—the play it’s based on is over four hundred years old) has citizens meeting to organize their protest against the price of grain, but rather than being interrupted by Senator Menenius in person, as in the play, he addresses Rome’s citizens over the TV. Of course, Caius Martius doesn’t interrupt their meeting either. Rather, he and his riot police interrupt their attempt at storming Rome’s central grain storage. The essential beats of act one, scene one remain intact. Shakespeare’s language, cleverly trimmed but not rewritten, remains the scene’s essential structure. However, it has become adapted with the strengths (and weaknesses) of film in mind.

With all the adapting and abridging going on, it is perhaps surprising that the story remains Shakespeare’s. Lesser adapters and inept readers of Coriolanus tend to interpret the play in either authoritarian or populist terms, failing to note that Shakespeare is critical of both political impulses. Fiennes respects the play. After Caius Martius’ breakdown and verbal tirade toward the citizens of Rome (corresponding to the end of act three in the play), the film loses momentum. The tension dissipates. The stakes don’t feel high, and they ought to—after all, Caius Martius and the Volscian general Tullus Aufidius are marching on Rome. Yet, the same Rome once rocked by grain riots and political demonstration barely feels menaced, Vanessa Redgrave’s impressive performance notwithstanding.

What went wrong? In Elizabethan theatre, which is organized into five acts, the climax occurs in the third act—the remaining two acts are for falling action and resolutions. Of course, modern dramatic structure doesn’t work this way. We tend to like the entire film to build up to a climax close to the end, which presumably helps us ignore consequences. Fiennes’ film puts the climax in the centre, perhaps to its detriment.

This aside, I must reiterate that this Coriolanus is a worthy attempt. It is a decent directorial debut for Fiennes, and I look forward to seeing what he does next. Fans of the Bard should make a point of seeing it. However, it is not brilliant. Some performances (especially Vanessa Redgrave’s) are, but the film as a whole is not. It will be a shame when some, not drawing a distinction between Shakespeare done well and Shakespeare done at all (i.e., jackasses) start mumbling “best picture.” That said, rumour has it that Fiennes is considering tackling Julius Caesar next. Here’s hoping that he does.

Note: Shakespeare did not, as is commonly misunderstood, write in Old English or in Middle English. He wrote in Early Modern English, which is grammatically fairly similar to what we speak today, though its lexicon is certainly different. The main difficulty people run into concerning Shakespeare is his masterful use of complex poetry.