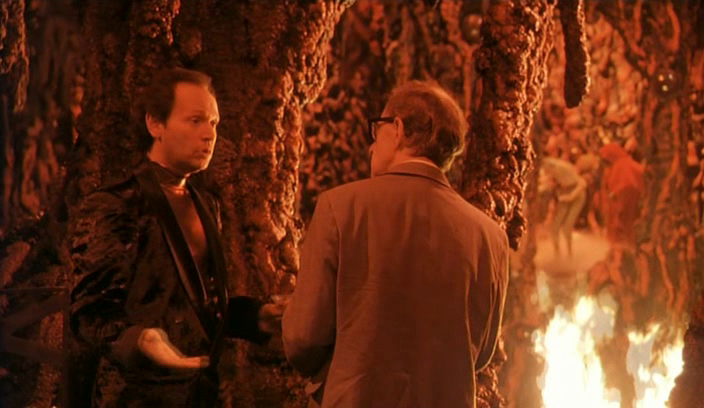 Like many Woody Allen protagonists, Harry Block is neurotic, damaged, and unhappy. Plagued with writer’s block and haunted by a string of failed relationships, Harry is searching for inspiration and meaning in his life. As he faces the fact that his ex-girlfriend is getting married and that he is unable to find anyone to come with him to an awards ceremony honouring his work, his sense of reality begins to fall apart. This is fitting, considering that Harry always found more happiness in his writing and imagination than in the real world.

Deconstructing Harry is as funny as it is harrowing. The film is a self-indictment on someone who doesn’t really know how to live without hurting those around him. Harry holds onto the impossible idea that everything will work out for the better. For Harry, art and writing have always allowed him to find control over his surroundings and the people within them. This has been a source of conflict, however, as his friends, family and lovers recognize themselves in his work and resent his often simplistic interpretations of them.

There does seem to be an exception though, only one person comes away relatively unscathed from Harry’s pen:  Fay. Played by Elisabeth Shue, Fay was never supposed to be an important person in his life. He met her while he was married to a professional viola player, and having an affair with her sister. Fay was far younger than the two of them, she was beautiful, she adored him, and on their first meeting, he made her promise not to fall in love. She only makes the briefest appearance in his writing: a scene where she and a Harry surrogate get trapped in an elevator and fall in love. The real version of their meeting was perhaps too sweet for Harry’s writing, it lacked humour, it lacked punch. But it might have been a more exceptionally beautiful moment than anything he ever wrote. 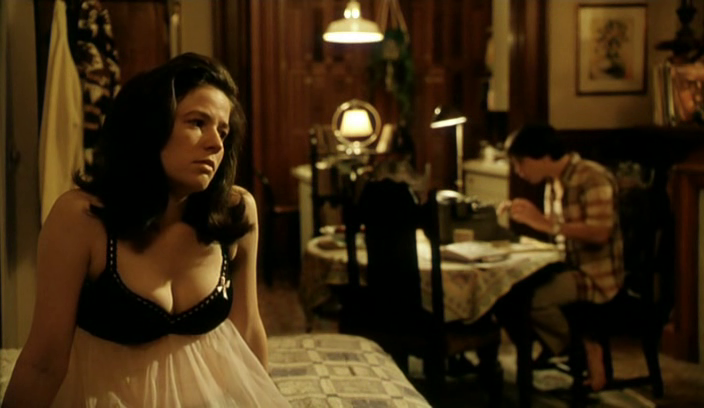 This moment stands out in a film filled with fantastic situations and outrageous reactions, perhaps because, unlike any other character, Fay fulfilled everything that Harry wanted. However, the scenes between Fay and Harry seem to be strung with a sort of melancholia, a sense of disappointment that Fay will fall in love and, like all of Harry’s previous loves, eventually be hurt by him. But it’s not how this scenario plays out. She stands out as an impossible goal, an image of perfection and someone who cannot be improved by his writing. It’s not quite clear if she is a symptom or a cause of his inability to find his artistic voice, but she becomes a pivotal force in his journey.

The fragmented energy of Harry Block’s mind is reflected beautifully in the tangential quality of Deconstructing Harry‘s writing and editing. As the film opens, it is not made immediately clear that we are dealing with the world of imagination, however close it might be to real events. As the film continues, so does this drifting quality, matched with jump cuts that create breaks in conversation and re-emphasize certain moments and points through repetition. Though not necessarily the most visually impressive films of Allen’s career, it is one of the most tonally cohesive, as form complements content so effectively. Few films in the history of cinema have so deftly been able to recreate a sense of anxiety without being abrasive. Here, anxiety is ever-present but can momentarily drift into distraction before returning with a manic, unpredictable energy.

Deconstructing Harry blends tragedy and happiness with a perfect tone of self-deprecation. Perhaps that is why we derive so much satisfaction from Allen’s films, even after decades of his work, there is a sense that a perfect version of reality might exist and we are the only ones standing in the way. The kind of overbearing sadness that hangs over his best films is an argument that we are the only ones holding ourselves back from happiness. Potentially even sadder is the idea that, while we are in complete and total control of our own happiness, a part of us will always betray that possibility and destroy it. But then, there is imagination, which almost makes up for the fact that we don’t always get what we want from reality.