Home
Entertainment
Doctor Who Ep. 7.02, “Dinosaurs on a Spaceship”: Action-packed episode overflows with fun and adventure
Prev Article Next Article 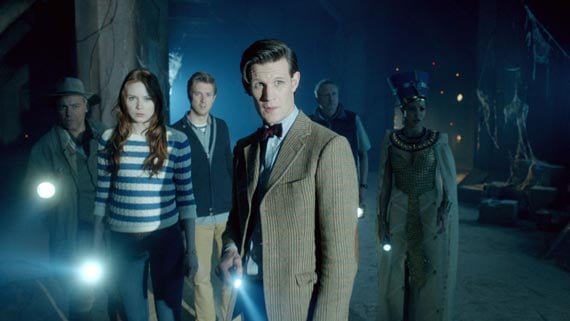 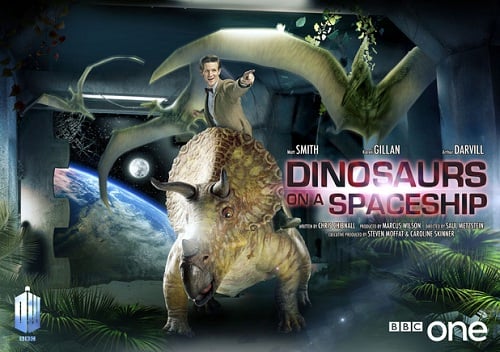 This week, on Doctor Who: The Doctor recruits a gang, including a Big Game hunter, Amy, Rory, Rory’s dad Brian, and Queen Nefertiti, to investigate a mysterious spaceship set to collide with the Earth 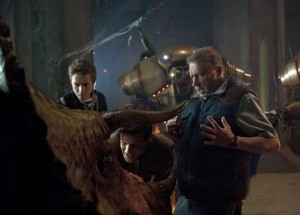 One of the great things about Doctor Who is its ability to morph genres week to week and season to season. What started as an educational children’s show has explored, at various points, buddy cop-style comedy, gothic horror, and high drama. For series seven, the focus seems to be foremost on fun and adventure and this episode delivers both in spades. It’s a well-paced story, with all of the new characters introduced and established in an economical opening few minutes. The story is refreshingly straightforward, with nary a twist in sight, and though the critical piece of the Doctor’s eventual plan is more than a bit convenient, the rest of the episode is so well structured the show manages to get away with it.

This is writer Chris Chibnall’s third script for Doctor Who (outside of the Pond Life webisodes that lead up to this series) and it’s definitely his best. The flirtatious banter between Nefertiti and Riddell is a bit much, but it does feel in character for both and bringing along Rory’s travel-phobic father Brian (Mark Williams) gives the episode an enjoyable arc. More importantly, Amy, Rory, and the Doctor each get significant moments to shine. 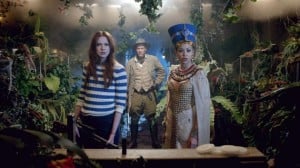 This is the best story for Amy in quite a while. She’s brave, intelligent, funny, and strong in every way. Karen Gillan is a blast to watch, filling Amy to the brim with confidence, a stark change from where the character was at last week. By separating the TARDIS crew into two trios, Amy becomes the de facto leader of her group and we see just how far she’s come in the past few seasons. It’s she, not the Doctor, who figures out the ship’s origin. She’s always been a resourceful and bright Companion, but here she nearly matches the Doctor. Her quiet scene with the Doctor, addressing her and Rory’s unique relationship with him (no other Companions have been part-time like they are) hints toward two possible ends for the Ponds in the TARDIS- with the Weeping Angels headed back later this year, anyone want to bet it’ll be the more distressing of the two?

Rory also gets a chance to show off his skills. It feels like forever since the show mentioned his role as a nurse; it’s great to have that brought back. By giving Rory that moment, really taking time for it, Chibnall shows the audience that there’s just as much badassery in healing, in keeping your cool and helping others, as there is in wielding guns, stun or otherwise. That, along with his piloting in the climax, which feels like a much better version of Wilt’s handiwork in “The End of Time”, makes this one of the better Rory episodes in a while as well. 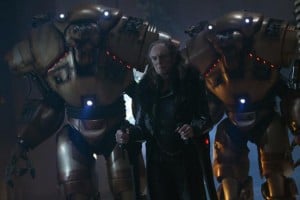 As for the Doctor, he’s the most relaxed we’ve seen him in a while. Perhaps this has to do with the now confirmed fact that the Universe seems to have forgotten him, particularly the Daleks, or perhaps he just really likes dinosaurs, but it’s nice to see him a bit more carefree. This makes his execution of Solomon all the more chilling, though. Obviously Solomon deserves what he gets here, but in the past, the Doctor wasn’t the one to make these calls- he’d save even his worst enemy if they were defenseless (and unable to attack him) and asked for assistance. Is this a continuation of the more cavalier Doctor from last week? It seems unlikely this will be addressed very long before the 50th Anniversary, but we’ll have to wait to see.

Outside of the character beats and action, the rest of the episode maintains a breezy tone and manages to make several things work that shouldn’t necessarily, at least on paper. The dinosaurs look great! It’s fantastic to see such great effects work on weekly TV, particularly when compared to some of the show’s earlier (post-2005) effects. The mention of the Silurians instantly puts the dinosaurs into a believable context, and the bumbling robots have enough bite to counteract their amusingly silly voices and dialogue. David Bradley is appropriately craggy and shifty as Solomon and while Nefertiti ditching Egypt and her throne to chill in the desert doesn’t ring true, the denouement with Brian (glad to have him as an honorary Pond!) is lovely enough that most probably won’t mind.

Next up, the Old West with, “A Town Called Mercy”. The last time the Doctor went to the American West, he got mixed up in the gunfight at the OK Corral and his Companions wound up singing and playing piano for their lives. Better luck this time?

What did you think of this episode? Anyone else surprised the most Girl Power episode of Doctor Who in ages doesn’t feature River Song at all? I like to think the Doctor and Brian dropped off the Ponds and went adventuring for a while- just me? Post your thoughts below!