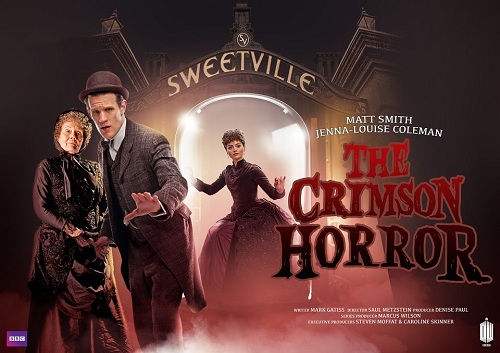 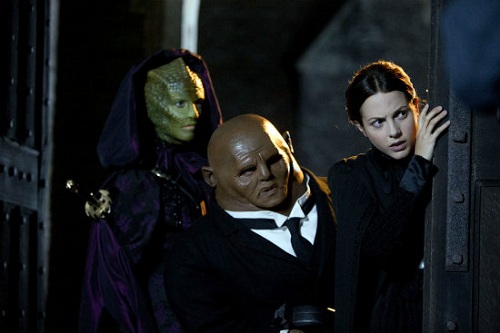 This week, on Doctor Who: Mrs. Gillyflower brings codependency to a new level, Ada finds a pet monster, and Jenny shows her mettle

For the second through fourth series of NuWho, the grind of production resulted in one episode each year referred to as “Doctor-lite”, which featured other characters and kept the Doctor to a minimal role (and gave lead David Tennant a couple days off). During the 11th Doctor’s tenure, there haven’t been any Doctor-lite episodes, for various reasons, and so there haven’t been any stories told from a perspective other than the Doctor’s. This week that changes, with fan favorites Madame Vastra, Strax, and Jenny taking the lead for “The Crimson Horror”, a ghoulish tale of murder and mayhem in Victorian Yorkshire.

Each time the Paternoster Gang show up, fans clamor for a spinoff, and it’s easy to see why. The trio of Madame Vastra, a brilliant Silurian detective and katana-wielder, Jenny, her human wife/housemaid/ninja, and Strax, an outcast Sontaran warrior-nurse, make for a lot of fun, particularly in their outrageously anachronistic setting of Victorian London, or this week, Yorkshire. Moffat has wisely meted out their appearances, though; as engaging as they are, even Strax’s vehement scolding of horses would quickly get old. After seasons of Doctory angst, most recently re:Clara, it’s refreshing to ditch the drama however briefly in favor of pure penny dreadful pulp. The Clara of it all comes back almost immediately once the Doctor staggers in, but at least our leads have as much reason to wonder at her as the Doctor. It’s a real shame we get so little of Clara interacting with the Paternoster Gang- maybe they’d actually be interested in her for more than her impossibility. 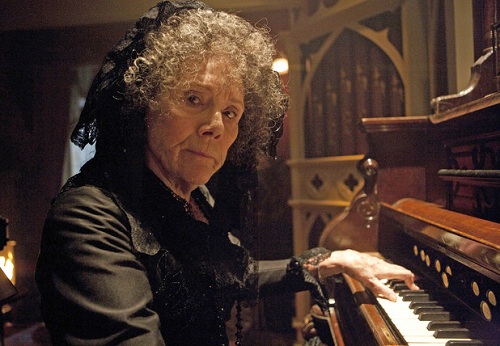 The episode itself is the most purely entertaining we’ve had all season and a big part of that is the central performance from Dame Diana Rigg as the cackling, mustache-twirling crazed madwoman, Winifred Gillyflower. From the opening moments, Rigg’s heightened performance combines with the cheekiness of Gatiss’ script to create a fully realized, highly memorable villain. She’s the most straightforward crazed scientist (of a sort) we’ve had in a long time and her final confrontation with the Doctor and Clara has strong shades of the 2nd Doctor’s antagonist from “Tomb of the Cybermen”, Eric Klieg (this fan spent the whole scene waiting for Smith to say something like Troughton’s, “Well, now I know you’re mad. I just wanted to make sure”). It’s fantastic to have a straight-up diabolical psycho for once- no childhood trauma, no instigating incident. She’s just a nutjob who happened across a primordial parasite and got big ideas. Rigg plays her wonderfully, introducing her as vaguely ominous and slowly dialing up the crazy, before kicking into full gear towards the end.

This episode marks the first opportunity for Rigg to perform with her daughter, Rachel Stirling, who is great as Gillyflower’s disfigured daughter, Ada. Gatiss’s toying with our expectations for her is fun- by the end she’s entirely sympathetic, but her introduction and then first scene, bringing food to some random monster in a cell, could put her on either side of the story. Keeping her sightless at the end of the episode is an appreciated bit of restraint- yes, theoretically the Doctor could whisk her off to points unknown and get her some robot eyes, but her resilience, once away from the toxic influence of her mother, gives a much better message to the children watching than a quick fix from the Doctor.

Speaking of the Doctor, there’s plenty to like from him this week. Matt Smith makes for an entertaining Frankenstein, another nice touch from Gatiss, and the Yorkshire accent is great, but the highlight is definitely the old-timey flashback catching the audience up on the Doctor and Clara’s path to Sweetville. It’s a touch of whimsy that fits well with the aesthetic without distracting from the overall cinematography and look of the episode, which is fantastic. As for Clara, her low-tech approach to problem solving is long overdue and while she gets very little to do, she does at least contribute.

Not everything works, though, and there are two main issues that stand out, one minor and one more frustrating. On the lower end of things is the Doctor’s heightened sexuality in the episode. His flirtation with Clara has seemed rather schizophrenic over this past half-season, ranging from omnipresent to almost nonexistent. It seemed like something the writers were backing away from, but it pops up again here, so getting a read on the relationship is proving difficult. More than that, though, the Doctor full-on dip kisses Jenny, ogles her, and generally seems good to go throughout the episode. Is this a trait we’re supposed to expect from post-River Doctor? *This* Doctor would’ve been all for Amy’s move in “Flesh and Stone”. *This* Doctor would’ve been raring to go with River in “Day of the Moon”. So is his behavior here out of character or is it supposed to mark growth and tell us that one of the Eleventh Doctor’s descriptors we’ll later reflect on is his role as the first horndog Doctor (though some might argue Ten holds that title.)?

The more frustrating issue, and only real problem, is the final scene. It feels horribly tacked on, is poorly written and acted, and features some truly dreadful photoshopping. Not only is it ridiculously contrived that in the course of the short time Clara’s been gone (the kids don’t seem to have missed her, so she can’t have been away from them very long) her charges have found incredibly fake-looking pictures that shouldn’t/couldn’t exist of her only two previous adventures on Earth, but it’s even worse that 1.) a picture of “The Snowmen” Clara exists at all, 2.) the kids find it, and 3.) Clara reads any meaning into it other than that she will travel to Victorian London sometime in the near future. What makes more sense to someone who’s recently discovered time travel, upon seeing a photo of themselves they don’t recognize? “Looks like I stop by there some time” or “Something sinister is going on/I have a doppelganger!”? This shouldn’t even raise an eyebrow for Clara. This would be less frustrating if the scene were even decently executed, but this feels lifted from a sub-par The Sarah Jane Adventures and it doesn’t leave this viewer with high hopes for the, again, utter contrivance of Clara’s charges accompanying her and the Doctor on an adventure next week, even if it is written by Neil Gaiman.

On the whole, though, this is a campy, fun, and very memorable episode of Doctor Who and one this reviewer looks forward to revisiting soon.

What did you think of this episode? Do you want to see a Paternoster Gang spinoff? Anyone else glad to see Jenny take the lead for once? Am I the only one this annoyed by that closing scene? Post your thoughts below!