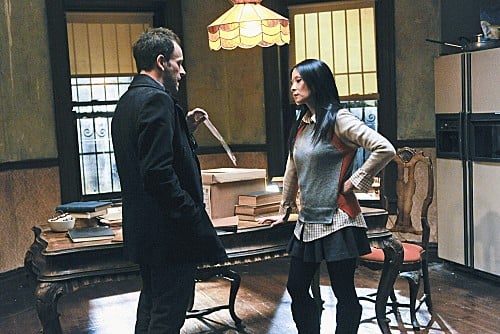 For the last three months, we have been through the ins and outs of Mr Sherlock Holmes as he cleverly solves cases all over New York.  But the memories of his past in London have always been teased, but never revealed.  Now, with the help of a most intriguing cold opening, we finally get under the skin of Holmes.  Hint: the clue is in the episode title.

“M” brings Holmes face-to-face with a criminal mastermind that he first encountered in London; one that stirs up buried emotions in the consultant.  As he has a second chance to deal with some unfinished business from his life in London, Watson struggles with the impending end of her contract as Holmes’ sober companion.

There is a sense of ‘finally!’ as we see tidbits of Holmesian references in this week’s episode.  Criminal mastermind with the initial ‘M’, a complex murder, Holmes emotionally affected by a simple pool of blood…there is that sense of intrigue but almost excitement as we get a clue as to Holmes’ pre-NYC.  The association with ‘M’ and Holmes’ career in London is quite a juicy plotline, allowing Miller to put in an intense performance as the conflicted consultant.  The magic touch is when he finally reveals how close Watson has become to him towards the end of the episode – as we see him broken and emotionally torn to pieces, his words tenderly echoes her earlier sentiments as her contract is drawing to an end.

Liu is, as always, great in this episode.  Her therapy session (cleverly echoing Sherlock for the first time in the series run!) shows her evident struggle in coming to terms with leaving Holmes.  We also see the true depth of their partner/relationship as he confesses the nature with his relationship with Irene and why he left London.  The scene with the two of them indicating conflicting levels of trust with each other is carefully and effectively done and it can be considered the turning point of their partnership.

Guest star Vinnie Jones, as criminal ‘M’, is portrayed as the typical British man – strong, silent but certainly not mysterious, who is content with beer and soccer.  He doesn’t try to ham up his character and be someone he isn’t so his subtle performance – compared to his other roles in film and television – doesn’t steal focus from the heart of the story.  It is surprising, however, that Captain Gregson wasn’t able to put two and two together concerning Holmes and the history of M’s crimes.  They knew each other in London so surely he must have had some indication as the criminal’s MO or insights to M’s past crimes and when Holmes blames himself for bringing the criminal to New York, Gregson is quick to defend him (when other cops would have quickly pointed the finger) – but as he is unable to contribute to the case itself, it seems that even in their many years of friendship, it has not reached the same intimate stage between Holmes and Watson.

Definitely the best episode yet and the first thing we have seen that closely related to the Arthur Conan Doyle’s character history.  Now the stage is set for the next chapter – and I can’t wait.