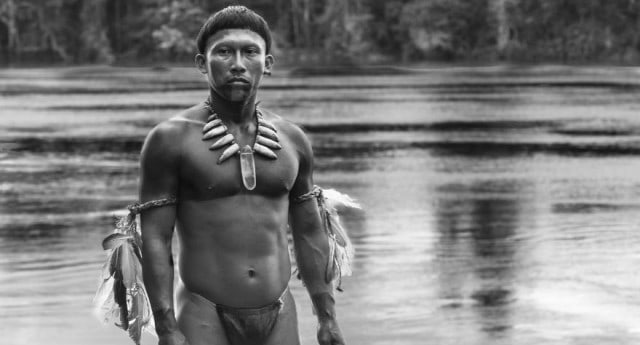 It’s a tricky matter, trying to describe the defining features of a national cinema. In some ways it’s foolhardy: film industries are made up of many different filmmakers, all with different styles, experiences, and resources. Comparing the films of directors such as Steven Soderbergh, John Favreau, Miranda July, and Zack Snyder doesn’t necessarily give any sense of a coherent American film cultural. But pulling back further makes it easier to see a film cultural that in general favors larger budget action and genre films, even though variation exists in smaller budget films toward the margins. Other national cinemas have their own common features, even though plenty of variation exists. The fantastic Colombian film Embrace of the Serpent falls outside of any of these national traditions; the Colombian film industry has required government-funded resuscitation every few decades and has failed to develop the kind of identity that other national cinemas have. Part of what makes Embrace of the Serpent so intriguing is how it exists outside of any film tradition, and yet tells a uniquely Colombian tale.

The film follows Karamakate, an Amazonian native skilled in tribal medicine. He is played masterfully be two actors: Nilbio Torres as a young shaman whose tribe is disappearing before his eyes, and Antonio Bolivar as the elderly lone survivor of his tribe. Young Karamakate is filled with rage at how white men are destroying his tribe, whereas Old Karamakate is going senile and is filled with sorrow for the culture that will be completely gone after his death.

The two versions of Karamakate take twin journeys with white men, as young Karamakate leads an ailing German scientist named Theo (Jan Bijvoet) to a rare plant that is considered sacred to his tribe. The flower has medicinal properties and is the only thing capable of treating the scientist’s illness. Intercut with their journey are scenes of Karamakate’s final trip to lead American scientist Evan (Brionne Davis) to the same flower decades later.

Karamakate can barely stand Theo because of how he represents European colonialism, but in some ways his anger is misplaced. Theo has a fascination and love for the native cultures, and his sole goal is to document them and preserve that knowledge. He has no allegiance with genocidal rubber barons, nor with racist Catholic missionaries. The older Karamakate is less distrustful of Evan, who initially seems more sensitive to his culture. But that is just a façade. Evan tries to fool Karamakate into giving up something quite valuable with a single American dollar, assuming he won’t know its true value. Later, it’s revealed that Evan is looking for the flower not for any scientific reasons, but to cultivate it for corporations, something that is forbidden by Karamakate’s tribe.

The two timelines of Embrace of the Serpent function as effective criticisms of colonialism. While ferrying Theo to the flower, Karamakate comes upon the remains of a rubber plantation. Theo’s companion, a native who has adopted European clothing, dumps all of the buckets that have been collecting the drippings from the rubber trees, but realizes that the buckets have been tended by a man who has already had his arm chopped off by the rubber barons. They will surely kill him now that the rubber has been destroyed. He begs the companion to kill him, a request to which he accedes. Later, Karamakate and Theo come upon a Catholic mission run by a racist monk who beats the native children and punishes them if they use their native language. The group of travelers accidentally kill the monk after witnessing him whipping a child. The old Karamakate returns to the missionary with Evan and discovers that the children have grown up warped by their exposure to Christianity and the monk’s hatred. In his absence, they have created a cult that worships a man who fancies himself a modern-day Jesus Christ and leads his followers in a violent and hedonistic lifestyle. The man is insane, and Karamakate and Evan are only able to escape when he grandiosely invites his followers to literally eat his flesh, which they do quite enthusiastically. The scene resembles an even darker extension of the God delusions of The Ruling Class.

Director Ciro Guerra’s choice to shoot in black and white, often a gimmick of art films to feign importance, works quite effectively here. A colored film might have romanticized and eroticized the vegetation of the jungle and its rivers, but the film resists that urge. It also represents the older Karamakate’s failing memory. He can remember the broad strokes of his past, but the details have faded away. In this case, the images remaining, but details like color are absent. The black and white contributes to the films realist style, but also makes the insane mission seem particularly frightening. The camera’s clinical eye refuses to look away from the mad remnants of the scourge of colonialism.

Embrace of the Serpent was nominated for the Best Foreign Language Film Oscar, the first Colombian film to receive that honor. The film doesn’t tell us much about the film culture Colombia, but remains a fascinating portrait of the destruction done to native Colombians by Europeans and Americans. Karamakate’s plight is only of many stories of people destroyed by these colonial forces. Embrace of the Serpent is the kind of effective treatment that story has so desperately needed.