Following in the footsteps of the CW’s Arrow and Flash (and to some extent, CBS’ Supergirl), Legends of Tomorrow is, despite the various levels of success of its predecessors, something of a bold move by its producers and network. Despite what it’s title winkingly suggests, it does not star the characters whom most long-time and casual comic book fans would consider the legends of the DC universe: there is no Batman, no Superman, no Wonder Woman. Not even an Aquaman. Instead, the central cast is comprised of second-or-third tier characters, heroes and villains alike, who have been previously introduced and developed (to varying degrees) on Arrow and The Flash. It is, essentially, a spinoff where instead of one significant character spinning off on their own, it is a spinoff by collective, where the whole is bigger than each of the individual parts.

With this odd assortment of collective supporting characters, villains, and guest stars now poised to carry their own show, here is a brief primer on each one, their comic book origins and where they stand in the CW’s DC Universe (aka the Arrowverse) as the series begins. 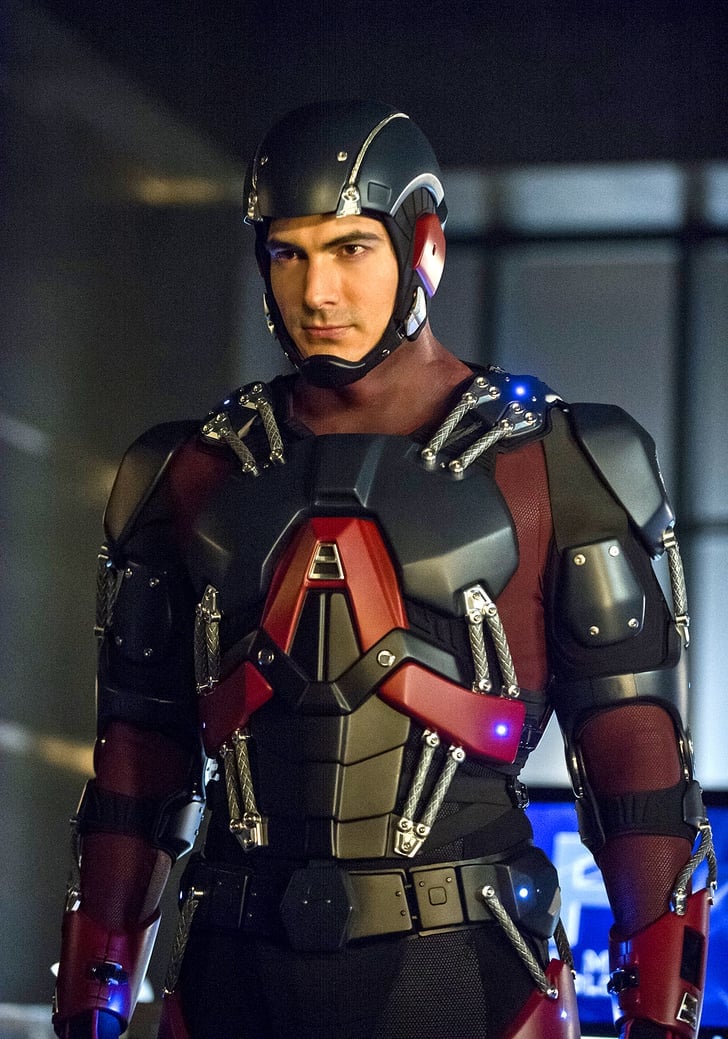 aka Ray Palmer
First Appearance: Showcase #34 (1961)
You Might Remember Him From: Super Friends

DC’s preeminent size-changing hero, Ray Palmer is a scientist who discovered a way to harness the energy of a white dwarf star in order to alter his mass, shrinking down to the size of his namesake (and beyond, in some cases). Like many of the superheroes introduced by DC in the late 1950s and 1960s, Palmer is a updated version of a World War II-era hero, given a sci-fi hook for his stories (the original Atom was merely a diminutive pugilist). And like many of the characters in Legends of Tomorrow, Atom has a long history with in the DC comic book universe, serving on the Justice League (often paired up with Hawkman, with whom he shared a comic book for many years) and finding himself at the center of several big events (like 2004’s Identity Crisis) but has never attained the level of popularity or fame of characters like Superman or Batman (or Flash and Green Arrow, for that matter). Introduced to a TV audience during the third season of Arrow, the Arrowverse’s Ray Palmer kept the scientist hook, but the size-changing angle came much later. Instead, Palmer created a suit of high-tech armor, which, combined with his role as a wealthy industrialist, positioned the character much more like DC’s version of Iron Man than his comic book counterpart ever was. 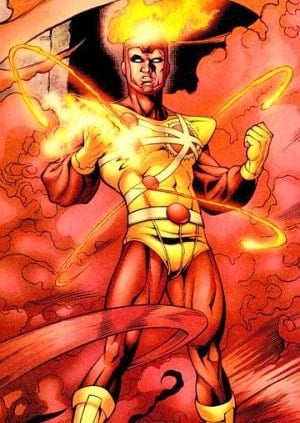 Created in the late 70s, by some accounts in an effort to tap into the youthful Everyman success of DC’s crosstown rival’s Spider-Man, Firestorm is a fairly unique character, in that he’s a gestalt form of two individuals. Originally, the pairing was comprised of scientist Professor Stein and jock Ronnie Raymond (the original odd couple!) whose shared expertise allowed them to use Firestorm’s ability to alter molecular structures to fight crime. But despite a strong visual design, a stint in the Justice League, and appearances on the animated Super Friends, Firestorm never quite caught on in his own right. Eventually, like many DC characters, Firestorm received an update, replacing the Ronnie Raymond side of the equation with Jason Rusch. While Legends features a third, original-to-TV, character in the driver seat, he maintains the tradition of the grumpy Professor Stein sharing a body with and advising a series of younger heroes. 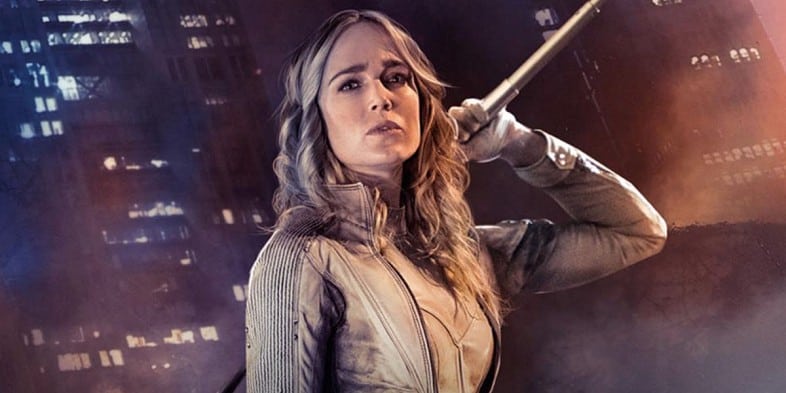 White Canary
aka Sarah Lance
You Might Remember Her From: Arrow

Though her role as the resurrected White Canary is (mostly) original to the Arrowverse, Sarah was introduced on Arrow as the show’s first Black Canary, a character with a deep history in comics and strong ties to Green Arrow across multiple eras. Considered at times to be a founding member of the comic book Justice League, Black Canary also served in the World War II-era-turned-legacy-building Justice Society of America (where she was teammates with both Hawkman and Hawkgirl), and the female-centric Birds of Prey group (where she regularly teamed up with former Batgirl-turned-computer master Oracle and occasional-Arrow foe Huntress). However, with Sarah’s sister Laurel adopting many of the familiar trappings of Black Canary on Arrow (including her supersonic Canary Cry) in the wake of Sarah’s death (and eventual resurrection), Sarah’s story as the new White Canary remains the most wide-open for interpretation of any of the Legends character. 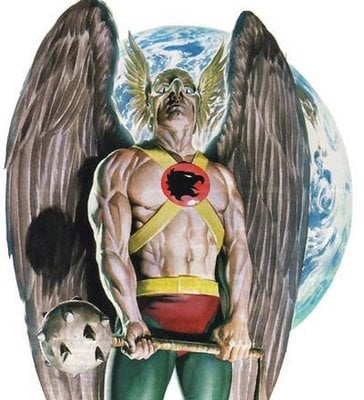 Hawkman
aka Carter Hall
First Appearance: Flash Comics #1 (1940)
You Might Remember Him From: Super Friends, Smallville

A character who has thrived for decades mostly on the strength of an iconic visual look (enormous bird wings and a cool helmet), Hawkman is, among many comic book reads, a one-word shorthand for the way the various relaunches and reboots carried out by comic book companies can muck with a character. At various times an archaeologist using an alien metal to fly, a reincarnated Egyptian prince, an intergalactic space cop, or all of the above, the key to making Hawkman work is finding a way to keep the character straightforward, despite all the different iterations in his past. A relatively recent addition to the Arrowverse, his creators there went with just one of the more simple approaches (the reincarnated prince); it remains to be seen if Legends can stick with that simplicity, and also do justice to his iconic visual on regular TV budget. 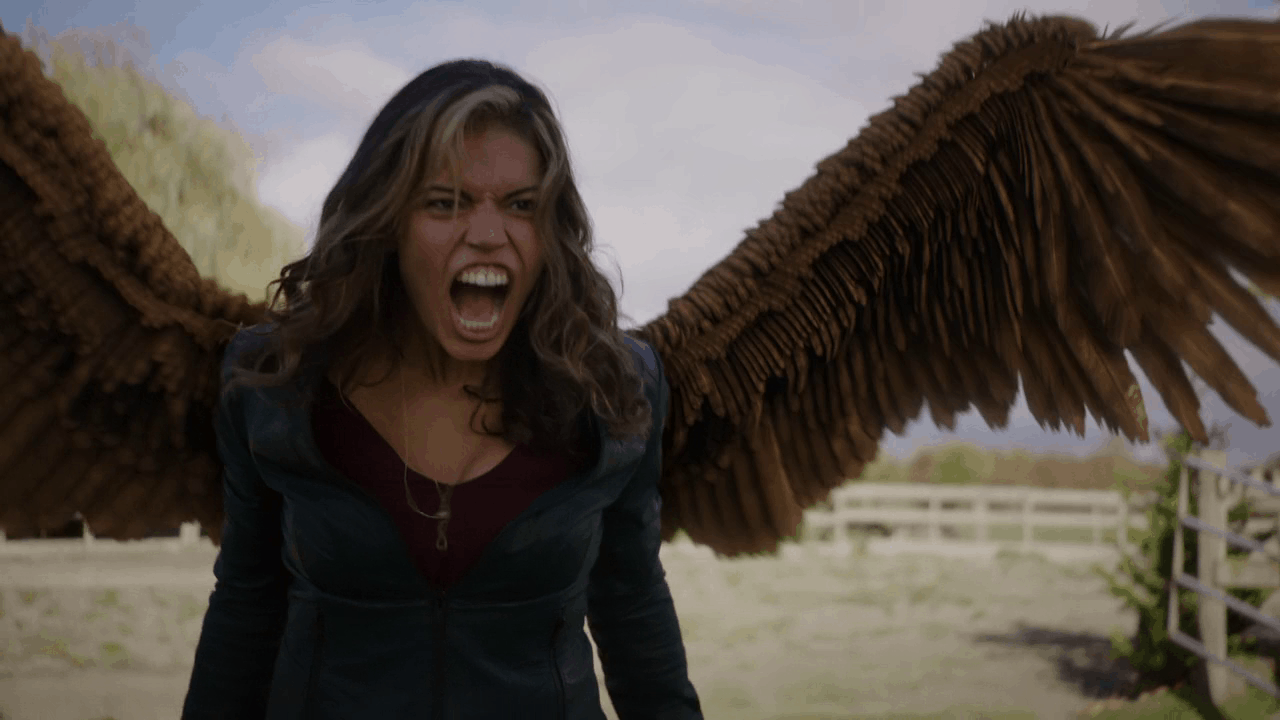 Saddled with many of the same problems as her male counterpart, Hawkgirl is actually the more successful of the two when it comes to multimedia adaptations, thanks to a long run as the (at times) token female on the 00s Justice League animated series. As a result, an entire generation of TV watchers are probably more familiar with Hawkgirl than Hawkman. But while that series went the “galactic space cop” route with the character, the Arrowverse is keeping the character firmly linked to Hawkman and the reincarnation angle, making this iteration of Hawkgirl have to work that much harder to set herself apart from her male counterpart. 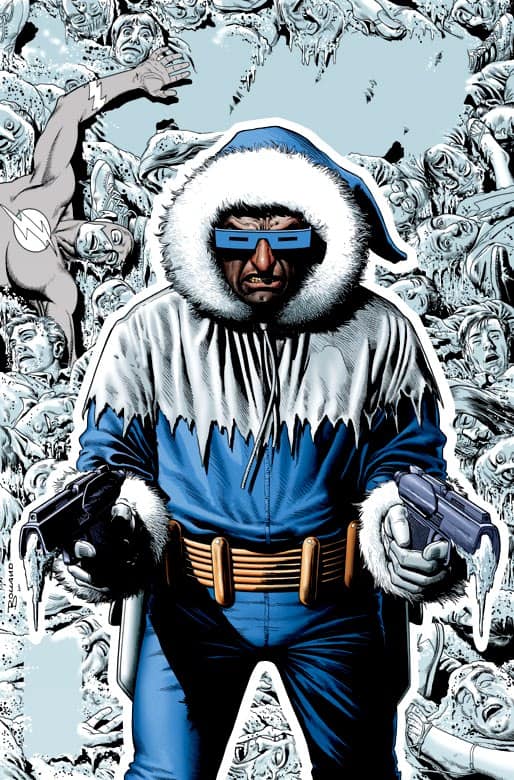 Captain Cold
aka Leonard Snart
First Appearance: Showcase #8 (1957)
You Might Remember Him From: Super Friends

Thanks to his inclusion in Super Friends as Flash’s Legion of Doom opposite (alongside Gorilla Grodd), many fans of a certain age consider Captain Cold to be Flash’s preeminent villain. Initially little more than a gimmick character with a freeze gun, under the guidance of writer Geoff Johns (whose work on the Flash comics heavily inspired the TV show), Cold developed into something unique among the villains of Flash’s Rogues Gallery, a blue-collar type of criminal with a unique code of ethics that occasionally allowed him to stand side-by-side with Flash. That said, his inclusion in the roster of Legends as one of the ostensible heroes had many long-time fans scratching their heads, even as the Flash TV show worked to establish Cold’s singular ethics and relationship with the title character (to varying degrees of success). As a result, it seems likely that one of Legends‘ first orders of business will be justifying the ongoing presence of this Rogue. 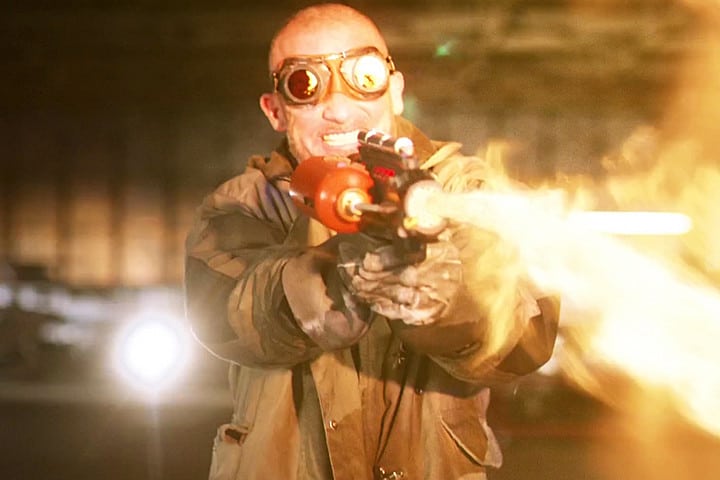 aka Mick Rory
First Appearance: Flash #140 (1963)
You Might Remember Him From: Flash comics

Another seemingly-odd inclusion in the Legends roster, Heat Wave was introduced as a counterpoint to Captain Cold, a criminal with a fear of cold and the opposite gimmick (a fancy flamethrower), and though the two started out as rivals, they eventually became frequent partners (more opposites attract!). Like several of the Flash’s comic book Rogues, Heat Wave spent some time as a reformed villain, before falling back into his villainous ways. But unlike the TV version of Captain Cold (which has displayed some inklings of his personal ethical code), Heat Wave has yet to display much in the way of redeeming characteristics, making him perhaps the wildest card amongst the Legends cast. 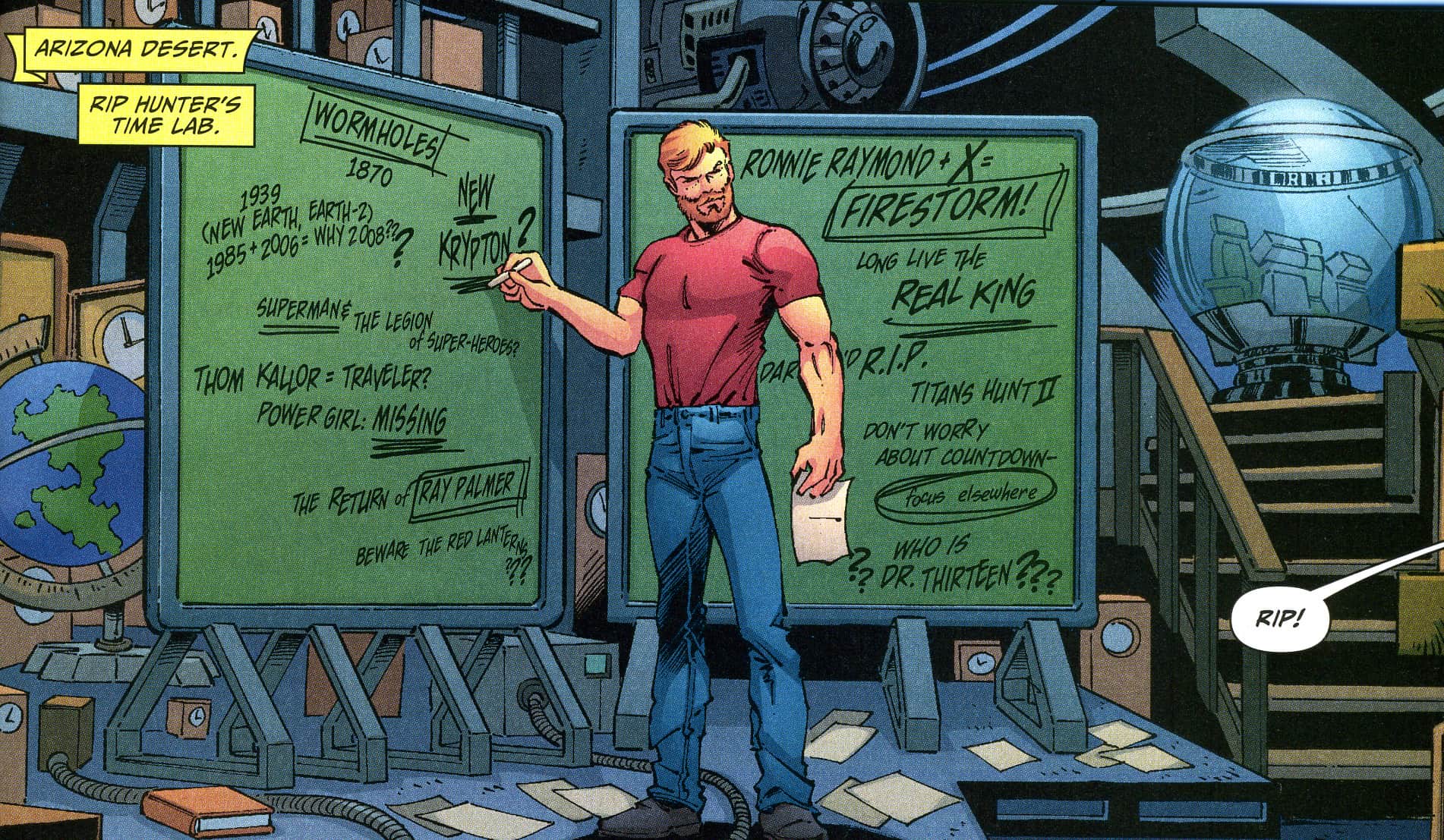 Created as a science-based hero in the wake of the Challengers of the Unknown‘s success, Rip Hunter was a scientist who created a time machine that enabled him to have adventures all across time. Following his initial 60s-era heyday, Rip existed for many years as little more than a footnote in the history of the DC universe, a character known best by long-time and hardcore fans. But as DC embraced its proclivity for universe-shaking and continuity-reshaping events in the 2000s, Rip was plucked from obscurity to serve as a kind of shepherd for many of these crises, doing his best to fix or protect the time stream, a role picked up on by Legends of Tomorrow, where Rip serves as the driving force behind the gathering of the titular legends in order to protect the timestream. 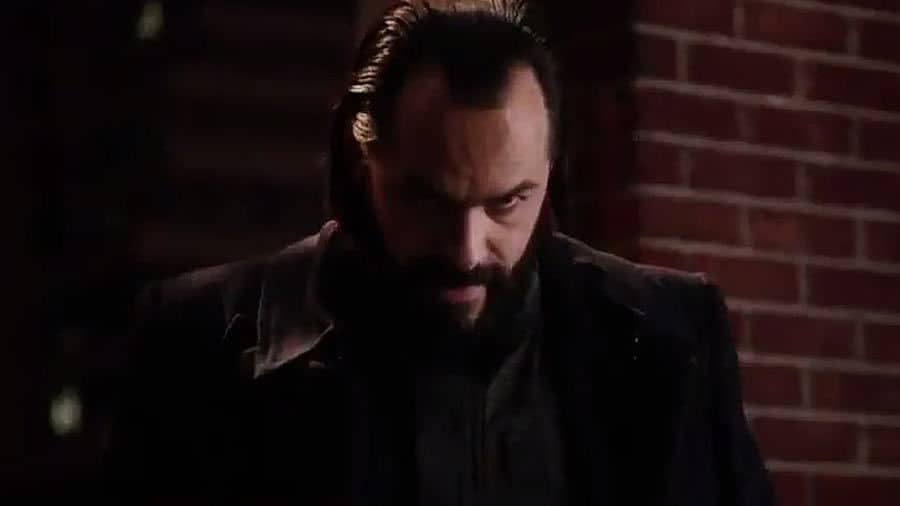 Vandal Savage
First Appearance: Green Lantern #10 (1944)
You Might Remember Him From: the animated Justice League

Like many of the characters featured in Legends of Tomorrow, Vandal Savage is a character with a long comic book history (he originally debuted in 1944!) and an interesting hook (an immortal caveman with world-conquering ambitions) who has nevertheless failed to rise to the level, inside comics or out, of fellow villains like Lex Luthor or the Joker, and is without a significant story, consistent antagonist, or recurring role on which to build a character base. For all intents and purposes, Legends looks to be that role, position Savage as the Big Bad of the series (after an ominous introductory appearance in the most recent Arrow/Flash crossover event). Appropriate, then, that a group of relatively under-the-radar heroes would face off against a villain with similar circumstances.