One of the largest and most influential film festivals of its kind in the world will be celebrating its 15th anniversary with three thrilling weeks showcasing international genre cinema, from July 14th to 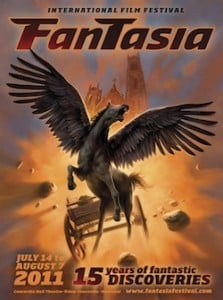 August 7th, 2011. The full line-up of over 120 feature films from across the world will be announced in another few weeks but Twitch released a press release from the festival detailing some exciting news. The festival has added a program Maple Syrup Thrills, a tribute to John Dunning and André Link responsible for such genre film landmarks as David Cronenbergs early break through hits Shivers, Rabid, as well as Happy Birthday To Me, Death Weekend and My Bloody Valentine.

Fantasia will award the trailblazing duo with a pair of Lifetime Achievement Awards and will also mount a special Dunning/Link retrospective series in order to allow a new generation of film lovers a chance to see some of Canada’s most outlandish genre productions of yesterday resurrected on the big screen, in many cases with their makers or stars on hand to introduce the screening.

Fantasia also announced a gala World Premiere for the horror anthology The Theatre Bizarre, one of the most hotly anticipated genre films of 2011. Theatre showcases the combined talents of some of the world’s most exciting and iconoclastic fantastic film figures: Richard Stanley (Hardware, Dust Devil) Karim Hussain (Sub conscious Cruelty), Douglas Buck (Cutting Moments), and Buddy Giovinazzo (Life Is Hot In Cracktown).

The 15th edition of the Fantasia International Film Festival will take place in Montreal July 14th to August 7th, 2011. For more information about the event, please visit www.fantasiafestival.com

Also don’t forget to check out Spectacular Optical – a new webzine launched by the festival, that’ll keep you in the loop with all the news related to the festival and it’s events.