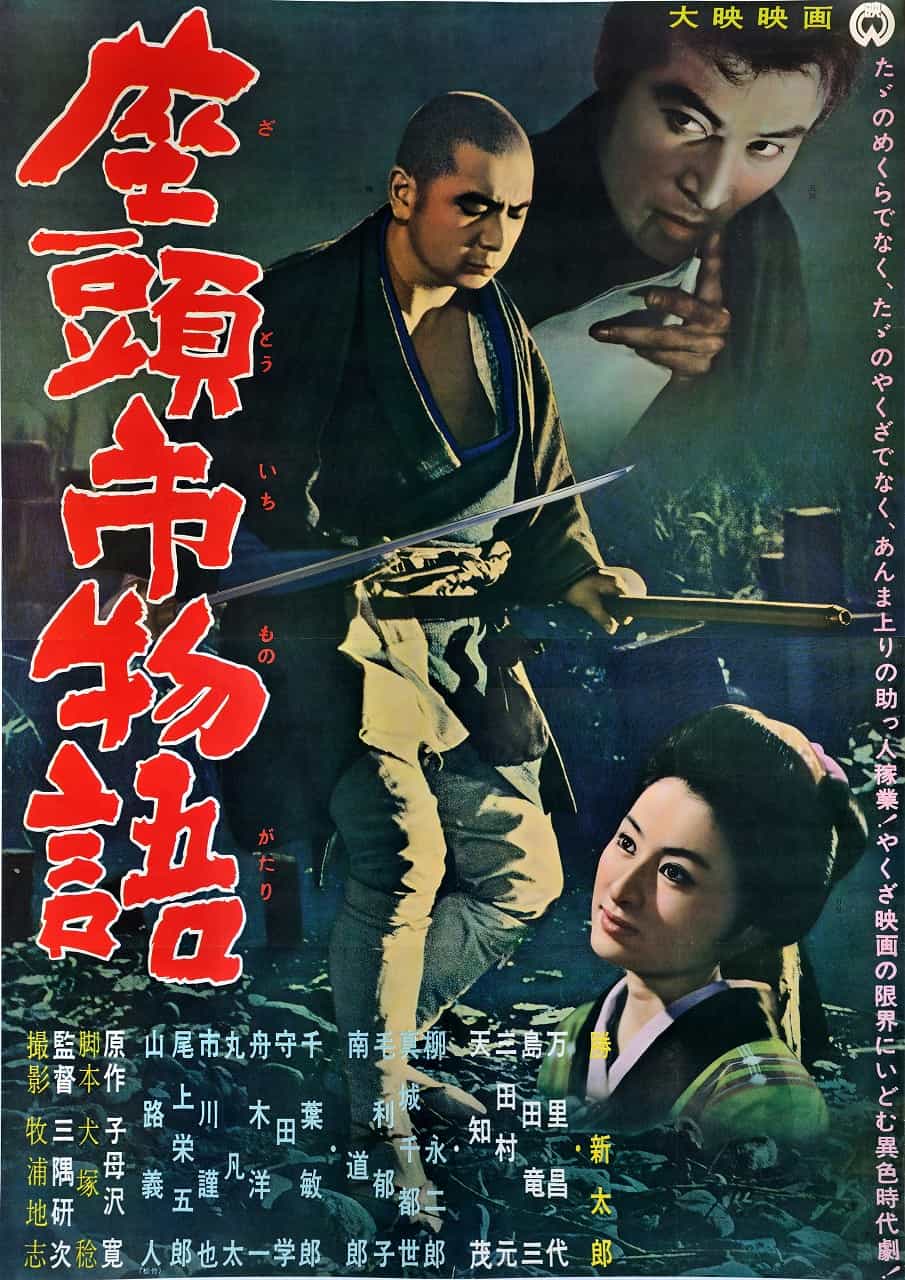 The Tale of Zatoichi

It is late Edo Japan. As the opening credits fade in and out on the screen, we see a blind man, Zatoichi (Shintarô Katsu) traverse the seemingly tranquil countryside. He walks at his own, deliberate pace, and at one point even strives to walk atop a log in order to get across a small stream. As he arrives at the inn of a man he has connections with, it becomes clear that there is more to Zatoichi than meets the eye, no pun intended. Not only is his hearing and sense of smell that much more attuned than that of regular people, he has honed his skills in the art of swordsmanship to the extent that he is poses as a legitimate threat to any and all that oppose him. Lest anyone worry, he is a rather humble man, not wanting to boast about his skills, other than the masseur services he has to offer. As is so often the case in such films, the small town Zatoichi is stationed in is crippled by the desires of two rival gangs, the one belonging to Sukegoro (Eijiro Yanagi), and the one led by Shigero (Ryûozô Shimada), the Sasagawa Yakuza. Both are preparing for war, and while Sukegoro believes to have the upper hand in hiring Zatoichi, Shigero has bought an expert swordsman as well: ronin Miki Hirate (Shigeru Amachi), a wandering gun for hire just like the protagonist. Rather than become mortal enemies, the two strike a friendship of sorts, making the looming battle all the more painful to bear…

The name Zatoichi stirs many emotions for fans of the series. He is, in some respects, the James Bond of Japan. Less of a womanizer than 007, he nevertheless is a frightfully skilled, cunning, intelligent and charming individual that ventures on a series of self-ordained missions in which villains must be vanquished. Unlike with the James Bond series however, the same actor for the 25-film series that lasted from 1962 to 1973 played the character of Zatoichi. Shintaro Katsu, who was recently seen in a film under review for the present column, Samurai Vendetta, was the only man to portray the legendary blind swordsman for 11 years. More impressive than the 11-year span is the fact that Daei studio cranked out 25 of them during that time. Talk about commitment from the franchise’s star!

The original film sets the stage for the series, with a relatively modest tale of the protagonist trotting into a town bereft of civility. The men are pigs, in particular the young thug Tatekichi (Michirô Minami) tasked by Sukegoro to ostensibly be Zatoichi’s man servant for the duration of his stay at the inn. The film discloses that Tatekichi has gotten a young girl pregnant but wants no part in patriarchal responsibilities, which earns him the scorn of the lovely Otane (Masayo Banri), Tate’s sister, who is dealing with a sticky situation of her own that involves another Yakuza gangster. The story of a lone hero cleaning up corruption and villainy in a small town is new to no one familiar with the history of action films, in particular westerns and chambara. 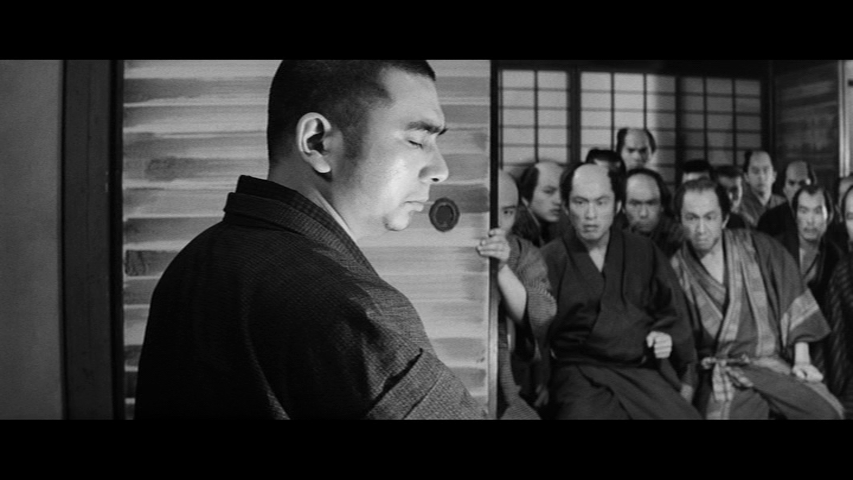 In the case of The Tatle of Zatoichi, director Kenji Misumi weaves a story with more heart than one might expect from a movie that follows a similar plot to A Fistful of Dollars and Yojimbo. A trio of characters, the titular swordsman, the young, desperate Otani, and Hitari are all confronted by emotions that run deeper than any of the lust for power expressed by the rivaling Yakuza men. In the case of Otani, she sees Zatoichi has a force for good, someone unlike anyone else in town, therefore quickly takes a liking to him. Granted, it is only fair to admit that actress Masayo Banri is predominantly playing the part of a damsel in distress, yet the earnestness of the performance sells it beautifully. Hitari is a wandering ronin, much like Zatoichi, only he is a younger man, gifted with a youthful body and good looks. Those are but surface level qualities however. On the inside, he suffers from a fatal illness (aided in no small part by his heavy drinking), and as such views a potential tête-à-tête with Zatoichi as a way out from his physical ailments and emotional doldrums. Rather than play the part with anger and bitterness, Shigeru Amachi brings a level of serenity to the role as someone who welcomes the presence of a man like Zatoichi. He respects him, going so far as to show tiny signals of friendship, signals the protagonist reciprocates.

Finally, there is Zatoichi, the man at the center of everyone’s attention. He is a complicated construction insofar as his ultimate goal as well as his proclivities are never made entirely clear. He never hides the fact that he is, in a nutshell, a gangster, yet refuses to show off his skills or threaten people with the tip of his sword for the sake of immediate gain. He is very much alone in the world yet refuses Otani’s advances. He appreciates Hitari’s company, even feels inner pain upon learning of his poisoning in the latter stages, yet still comes to realize, and accept, that their ultimate end game is a one-on-one fight to the death. He is a charming, sharp-minded man but never beats around the bush, always getting straight to the point. Thank goodness director Misumi and the producers hired an actor of Sintaro Katsu’s calibre to portray the role. Katsu deftly plays these varying personalities traits, infusing the anti-hero with compassion, dedication, honour, bravery, but also, when required, unapologetic severity and sternness. 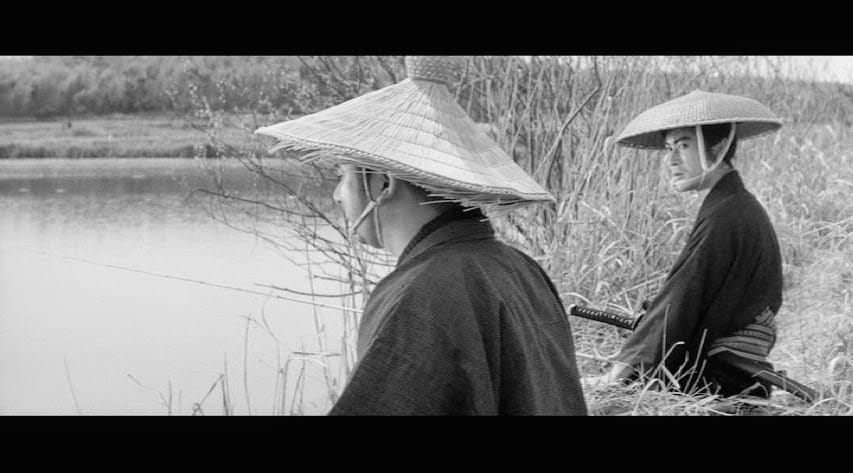 Many of the samurai escapades of the era made by the widely recognized maestros of Japanese cinema, like Yojimbo (Akira Kurosawa) and Samurai Rebellion (Masaki Kobayashi) never delved into the emotionality the same ways as does The Tale of Zatoichi. The latter feels as though it wants to tell a very bittersweet yarn through the prism of an action movie. Yojimbo is a film that wants to have plenty of fun with superbly sneaky and charming characters and Samurai Rebellion is austere as it explores grand philosophical themes. Zatoichi wears its emotions a bit more on its sleeves, thus helping it stand apart from its samurai brethren.

In what is becoming something of a trend with the 1960s chambara, most of the action is saved for the final act. In this regard Misumi’s film also does enough to distinguish it from many movies released that decade by setting the concluding battle between two warring factions in an urban environment. Warriors caught in traps in narrow alleyways, skirmishes between handfuls of excitable swordsman, people running in, out and around buildings, the action is frenetic and carries the weight of an actual war waging about. This urban landscape provides a vaster scope with more surprises than what is regularly seen in samurai films. The edits and camera pans also do their part in bringing the tension of the encounter to life, with reveals of characters hiding behind buildings, others peaking out of windows as their soon-to-be-dead foes approach from afar. It all looks very, very cool and serves as an appropriately violent finish to a movie that promised a ruthless bloodbath from the start.

By the film’s end, there is little wonder that Daei wanted to beat the iron while it was hot and make more Zatoichi films. The original movie is highly engaging for its worthwhile cast and just as entertaining for the vast array of personalities that populate this universe. To cap it off, when the action erupts, it pays off for the patience asked of the viewers, not to mention that Zatoichi himself successfully comes across as a absolute death machine when prompted to. For those that fancy a good samurai film but want to avoid the more austere efforts of say, Masaki Kobayashi, The Tale of Zatoichi is basically as good as it gets. Anyone can see it.