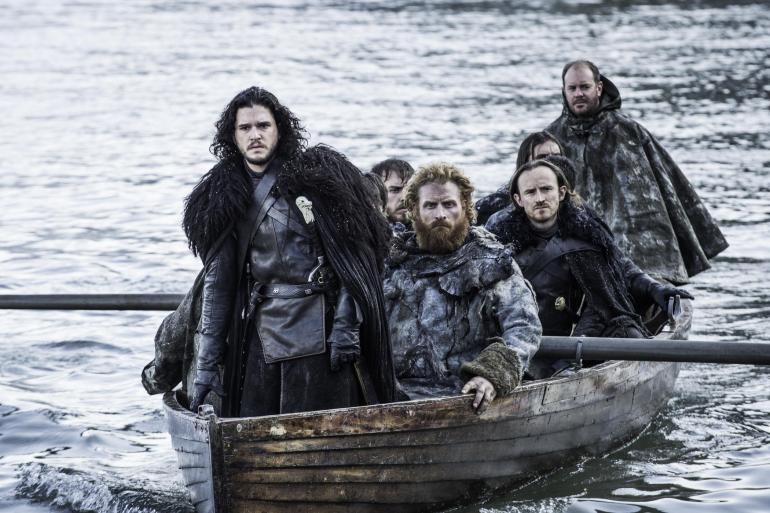 “The Gift,” spent plenty of time setting up several major storylines; Cersei was imprisoned for her sins against the church, Stannis was gearing up for battle, Samwell Tarly had to deal with the death of Maester Aemon, Jorah helped Tyrion finally meet Daenerys face-to-face, Sansa tried to escape Ramsay’s grasp and Jon Snow and Tormund headed north. Last week on our Game of Thrones podcast, I discussed why I enjoyed “The Gift” so much, and it all came down to balance. The best episodes of Game of Thrones give viewers a bit of everything they’ve come to love about the show: betrayal, family values, justice, judgement, principles, politics, love, death and a some well choreographed fight scenes. This week we get all that, and then some.

So, we knew Snow and Tormund were heading to the Wildling outpost but I had no clue just how much work they had cut out for them in trying to convince the Free Folk to abandon the establishment and go to Castle Black for safety. Pitting a small group of the Night’s Watch and the Wildling army against a battalion of undead, unpleasant and unstoppable soldiers, might just be the most confidently paced battle the series has offered us yet; an assault striking an ideal balance of combat and camaraderie, heroism and sheer terror. It doesn’t hurt to throw in a giant, some White Walkers, hundreds of undead and Jon Snow wielding Valyrian steel either. 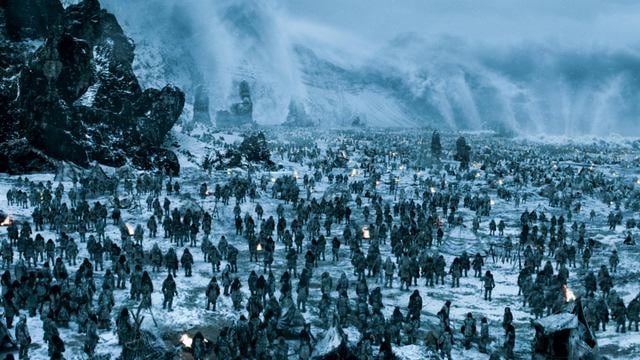 For five years, viewers have been reminded that winter is coming, and while we’ve already seen brief glimpses of white walkers and the undead army, these scenes were few and far between. Tonight David Benioff, D. B. Weiss and director Miguel Sapochnik showed us more than just a glimpse of what’s to come, and it all centers around Jon Snow! “We’re not friends. We’ve never been friends. We won’t become friends today,” Jon Snow tells the Wildlings at Hardhome. “This isn’t about friendship. This is about survival. This is about putting a 700 foot wall between you and what’s out there.” Jon sees the bigger picture, and it doesn’t involve the Iron Throne. “I’m not asking you to forget your dead. I’ll never forget mine. But I’m asking you to think of your children now. They’ll never have children of their own if we don’t band together now.” As we all know, the motto of House Stark is “Winter is Coming.” The motto reminds the people of Winterfell to prepare for the worst, to always be on-guard, and to be vigilant. As lords of the north, the Starks must remember they will be hit first, and hit hardest. Their responsibility to protect their people in these long winters is essential for their survival. Jon is a Stark, and perhaps that is why he’s been a step ahead of everyone else, always thinking about the bigger picture, or rather, the true danger that lies ahead. His words are a grand meditation on the futility of war. Echoing his father Ned, Jon continues to remind us that yes, “Winter is Coming.” The White Walkers, are more than just a tribe of snow zombies. Resembling the four horseman of the apocalypse, the White Walkers are a metaphorical manifestation of death. They are the Grim Reapers of the cold long winter. And so, Jon’s words carry a double meaning. They’ll never forget their dead because their dead are coming back to life and haunting them.

Back in season one, Old Nan tells Bram the story:

“What do you know about fear? Fear is for the winter when the snow falls a hundred feet deep? Fear is for the long nights when the sun hides for years, and children are born and live and die, all in darkness. That is the time for fear, my little lord; when the white walkers move through the woods.” 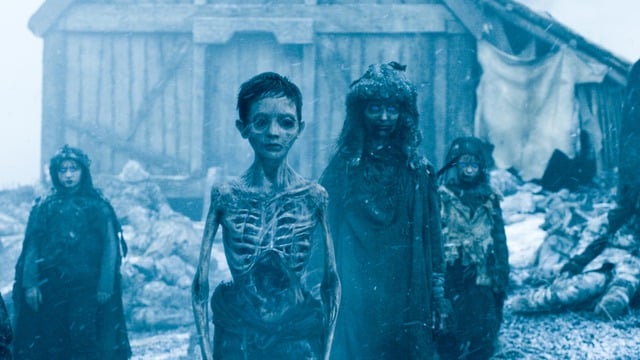 As Jon tries to convince the Wildlings that it is in everyone’s best interest to build an alliance, Sam is making a similar argument to Olly (Brenock O’Connor) back at the Wall. “Sometimes, a man has to make hard choices, choices that look wrong to others, but that he knows are right,” Sam tells his young Brother, trying to reassure Olly that Jon is making the right call. It’s easy to understand why the young boy is confused and why he carries so much hatred. Olly is the lone survivor of a terrible siege, and he reiterates the story of his family’s slaughter to Sam, informing us of something we didn’t know. Tormund Giantsbane (Kristofer Hivju), was responsible for leading the raid that killed Olly’s entire family and community.

After quite a lot of build-up, “Hardhome” brings an extended battle at the seaside settlement of Hardhome from whence the episode gets its title. How well directed was this 15-minute sequence? At first we hear dogs barking, and we know something is wrong. Then, we see the cold air and snow rise in the distance. The Thenn leader calls for the gates to be closed but it is little too late. The Wildlings left outside are already marked for death. Cudos to Miguel Sapochnik for holding his shots long, and dropping the musical score, not once but twice; first before the terrible attack and again, before the credits role. There’s just so much to digest in the last fifteen minutes, and it was all so beautifully staged. When the camera pans back to show the thousands and thousands of wights rushing Hardhome, and the White Walkers on horseback on the mountainside, I nearly lost my breath. Jon racing after the obsidian (dragon glass) was electrifying. When the White Walker appears before him and kills the Thenn, I honestly thought Jon might not survive. Watching Jon reach for the Old Bear’s Longclaw had me gripping to my seat. When the White Walker’s blade comes into contact with Longclaw, I gasped when his sword doesn’t break. Then Jon Snow shatters him in a single blow and the internet exploded. 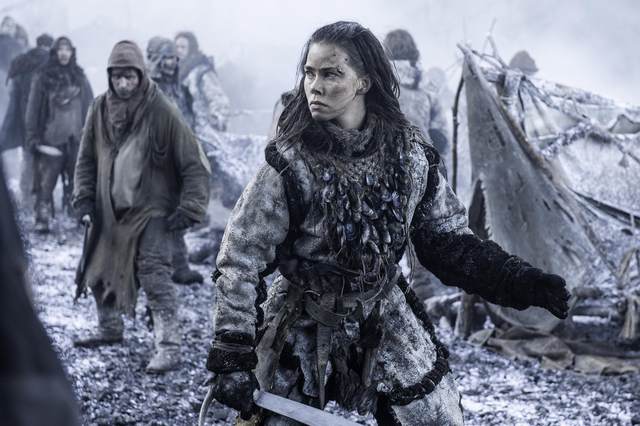 The giant fleeing from battle while single-handily destroying the dozens of walkers that jump on his back was a sweet touch, and the moment when the dead children come back to life (so to speak) and charge at Karsi (Birgitte Hjort Sørensen) was truly terrifying. And the shots of the White Walkers watching from the top of the cliff gave me the chills. But that stare down at the end between Jon and the Night’s King was the money shot. It takes a lot of talent to pull off such an ambitious action set-piece and have viewers experience a wave of emotions in such a short span of time. But what makes the battle so effective is how the attack on Hardhome feels like the start of a much larger battle – a war that will bring every character in the series to the same battleground. After centuries of bickering and rivalry between these houses, they may have no choice but to finally put their differences aside.

No time to focus on the other four storylines this week, but don’t forget to listen to our Game of Thrones podcast, for more thoughts on this episode and the season as a whole. 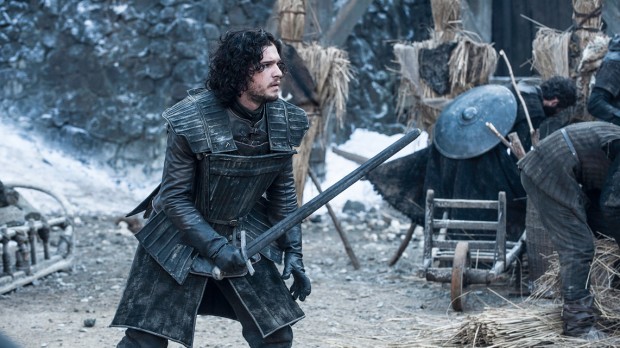 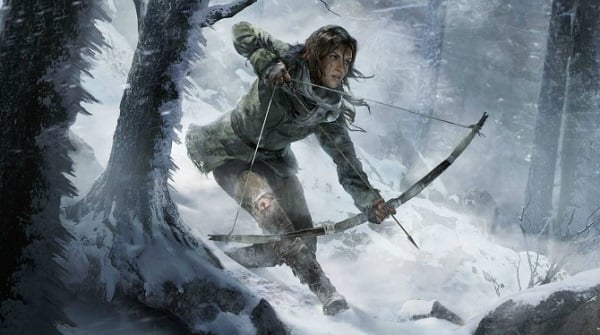 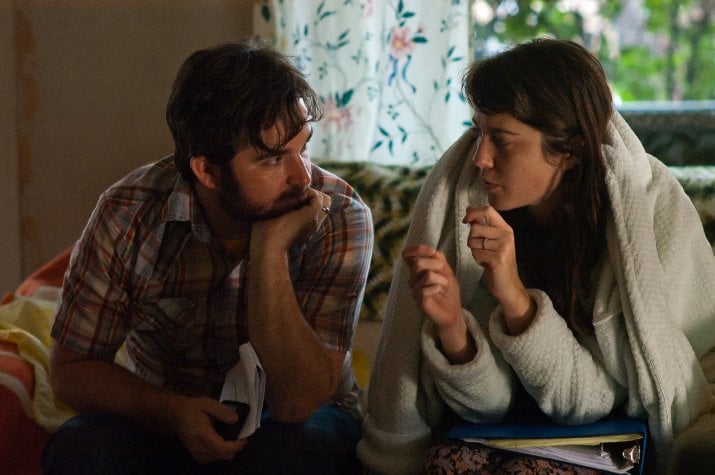