Our column “Hidden Gems” is dedicated to those great films that many people have overlooked and or have found trouble finding distribution across the globe. 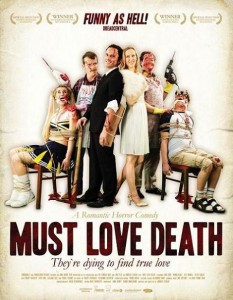 Offhand, it’s difficult to think of another film that features both a “meet cute” and a nail gun, but in his first feature, Andreas Schaap manages to unite the two. Must Love Death, for better or worse, belongs to a genre of one: the torture porn romantic comedy. It also serves as an outsider’s view of American pop culture, being as it is directed and written by a German (with a mostly-German cast and crew) – it’s the surrealist Dancer in the Dark, if you will. (To be fair, though, Schaap doesn’t seem to share Von Trier’s deathly fear of flight, as most of the film was actually shot in New York.)

After a raunchy opening scene lets us know we’re in for a bumpy ride, the film’s first 45 minutes alternate between the most banal romcom imaginable – a sadsack musician, Norman (Sami Loris), falls for an obnoxious actor’s girlfriend (Marion Kahle) after she hits him with is car – and flashforwards in which Loris meets up with a group of supposedly likeminded folks to stage a group suicide in a remote cabin in New Jersey. If you’re expecting complete tonal discord, you might be surprised at how Schaap treats wildly divergent material with the same aesthetic – scenes of doggedly conventional courtship sit immediately next to interminable scenes of gory torture, but are treated as having been cut from the same cloth. Perhaps that’s attributable to Schaap’s go-for-broke approach to taking on American pop – country music, gangsta rap, reality television, and celebrity culture are all present for a skewering, in a manner no more subtle than you’d expect from a filmmaker who throws in scene transitions such as blood dripping from an impaled foot becoming raspberry sauce topping off a sundae. Like most genre directors, Schaap has a tricky time with interpersonal drama, and it’s hard not to notice that he pulls off the gory bits with considerably more panache than his “romantic” material. As a result, the more the violence escalates, the more paradoxically grounded his film feels, so that as the body count rises, so does the film’s credibility. Death is precisely as disjointed as you’d expect, but it’s hard to deny it possesses a certain charm – its cultural critique may be broad and obvious, but it never feels smug or without justification. If nothing else, its scenes of romantic preening and sadistic torture provide an invaluable reference point for any filmgoer who’s ever been forced to sit through the likes of New In Town.