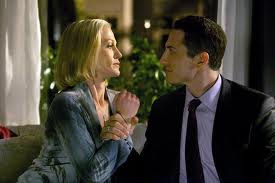 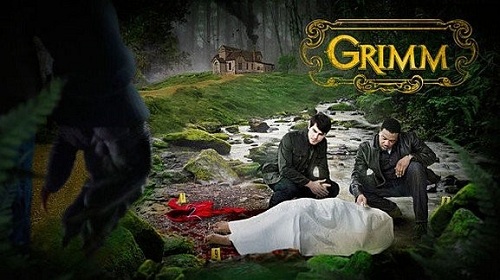 When Nick and Juliette meet Hank’s new girl, Nick discovers that his partner is in love with a Hexenbeist.

Finally, this week, we get to see David Giuntoli kiss someone. Granted it’s Adalind Schade on the other side of the lip action, and Nick Burkhardt is smooching a Hexebeist in the line of duty, but I’m betting I’m not the only lady in the Grimm audience who took a close interest in the screen at that point in the show.

Nick isn’t the only character getting some action this episode. Captain Renard has already resisted the advances of Adalind, who flung herself at him last week, pretty fangs bared. This time he has a tougher test when Adalind’s mother, also a Hexenbeist, but one we imagine must have special attractions given her magic mirror, runs her hand up his superbly tailored thigh. But Renard manages to keep his passions in check, much to my disappointment. I’m not sure exactly who the special girl is that will eventually catch Renard’s eye, although the writers could make the story very interesting by making that person Juliette for example, or even Monroe’s love interest Rosalie. When Renard falls, it will be hard and hopefully in full close up. 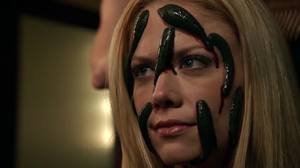 You’ll remember that last week I complained about having yet another new set of Wesens as the focus of the story. Well, the writers must have been listening (because they listen to every word I say, of course), because this time the story finally shifts from “Wesen of the Week” to concentrating on Renard’s plan to force Nick to hand over a precious key. The plan involves Adalind placing an enchantment on Nick’s partner Hank so he’ll fall in love with her, although as sex happens to be the end game in this particular spell, you did have to wonder why Adalind bothers with the enchantment in the first place. Despite his scruples about taking advantage of a witness, Hank, as played by Russell Hornsby, wouldn’t have needed much encouragement to jump in the sack with Adalind. Couple of drinks, jazz on the stereo – I’m guessing Hank would have put his morals on hold if Adalind had run her leg up his thigh. 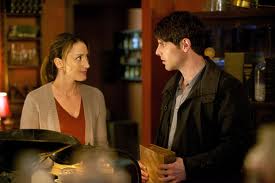 But the spell is a necessary plot device, allowing Sergeant Wu to develop a raging case of pica after eating one of Adalind’s enchanted cookies, which leads to some amusing scenes of Wu chomping down on his shag pile carpet. And Wu’s predicament not only gives Nick the clue he needs to work out what Adalind is up to, but also involves Monroe and Rosalie in finding a cure. Team Grimm is now up and running – a situation which saves Nick from visiting his Aunt’s trailer every episode and also from getting Monroe up in the middle of the night with questions about exactly what kind of Wesen enjoys eating live frogs. And as the show ends with Hank waking up in Adalind’s (suspiciously unruffled) bed to find Monroe and Rosalie watching over him, it can’t be long before Nick has to explain what’s going on to his partner. But with the finale now just around the corner, I reckon we’ll be back to Wesen-of-the-Week for now, with further revelations saved for the season’s end.