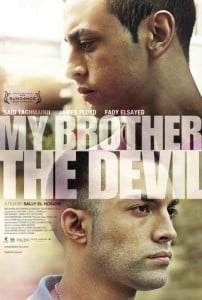 My Brother the Devil

Although from East London, fourteen-year-old Mo (Fady Elsayed) and his older brother Rashid (James Floyd) speak an entirely different language. On the treacherous streets of Hackney, England, gang members are endeared with familial names, with people often calling each other ‘fam’ or ‘cuz’. So in Sally El Hosaini’s My Brother the Devil, what does the titles really suggest?

Born in an Egyptian household, Mo and his brother have grown up on an impoverished council estate. Rashid scrapes a living as a member of a local gang, selling drugs and other miscellaneous illegalities, but doesn’t want Mo to follow in his footsteps, whom focuses more on his music and academics.

But when a rival gang leader named Demon (Leemore Marrett Jr.) oversteps his boundaries and intrudes upon Rashid’s, an ensuing gang war leads to events and situations with far-reaching and unexpected ramifications. From the multifaceted title, the etymology can be ambiguous. On the surface, the brother is question is Rashid, whose life of crime and sin has made him ‘the devil’, whom eventually leads Mo astray.

However, ‘my brother’ also has a colloquial meaning in the film’s context, because in Hackney lexicon, ‘brother’ can refer to fellow gang members whom have also misled Mo.

And thirdly, ‘the devil’ can be in reference to the Demon character, in which case, the title is trying to convey the solidarity of Demon and Rashid’s gangs as brothers, and their collective and universal struggle against the fundamentally unjust system that they were born into. The film itself is every bit as layered and nuanced as the title and, as the narrative unfolds, the story takes unexpected twists and turns that take you through a roller coaster of emotions. Essentially, the film is a remarkable mixture of The Kid With A Bike and Attack the Block (minus the aliens).

Visceral, poignant and brutally honest, My Brother the Devil exhibits a truly rich and authentic look at inner city turmoil. With a breathtakingly gritty aesthetic, appositely restrained acting, and intensely personal cinematography, the film brings the viewer into a world full of unrelenting tension, struggle, and desperation.