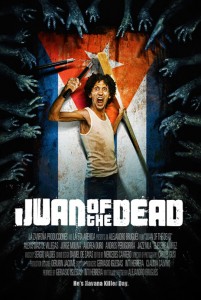 Juan of the Dead

The only thing more recycled than zombie films are the zombies themselves. It takes a special talent to reinvigorate the genre of the undead, and when Edgar Wright made Shaun of the Dead, it seemed like he finally created the be all and end all.

However, the zombie flick is uncharted territory for a country like Cuba, so when writer and director Alejandro Brugués decided to have go with Juan of the Dead, fanboys across the world waited with bated breath. Unfortunately, all that forlorn hope is in vain, because Juan of the Dead, as the title portends, offers a strictly superficial change from the genre norm.

In Havana, 40-year old Juan (Alexis Díaz de Villegas) saunters through life at a lackadaisical pace with his best friend, the ribald Lazaro (Jorge Molina), and Lazaro’s son, the glitzy Vladi California (Andros Perugorría). Aside from his tumultuous relationship with his daughter Camila, (Andrea Duro), Juan’s life is a doddle.

Things start to change, however, when people start attacking each other. Initially blamed on US dissidents and agitators by the local media, Juan quickly discerns the gravity of the situation; it’s a zombie epidemic.

Rather than trying to flee, Juan and his group create an impromptu extermination business, getting rid of zombies and the infected for demanding patrons – for a price, of course. But as the swarm escalates with unexpected ferocity, Juan is forced to take extreme measures that ultimately cause him to reflect on his family, himself, and his country.

The most disheartening thing about Juan of the Dead is that it’s uninspired. While it’s perfectly fine to pay homage to zombie films of the past, there has to be more than just a tokenistic attempt at providing something new or different. But as it is, the story is too generic, the characters too stock, the humour too broad, the deaths too unimaginative (if you’ve seen the aforementioned Shaun of the Dead, than you’ve already seen the best Juan of the Dead has to offer in this regard), and the film’s singular original conceit (getting paid to kill zombies) is abandoned far too quickly.

Additional characters are peppered into the film’s narrative as it goes along, but almost all of them are introduced for the sole purpose of being killed. They don’t contribute very much to either character or narrative development, and although one can argue that this lends to the unexpected and capricious nature of the situation, the reality is that it makes the film, and its characters, feel lazy and arbitrary.

But worst of all, the film is a tragic victim of its own dire circumstances – financially, to be specific. It’s clear from the often-shoddy production value and computer effects that Juan of the Dead faced budgetary constraints, but this ends up hurting the overall experience of the film.

For example, there is one scene where Juan and his crew are slowly surrounded in a room by a bunch of Spaniards-turned-zombies. In one of the film’s few moments of genuine anticipation, we gleefully expect some sort of bloodbath. But for whatever reason, the lights suddenly go out, and the film’s more promising scene up to that point is content with resolving the conflict in the dark.

Not only does this rob us of the gore and blood that was promised to us by the films set-up, it adds an air of humbuggery that shouldn’t be so jarring in a self-professed satire. This sort of anticlimactic letdown is an epidemic in Juan of the Dead, occurring more than once, and most frustratingly, in its ending.

The only discrepancy of note is the film’s setting: Cuba. Filmed in the rundown, dilapidated infrastructure of the country, this immediately sets an appropriate atmosphere and tone to the film, which, unfortunately, it never truly lives up to. But aside from that, the filming location also lends itself to a fairly intriguing political commentary. Using colloquial phrases about the Cuban revolution, billboards, allusions to political leaders, and sarcastic jabs at the US, the film has a political mind that’s uncommonly sharp.

But despite all that, Juan of the Dead exists in a cultural conundrum. For Cuban audiences, this genre of filmmaking is so virgin that it’s entirely conceivable for the political satire to go unnoticed under the sheer hitherto unknown entertainment value of the film.

But for those of us whom are more acquainted to the genre, Juan of the Dead is nothing new, aside from the its commentary about Cuba, but even then, it’s more effective when understood by someone already ingratiated in the culture.

For more info and tickets, please visit the website for Toronto After Dark