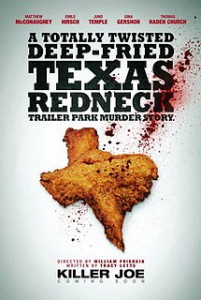 Nudity doesn’t often serve as a statement of purpose for an American filmmaker, but Killer Joe delights in going against the grain. In the first scene, one of the lead characters opens the door to her trailer, naked from the waist down. In the context of the story, this brazen action tells us a lot about the setting and character, but for director William Friedkin, it’s a way of warning us, “Strap in. You’re in for a hell of a ride.” Working from a script by Tracy Letts (who adapted his 1993 play), Friedkin hasn’t lost his touch despite being an elder statesman of American cinema. Killer Joe is an intense, disturbing, and hellish Southern gothic neo-noir.

Chris (Emile Hirsch) is a drug dealer who needs $6,000 fast, or else he’ll be killed by a menacing group of mobsters. At his wit’s end, he and his dim-bulb father Ansel (Thomas Haden Church) agree to kill Chris’s mother and Ansel’s ex-wife, whose $50,000 insurance policy would solve their cash problems. To make things more convoluted, they hire a contract killer and Dallas cop named Joe to do the dirty work. Though Joe typically is paid in advance for his services, he agrees to take on Chris’s attractive but emotionally stunted sister Dottie (Juno Temple) as retainer before the insurance policy cashes in. Unsurprisingly, things get out of hand, quickly and violently so.

The most revelatory aspect of Killer Joe is the actor playing its title character, Matthew McConaughey. Along with his sinister supporting turn in Magic Mike, McConaughey’s having a banner year. We can only hope he won’t revert to his good-ol’-boy romantic-comedy roles if the risks he’s taking don’t pay off in the way he wanted. Here, McConaughey uses his built-in charisma to convey seductive menace, bringing to mind the Robert Mitchum character in The Night of the Hunter. Joe is a fierce customer, someone who makes plainly clear to Chris and Ansel that he isn’t to be trifled with. We know the father-and-son duo will run afoul of him at some point; otherwise, where’s the conflict? But once Joe gets mad, it’s both electrifying and frightening to behold. Of course, most people who are aware of Killer Joe are fixated on its NC-17 rating, still a rare brand for a mainstream release. And make no mistake, Killer Joe is a very adult film, with sequences of graphic, disturbing violence and sexual situations. Whether what’s depicted on screen is more disgusting and gory than what’s in modern horror films, though, may depend on personal preference. Suffice to say, Letts’ imagination is perverse enough—and Friedkin has no intent to obscure the action, especially in the final third, which is the most intentionally stagey—that those sexual and violent scenes aren’t like anything you’ve seen before. For example, Gina Gershon, playing Ansel’s current wife, has a uniquely icky and likely iconic moment late in the film that may make you swear off fried chicken for good.

As much as people may be curious at the prurient nature of Killer Joe, it’s a legitimately suspenseful noir. Though all of the actors pull their weight admirably, McConaughey and Temple are the standouts. Temple—most recently seen in The Dark Knight Rises—has a tricky task, portraying a young woman of indeterminate age (you hope Dottie is at least 18 considering what happens in the film, but you’re never told explicitly) who’s psychologically a child. Dottie, like her brother, has led a sad and wasted life, but instantly finds a real if seriously demented connection with Joe. Their courtship scene—one of many extended but not overlong sequences—is magnetic and compelling; Temple and McConaughey have a twisted but believable chemistry. Seeing as Killer Joe was based on a play, the cast isn’t large outside of the main quintet. Hirsch, Haden Church, and Gershon do solid work in the film as purely despicable, selfish white-trash characters. Other actors could’ve easily turned these people into caricatures, but it never feels like they or Letts are mocking those who live in trailer parks as a whole. Yes, they like fried chicken and cheap beer, and laugh at monster-truck footage on TV, but Chris, Ansel, and Sharla feel like actual people. People you’d never want to meet, ever, but still people.

Leave your pretensions at the door—Killer Joe is a mad, lurid rush of unabashed and misplaced greed. As the story progresses, it feels more and more like a freaky fever dream, a waking nightmare. And William Friedkin still knows how to bring the same high level of intensity to 21st-century cinema that he did with The French Connection and The Exorcist. Killer Joe may not have the Devil inhabiting a little girl, but watching a devilish man seduce a mentally young girl is equally haunting. Anchored by a slimy and suavely evil performance from Matthew McConaughey, Killer Joe is, among other things, excellent proof that some directors don’t lose their edge as they age.