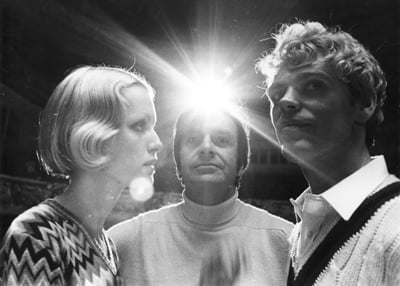 If you didn’t get enough of all the retrospective screenings of Ken Russell’s work taking place at la Cinémateque Québecoise and Fantasia this month, you might be interested in checking out a very rare cinemascope print of The Boyfriend. This is a very rare screening of a very unique musical. Packed with outrageous song and dance numbers, director Ken Russell’s hit film introduced the young model “Twiggy I” her first starring role.

The leading lady of a second rate British theatre troupe (an unbilled and amusingly vampy Glenda Jackson) breaks her ankle and is quickly replaced by the pretty assistant stage manger, Polly (Twiggy). Secretly in love with her co-star (Christopher Gable), Polly’s nervousness is compounded when the company learns that Hollywood director Cecil B. De Thrill is in the audience. His presence sets off a series of hilarious rivalries, on-stage and off. Based on Sandy Wilson’s 1920’s tongue-in-cheek musical, this Busby Berkeley spoof thrilled audiences with its charming star, extraordinary sets, sumptuous costumes and lavish musical routines.