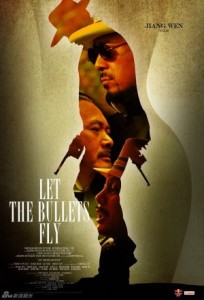 Written and Directed by Jiang Wen

American film buffs will be drawn to Jiang Wen’s 2010 hit Let the Bullets Fly, now receiving a limited U.S. release, because of the presence of Chow Yun-Fat. If they are expecting Hard-Boiled, or even a lesser-known Chow film such as Full Contact, they’re likely to be disappointed, but not through any fault of Jiang’s. He delivers exactly what he aims for: a vicious dark comedy which spares no moment to take a potshot at the Chinese government, its film conventions, and even its citizens.

Jiang plays “Pocky” Zhang Mazi, a bandit in the Chinese countryside during the 1920s. The last Emperor had abdicated and power was focused in the hands of local governors, who were as corrupt as corrupt got. After ambushing one such governor, Zhang decides to take his place with the idea of getting rich, but he quickly realizes that making money in such a position will not be easy because of the influence of a local crime lord (Chow). “This movie delivers laughs in bulk, but it has its share of dramatic scenes as well…

The two characters bounce off of each other again and again, with Chow in the role of clown and Jiang the straight man. Those who have only seen Chow in John Woo’s films should make every effort to see him in a comedy role; he has a perfect grasp of how broad he needs to be while still coming off as a credible villain. The answer to that question is “extremely broad,” because he serves as a symbol of basically everything in Chinese society that Jiang does not like.

That is the film’s weakness: its satire has too many targets. Zhang suffers a majorly traumatic event early in the movie, and the film just can’t maintain the tone set by that event all the way through, not when balanced against targets like corruption, repression, and the conventions of action-movie filmmaking. This movie delivers laughs in bulk, but it has its share of dramatic scenes as well and it’s not as easy to get on board with some of them.

Still, in its last scenes the film strikes a melancholy tone which has an unusual power. The final scene of Let the Bullets Fly is one of the best to be seen in a theater this year, perfectly depicting how the victories won by Jiang’s character, and Jiang himself (this was one of the biggest hits in the history of China), were wasted on the very people that he fought for.