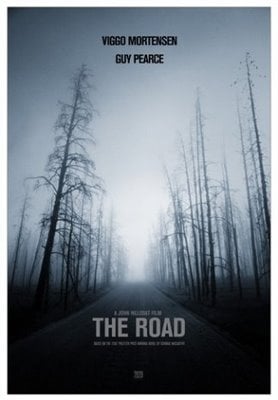 For fans of Cormac McCarthy’s Pulitzer Prize-winning The Road,  the novel’s journey from page to screen has been almost as harrowing as the one endured by the book’s protagonists. Delayed by over a year due to unspecified wrangling within the temple of Miramax, this grim, biblical parable is finally seeing the light of day at film festivals around the globe.

Given the book’s critical acclaim, its adoring fan base, and the cinematic scope of the 2007 novel, it came as no surprise when the film was optioned for a film adaptation. The news that it would be helmed by Australian director John Hillcoat was equally well-received, given the quality of his earlier work, in particular his Outback western The Proposition, which demonstrated Hillcoat’s aptitude for crafting an uncompromising vision of a disintegrating society buried within a violent landscape; themes echoed in McCarthy’s The Road. 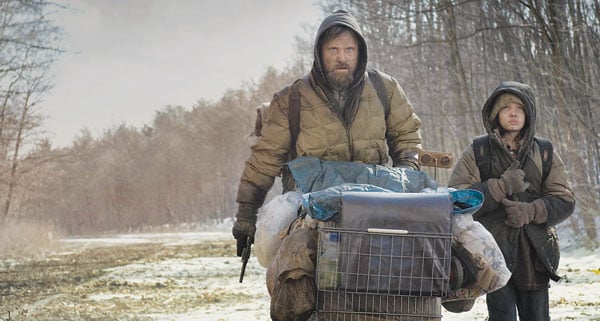 The Road unfolds in an America nearly destroyed by an unspecified cataclysmic event, perhaps an unholy conflagration fueled by nuclear war and environmental disaster. Society has retreated to Dark Age primitivism, where murder, rape and cannibalism run rampant among the survivors of the dust shrouded world. In this desolate moral and physical landscape, a man and a boy (Viggo Mortensen and relative newcomer Kodi Smit-McPhee) traverse the infernal, frigid America, heading for the coast in the forlorn hope that shelter, safety and food will be more plentiful by the ocean. The journey is interspersed with flashbacks, detailing a pre- and post- ‘event’ world with the man’s initially pregnant wife (Charlize Theron) becoming increasingly more frantic and hopeless once the boy has been born, self-destructively hating herself for bringing life into such a poisoned, cruel world. As the film develops, the emphasis shifts from the man’s past to his unyielding love for his son, a pale torch amidst the gloom. His remorseless drive to ensure his boy is protected remains untainted and somehow pure despite the darkness of the world around him, even through his insistence on explaining the swiftest method of suicide should they be captured by the terrifyingly sadistic cannibals that roam the desolate forests and cities. 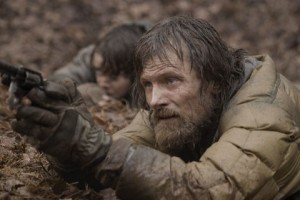 The film’s strengths are its visual palette, which ably portrays the sterile, blasted landscapes of the book, a grim portrayal created by location shooting around a post-Katrina New Orleans and various dour industrial and abandoned sites in Oregon and Pennsylvania. All the main beats of the novel are transposed intact; the horrifying basement larder, the meeting of the old man (portrayed by an almost unrecognizable Robert Duvall in the film’s best scene),  and the final conclusion all mirror the book’s narrative. Viggo is his usual adept, earthy, slightly sensitive persona, and his wife’s backstory – which gets a page at best in the novel – is handled effectively, expanded by screenwriter Joe Penhall just enough to strengthen the tale for a cinematic translation. And any UK viewers of a certain age who remember the post-attack phase of the cult BBC 1980’s seminal nuclear war drama Threads will recognize a very similar presentation of mankind in the midst of annihilation, choking out a few final pathetic gasps of life before all the achievements of civilization over the past thousands of years turn to dust. 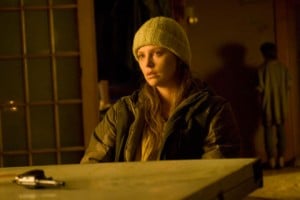 For fans of the book, this risks being a real disappointment. While the film is a competent, faithful adaptation of the source material, being merely adequate may not satisfy the novel’s rabid fans, since in its most critical areas The Road does not marry the lofty achievements of McCarthy’s prose with Hillcoat’s cinematic vision. The problems in The Road can be summed up in one word: interference. Although the press has been quiet regarding production difficulties, it’s possible to read between the lines. The financial woes of Miramax, their desperation for a commercial hit, the incongruous action-orientated trailer and the enormous gap between production wrap-up and final release all suggest executive meddling. Scenes are truncated, seemingly cut short before they have a chance to breathe, and consequently there is no real sense of a journey, of time passing, of a quest unfolding. Puzzlingly, certain emotional beats of the film are front-loaded, occurring before their significance can be fully understood. Newcomer Kodi Smit-McPhee isn’t bad as the boy, per se, but he seems far too well adjusted, too normal for someone who was born into a nightmare world, exposing daily to death and misery, and experiencing only suffering, terror, and pain. The film has a final act that should absolutely detonate, given the emotionally shattering final pages of the novel. But instead, it fizzles like a damp squib, the plot threads of this supposedly epic journey left untied, and the fathomless love between father and son unconvincing. The Road is a competent and passable movie, hiding the soul of a truly great and memorable film.