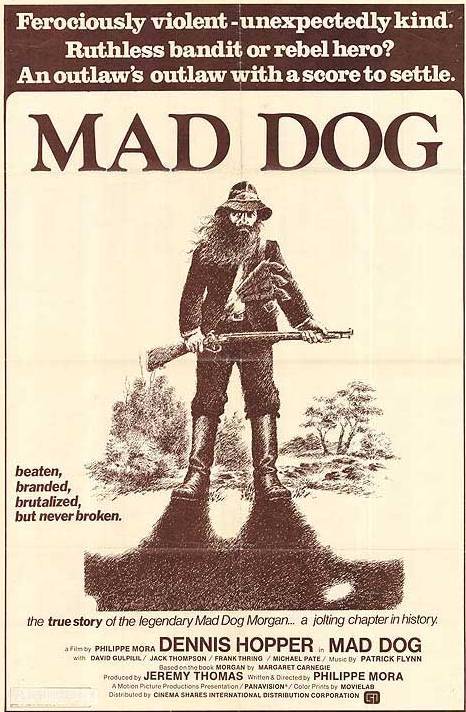 Philippe Mora’s Mad Dog Morgan, a violent true story and a 70’s classic that forever changed the way international audiences saw Australian cinema, is being released in a two-disc limited edition DVD set on November 24 from Troma. Dennis Hopper (Easy Rider, Apocalypse Now) plays Mad Dog Morgan, Australia’s most notorious criminal, with all the bravado that turned him into the decade’s most radical screen icon. Critics at the Cannes Film Festival praised Mad Dog Morgan and awarded it the John Ford Memorial Award for Best Western before it became a worldwide hit. The new two-disc set includes the shocking uncut version of Mad Dog Morgan (with graphic violence previously censored in North America!), That’s Our Mad Dog (a conversation with writer/director Philippe Mora and Dennis Hopper), a rare radio interview with Mora, new interviews with crewmembers, a locations featurette, and more!

One of the inaugural films of the Australian New Wave, Mad Dog Morgan set a new standard for artistry in genre filmmaking. It was produced when increased government funding launched a bonanza of cutting edge genre films like Mad Max and Long Weekend. The hit new documentary Not Quite Hollywood details this period and cites Mad Dog Morgan as one of the key films of the era for its tremendous influence (it was the first Australian film to receive US distribution) and stunning cinematography (it was one of the first Australian films to be shot with an anamorphic widescreen lens). Photographed by Mike Molloy (Shock Treatment, A Clockwork Orange) and produced by Academy Award winner Jeremy Thomas (The Last Emperor), Mad Dog Morgan stands as one of the crowning achievements of Australian cinema.