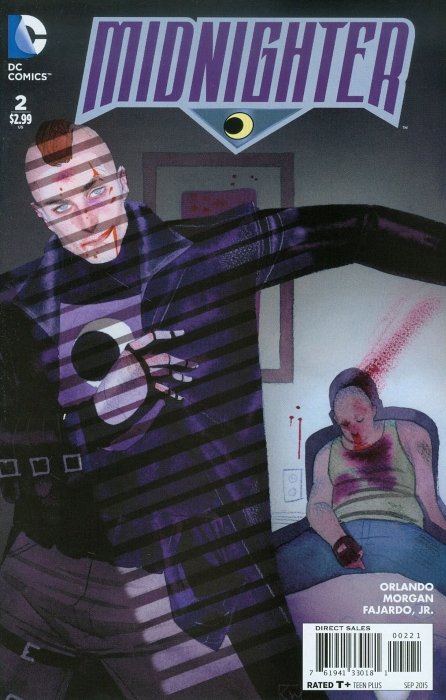 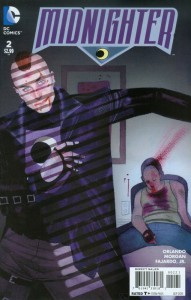 When Steve Orlando writes Midnighter (through two issues), he spends equal time on Lucas Trent’s personal life and violent crusade of justice, vengeance, or probably something in the grey area between those two extremes. Midnighter #2 does a lot of intersecting between these two beats with Midnighter going out on a date with a man he rescued last issue and getting a little down time in Russia  and “saving” the Windcrest Corporation from a woman named Marina, who is getting revenge on them for experimenting on her and killing her husband. The fight and conversation scenes give readers insights into Midnighter’s unique moral compass and fully conveys his motivation for fighting, which is redemption, revenge, and a little bit of fun. Midnighter is not the nicest of guys, and much of his dialogue is taunting snark, but he forges a connection with Marina by the end because he empathizes with their shared connection to the experiments of the God Garden.

Alec Morgan’s art on Midnighter #2 is stocky and solid just like the protagonist. Unlike Aco, he doesn’t use fancy panel layouts to show Midnighter’s computer like mind, but works closely with Orlando to craft a non-linear narrative and touch on the highlights of the past couple days for Midnighter. Morgan gives both Midnighter and Marina’s moves and punches a bone-breaking intensity and also varies his gutter placement to give a glimpse into Midnighter’s feelings, like a flashback where Apollo and Midnighter are having one final fight. Morgan’s tendency to linger on the “big moments” of a fight creates some nice catharsis at points, like when he handles a bar full of homophobes in two panels punctuated by a punch to the nose. There is one small problem with Morgan’s art, and it is that his crowd scenes lack the detail of the one on one fight and talk scenes he draws. 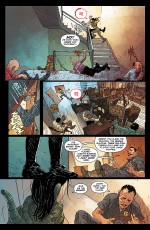 and physical setting of the comic. Moscow gets his dark greys, Midnighter’s most potent punches his blood reds, and the flashback scene with Apollo gets a melancholy grey hue with a burst of sun yellow. Midnighter’s costume is all black, but he isn’t just vengeance and darkness. (Unlike that slightly more famous fellow who dresses like a rodent, he seldom broods.) Fajardo balances the black with a slight halo of light to show that in his own way he represents hope to those who have manipulated by the Gardener.

But the major which helped Midnighter #2 go from good to great were Steve Orlando’s tender and a tiny bit tragic dialogue in the Moscow date scene. Midnighter might be having issues with the whole “being single” thing, but he’s not afraid to put himself out there in his own unique way. (Alien rescue and barbecue in Moscow. Sounds romantic to me.) But there is also his vulnerable side shown in little glances from Morgan or a quick, biting line from Orlando. It is refreshing to see a character who sees an army of mercs have a good time struggle with relatable, human things like the awkwardness of  dating after a long term, emotional relationship.

A few artistic discrepancies aside, Midnighter #2 continues to make its protagonist relatable and well-rounded while serving up hearty helpings of martial arts moves and general ass kicking. As a queer man, I am also incredibly happy to see a gay action hero, who has real fighting chops, an emotional character arc, and still has time for flirting and romantic chit-chat.