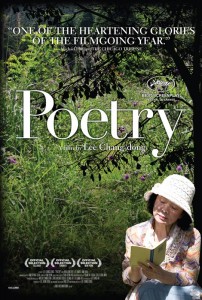 The most recent edition of Montréal’s AmérAsia film festival had as part of its lineup the ‘We Distribute’ section, which highlighted both some of the more recent successful Asian films but also the local film companies who willingly distributed them. Among such movies was Lee Chang-dong latest drama, Poetry (distributed in Canada by Métropole), which earned the admiration of the Cannes festival back in 2010, scoring the Best Screenplay award. Much like another director whose recent work played at the event, Kim Ki-duk, Lee Chang-dong has also taken the film world by storm over the past years with a enviable track record of compelling dramas.

Poetry is a complex tale surrounding a singular character, Mija (Yun Jeong-hie). In her mid sixties, she lives in a Bosan apartment with her stubborn, ungrateful grandson, the latter whom either ignores Mija entirely or replies to her simple queries in a monotonous, noncommittal tone. During a visit to the hospital for a slight pain in her right arm, she reveals that as of late she has been forgetting certain words. This strikes the doctor’s curiosity, who may suspect that Mija is suffering from Alzheimer’s disease. In attempt to keep her brain stimulated, she registers for a one month poetry class, the goal of which is to have written at least one poem by the course’s final day. Mija finds inspiration in simple things, such as fruit falling from a tree, or even the tress themselves, jotting down her most immediate and basic emotions on a small piece of paper she carries with her continuously. The creation of a poem pales in comparison to the tragedy which soon reveals itself when it appears that non other than her grandson may be one of several culprits in some sexual crimes which led to the suicide of a young high school girl. Suddenly, she must wrestle with her emotions, with her Alzheimer’s symptoms and the need to pay back the mother of the victim with a large sum of money. ‘…Poetry feels like the sort of movie a dicrector like Pedro Almodovar would make, only that in the hands Lee Chang-dong, the resulting product somehow demonstrates a wide array of emotions in the most austere manner possible. ‘

There is something very special about South Korean cinema which sets it a apart from the cinematic accomplishments of so many other countries. There is never a fear of meshing multiple genres together into one film. In fact, it sometimes feels as if South Korean cinema even embraces such freedom, accepting the challenge wholeheartedly and letting their mature creative wings spread. In a funny sense, Poetry feels like the sort of movie a director like Pedro Almodovar would make, only that in the hands of Lee Chang-dong, the resulting product somehow demonstrates a wide array of emotions in the most austere manner possible, preferring silence and simplicity in its moments of revelation rather than melodrama. Both techniques work and serve their own purposes, but the satisfaction derived from understanding a character as complicated as Mija in a film as emotionally ambiguous and mild mannered as Poetry is awe inspiring. For the writer-director to succeed in juggling all the plot threads evenly, ensuring that each resonates to the fullest capacity by the time the closing credits role is an achievement unto itself, given how so many others which have come before (and shall come afterwards), have failed. The film is evidently enough the work of a master storyteller and a master of balancing emotions so as to never sway the mood too heavily in favour of one particular tone as opposed to any others. Even the pacing is languid in the best way possible, taking its time to move from one episode to the next, revelling in the many details of Mija’s journey. Other than the duration of scenes, the issue of pacing also concerns the camera movements, which are delicate and slow for the most part, only revealing important clues when the moment feels just right and usually with  slow pans which allow the audience to take in the information comfortably.

The juxtaposition of emotions finds its place thematically within the movie as well, seeing as how, through all of the terrible misadventures poor Mija must live through, she nevertheless continues to write down short phrases on her trusty notepad whenever the moment feels right to record a thought or feeling. The professor of the class (played by Hira Kim), tries to explain to his class that writing poetry means seeing things differently, seeing things from all possible angles, which can also mean feeling things differently. Mija’s journey from the beginning of the film to its conclusion is one of discovery, in which she finally breaks out, albeit under conditions she would rather not have to deal with, finding some hidden strength within her that she never thought she had. This may have to do with finally taking charge of the household, or finding a large sum of money to pay a debt, or reconciling with the reality that her grandson is simply not a very good child. The script handles these elements exquisitely, all of which ultimately lead Mija to her poem at the very end of the film. ‘True enough, Mija is a sweet old lady, but actress Yun and director Lee create a much more layered individual than merely someone with a pretty smile, a nice hat and a delicate, grandmotherly voice.’

It arguably is not possible for a review of this movie to be complete which mention of actress Yun Jeong-hie, who portrays the piece’s protagonist. Following in the tradition of South Korean actors and actresses who create finely tuned performances dictated primarily by nuance, Yun proves to be remarkably adept at fulfilling the complicated requirements of the script and Lee Chang-dong’s direction. The easiest route to take would be to play Mija with more sweetness than anything else, this way the audience would be most susceptible to feel empathy or possibly even sympathy towards her character. True enough, Mija is a sweet old lady, but actress Yun and director Lee create a much more layered individual than merely someone with a pretty smile, a nice hat and a delicate, grandmotherly voice. She is fallible, she can feel too much pride to do something she feels ill at ease with, she can lie in order to appear better than perhaps she really is. Poetry features one of the best performances in recent years, period. Having the audience embrace the character to the fullest extent would have been too simple, and South Koraen cinema, at least in its dramas, rarely, if ever, likes to make things simple. Mija is very much a multifaceted protagonists, with the audience invited to bare witness to all her strengths and weaknesses as a human being currently under a lot of stress. She is imperfect and that is why the viewer likes her, not just because is she nice.

Poetry is one of the finer Koean films to have emerged onto the international scene, which is saying a lot when considering the stiff competition. Simply put, it feels incredibly mature, as if made by people who actually lived through the exact experiences depicted in the film. In case readers missed it at the AmérAsia Film Festival, it is currently available on DVD in North America.