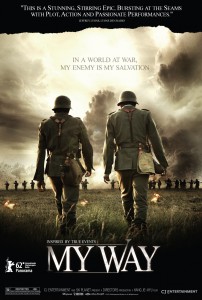 When Steven Spielberg made Saving Private Ryan, he set the modern day standard for an epic, moving war film. But for all his achievements, they were all but negated by his equally majestic failures in War Horse. However, in Kang Je-gyu’s My Way, the two seemingly incompatible narrative structures are fused together into one stunning, grandiose picture.

My Way tells the story of Kim Joon-sik (Jang Dong-gun) and Tatsuo Hasegawa (Joe Odagiri). During the Japanese occupation of the Asian peninsula, Tatsuo and his family move to Korea, where he lives with Kim and his family. When they both realize their mutual adoration of marathon running, their competitiveness, coupled with shared national resentments, lead to a fierce rivalry between the two.

When Japan goes to war with the Soviets, Kim and his friends are conscripted to fight alongside Tatsuo and the Japanese in the Imperial Army.  And when they become prisoners of war to the Soviets, and eventually the Germans, they must try to reconcile their differences in order to get back home.

Initially, the film does feel like it’s going to fall into the same traps and tropes of War Horse. Overly sentimental and melodramatic, the film tries its damndest to emotionally manipulate the viewer. However, these tactics, which usually fail, succeed in My Way, mainly because they involve actual human beings and not a bloody horse. Anchored by powerful performances by Jang and Odagiri, the film makes you care about their inner and outer turmoil. When they fight against each other, we, as an audience, are conflicted, and when they both fight against a common enemy, we root for them. This gives everything they do an added layer of immediacy, which, in turn, further engrosses us in their journey.

The film, although based on a true story, can feel cliché and obvious, but this is a case where predictability is an asset. In the beginning, the film employs a technique that discombobulates. Much of the beginning feels incredibly over-edited, with quick and constant cuts. Along with the persistent use of shaky cam, it can be hard to feel a sense of continuity and flow to the story. This is further compounded if you are not a native Korean, Japanese, German, or Russian speaker. Trying to figure out what happens in the technical mess of the beginning, while trying to read the subtitles, can prove difficult.

Even so, the film redeems itself by being easy to follow. The goals and purpose of each scene is readily made evident, and although this doesn’t excuse the poor editing, it does carry the film until the second and third act, when the film goes off with a bang.

When we get to the incredible action set pieces, you can’t help but be taken aback by the size and scale of the battles. Imagine the best scenes from Saving Private Ryan, Enemy at the Gates, and Letters from Iwo Jima, put them together, and you have an experience that’s worthy of being called an epic. The never-ending spectacle of war would be meaningless if we do not care for the characters in them, but because we do, they aren’t. Underneath the pile of dead bodies and rubble lies an underlying anti-war message. As Kim, and later Tatsuo, is forced to fight for foreign armies, we get an increasing sense of the futility and pointlessness of armed conflict, which gives the conflicts, and the characters in them, a strange melancholy dimension.

By the end, you like the film because it tries so hard to make you do so.