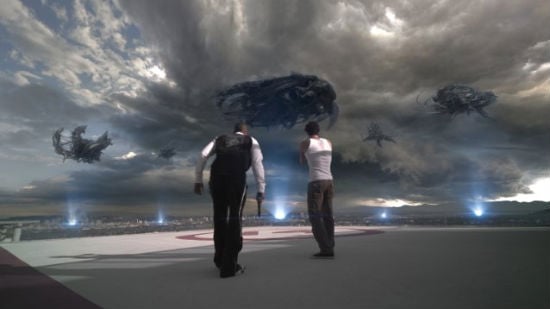 A short viral video was released for Skyline, the new sci-fi film directed by the Brothers Strause and starring Eric Balfour and Donald Faison. In all honesty it isn’t very good. In comparison to the chat roulette marketing campaign used for The Last Exorcism, you would think that the distributors could be a little more creative. Instead all we get is a blue light and people disappear. I’m still not convinced this movie is even worth seeing on the big screen and given that there are no press screenings, I can only assume the worst. You can see the video after the break and judge for yourself. Skyline opens Friday November 12th, 2010.

After a late night party, a group of friends are awoken in the dead of the night by an eerie light beaming through the window. Like moths to a flame, the light source is drawing people outside before they suddenly vanish into the air. They soon discover an otherwordly force is swallowing the entire human population off the face of the earth. Now our band of survivors must fight for their lives as the world unravels around them.