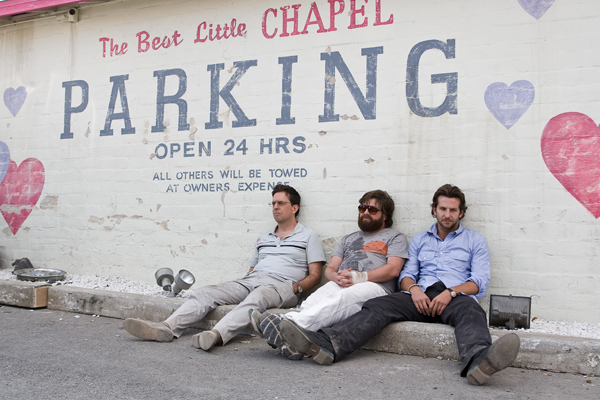 On Opening Day, Todd Phillips very funny “The Hangover” (I saw it yesterday, and I highly recommend it for good slapstick laughs) made 16.5 million dollars in one day alone.  “…The production budget was rumored to have hovered around only $30 million…”   which makes this a very impressive first day and bodes well for the upcoming weekend.  “Up” floated to a very impressive Friday total of “$13.5 million for an impressive $106.5 million (total)… in just 10 days.”  Number three on the Friday film grosses was an underwhelming performance by the Will Ferrell vehicle “Land of the Lost” made only “…7.2 million…” http://www.hitfix.com/articles/2009-6-6-the-hangover-lives-up-to-the-hype-with-an-impressive-16-5-million-friday/ Personally, I find it shocking that the opening night of “Land of the Lost” was so low, especially considering you couldn’t go five minutes without seeing a TV spot for it last week. As well, Ferrell was the first guest on Conan O’Brien’s first “Tonight Show” on June 1st.  However, the lucrative Saturday movie crowd may lift its gross significantly. “Bruno” wrapped up in legal trouble:

A few days ago, a woman named Richelle Olson launched a lawsuit against Sacha Baron Cohen.  During the making of “Bruno,” Cohen allegedly “…in character as Bruno-started using vulgarities while calling the second bingo game in front of a mostly elderly audience.  A struggle ensued after Olson tried to grab the microphone away from Cohen. She claims he then called his camera crew over, who attacked her for at least a minute…Olson’s suit states she ran from the stage and was found moments later by a co-worker, sobbing uncontrollably. She then fell to the floor, hitting her head on a concrete slab. The suit states she suffered brain bleeding as a result.”  She is allegedly seeking “…unspecified damages of more than $25,000.”  Yikes.  Sounds nightmarish.   http://www.usatoday.com/life/people/2009-06-03-bruno-suit_N.htm?csp=34

The suit is being contested by Universal Pictures, who released the statement:  “The allegations made by Richelle and Lance Olson in their complaint are completely baseless. Filmed footage of the full encounter, which took place more than two years ago, clearly shows that Ms. Olson was never touched or in any way assaulted by Sacha Baron Cohen or any member of the production and suffered no injury. If the Olsons elect to proceed with their frivolous action, we expect each of the defendants to be fully vindicated.”  http://www.thewrap.com/article/universal-responds-bruno-lawsuit_3496

The allegations do seem to have the ring of exaggeration (or perhaps fabrication) about them.  The much publicized “Borat” (Cohen’s last film featuring another alter-ego) lawsuits never involved anything approaching the kind of extreme violence inferred here, and it is hard to believe that someone on his film crew (especially director Larry Charles, who also directed  “Borat” and “Religulous”) wouldn’t have stepped in if these attacks were as brutal as Mrs. Olson has described.  I am curious to see the results of this legal action.  If indeed they are “baseless” as Universal claims, all Ms. Olson will have accomplished will be to give the film free international publicity.  The film is set to have a USA release date of July 10 2009. http://www.imdb.com/title/tt0889583/ Who you gonna call?

The rumours swirling around the possibility of a Ghostbusters 3 film are red hot right now.  Apparently, “Bill Murray, Dan Aykroyd, Harold Ramis and Ernie Hudson have agreed do the film,”  which would lend the film a degree of authenticity, given that it was their chemistry that made the first film so great.  In terms of new blood, apparently “reports of Alyssa Milano and Eliza Dushku as possible newcomers have surfaced as well.”  http://screenrant.com/ivan-reitman-answers-questions-ghostbusters-3-pauly-12058/ They are both strong actresses, and I cannot complain in that department.

In terms of the choice of director, “director and producer Ivan Reitman…may still opt to reclaim both roles when the film begins production as early as this winter.”  In terms of possible runner-up, “Dan Aykroyd has named Harold Ramis (Egon) as his favorite to replace Reitman if his schedule is too busy.”   The terrific comic actor and SCTV alumnus has proven his directing chops on comedies like “Caddyshack,” the terrific “Groundhog Day,” as well as “Analyze This” and its sequel.  The forthcoming “Year One” is directed by him as well. http://www.imdb.com/name/nm0000601/ I am surprised that I have not seen his name used to promote the film.  I guess Michael Cera is a bigger name right now than Ramis.

As to a Ghostbusters 3 director, there is a certain symmetry to bringing back the original director.  However, I thought the second film in the franchise was far inferior to the original.  Perhaps Ramis would make a more humourous film.  Anyway, it will be interesting to see how all this pans out in terms of casting, production, and plot.  We are still far away from Ecto 1 sounding its siren again. For now, those of us with Blu-Ray will have to content ourselves with the release of the two original films on June 16, 2009. http://moviesblog.mtv.com/2009/06/05/ivan-reitman-could-return-to-direct-ghostbusters-3/ Cool, remastered Mashmellow Man…