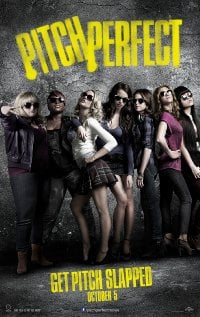 Too many people making romantic comedies and coming-of-age stories are tied down to a criminally punishing three-act structure and conventions defined both by standard-bearers of the genre and by studio mandates. Otherwise entertaining films like For a Good Time, Call… and Bridesmaids shift gears and allow boring, seen-it-before plot machinations to grind their pacing to a halt, simply because we’ve been conditioned to think the leads in these lighthearted movies have to go through the motions of unnecessary conflict. Such is the case with Pitch Perfect, which is most enjoyable and wry when screenwriter Kay Cannon is able to drift away from typical character beats and motivations. The film, boosted by fiercely funny performances from Anna Kendrick and Rebel Wilson, is smart and exciting until the plot rears its ugly head.

Kendrick, one of the best and most intelligent actresses of her generation, plays Beca, an incoming freshman to Barden University who’s content to suffer through the year with her stereo headphones blocking out the world. Beca wants to leave school and move to Los Angeles to be a DJ. However, her father, a professor at Barden, is only willing to help her achieve this goal if she joins a school club for a year. Soon, she’s handpicked by Chloe (Brittany Snow) to join the Barden Bellas, an all-female a cappella group hoping to dominate an upcoming collegiate a cappella event a year after a disastrous and disgusting appearance that serves as the film’s prologue. Quickly, Beca butts heads with Aubrey (Anna Camp), the Bellas’ controlling leader who’s content to stick with old favorites like Ace of Base’s “The Sign,” even if audience members and judges are on the verge of sleep when the Bellas hit those familiar chords. The inter-team feuding is set against the group’s tense rivalry with the Trebles, an all-male Barden a cappella troupe led by the outrageously arrogant and outrageously named Bumper (Adam DeVine). Running parallel to this opposition is Beca’s growing attraction to charismatic new Trebles member Jesse (Skylar Astin).

The plot of Pitch Perfect is at best familiar, a hybrid of bright, colorful competition films like Bring It On and modern romantic comedies. What’s so fresh is the execution, often leading to unexpected and welcome laughs. Though most American audiences may remember her from a small role in Bridesmaids, this is Rebel Wilson’s first major, get-to-know-you turn, as Bellas member Fat Amy. (Fat Amy calls herself that so thinner girls can’t.) Wilson is a constant delight, serving as an audience surrogate much as Beca does; frankly, the film wouldn’t work as well if every character deified a cappella singing the way Aubrey and Chloe do. However, Wilson has been let loose by director Jason Moore (making his cinematic debut, after directing such subversive musicals as Avenue Q), ad-libbing—or appearing to ad-lib—in most of her scenes. Though some recent Judd Apatow-produced comedies have encouraged ad-libbing among their performers to a detrimental degree, Wilson’s riffing is welcome in Pitch Perfect. She’s not the only source of laughter in the film, but arguably, she’s one of the few actors you wish could be in every scene.

As Beca, Anna Kendrick continues to prove her versatility as a performer. She was the best part of Up in the Air, for which she deservedly got an Oscar nomination, and yet you’ll find no traces of the uptight businesswoman in her portrayal here. Beca’s willingness to push the world away before it gets too close eventually becomes a character flaw, but her self-imposed distance allows her to poke holes in the Barden Bellas façade, a necessary trait in Cannon’s script. Kendrick also has a sweet, strong singing voice, making it so Beca’s growing dominance over the group is well-earned.

Camp and Snow have more thankless roles, that of the shrewish antagonist and the well-meaning but unassertive sidekick. Both actresses are fine, but the script doesn’t allow them much leeway. Take Aubrey, for example. When she’s not’s attempting to run a mini-dictatorship over the group, Aubrey is simply unable to hold in her last meal. (The less said of this, the better, but the latter trait leads to a random, inexplicable, and unfunny gross-out setpiece that could’ve easily landed on the cutting-room floor.) Really, the only flaw in Pitch Perfect is that the script struggles to cohere into a whole final product. The cast—other standouts are Astin, an adequately charming love interest; John Michael Higgins and Elizabeth Banks, as Christopher Guest-esque a cappella announcers; and Hana Mae Lee, as the most soft-spoken Bellas member—aren’t only magnetic, they’re enjoying themselves. (By itself, actors having fun onscreen isn’t a guarantee the film they’re in will be. Here, it helps.) Cannon, a writer on 30 Rock, brings a fast-paced, manic sensibility to the script that lends itself to sharp and laugh-out-loud funny one-liners. However, the third act has a few random, tossed-off conclusions to various subplots that only make those arcs feel even more superfluous. And the tendency to throw in false conflicts into the character relationships merely pads the running time. Pitch Perfect is snappy and witty more often than not; unfortunately, as is often the case these days, this movie should be great, but it settles for being merely good.