Quentin Tarantino’s newest feature, The Hateful Eight (“The 8th Film From Quentin Tarantino,” as the opening credits remind viewers), is his most violent film ever. Every act of violence is similar to something from his previous films, but never has Tarantino devoted so much of a single film to non-stop carnage. It wasn’t always like that. His first three films, Reservoir Dogs (1992), Pulp Fiction (1994), and Jackie Brown (1997) now seem positively chaste compared to his films in the wake of Kill Bill (2003/2004). Tarantino’s work from the last decade and a half has increasingly moved away from depictions of crime-related violence to gore more firmly rooted in the horror genre.

Viewers who discover Tarantino through his first three films are usually drawn in by his skill as a writer of dialogue. The opening diner scene in Reservoir Dogs, where the characters analyze “Like a Virgin” with previously unthinkable seriousness, is the first clue that the film is attempting to do something new and exciting in the crime film genre. The dialogue, not essential at all to the plot, still manages to be witty and fascinating, despite that fact that most filmmakers would have omitted it from a final cut. Pulp Fiction one-ups that scene when two of its protagonists arrive too early to a hit they’re supposed to be committing and decide to step aside to chat and compare their foot massage techniques while they wait. It’s a gutsy scene and one of the first indications that the film would be something new and special. All of Tarantino’s films feature similarly long scenes where the characters step away from their duty to advance the plot and just say whatever is on their mind. However, Tarantino’s films since Kill Bill have downplayed these instances and given much more screen time to violence and gore.

Most of the violence of Tarantino’s early films involves guns. Films have made gun violence seem almost inconsequential to many viewers, so even the most violent parts of the early films are rarely shocking to contemporary viewers. The unrealistic way that Tarantino stages gun violence also contributes to its lack of immediacy; characters may do a balletic dance through the air after being shot, or somehow find another five minutes to give one of Tarantino’s speeches even with a bullet in their gut (or a whole movie, in the case of Reservoir Dogs). In Pulp Fiction, expressionistic lights flash when Vincent and Jules do their first hit, making the murder seem surreal and distancing the viewer. Even when Vincent is killed later in a much more realistic fashion, his death mirrors a scene from Three Days of the Condor (1975). Viewers familiar with that earlier scene will recognize it as a reference and not have the same kind of emotional reaction they might have had without the reference. Violence happens often in Tarantino’s first three films, but rarely does it consume the film. 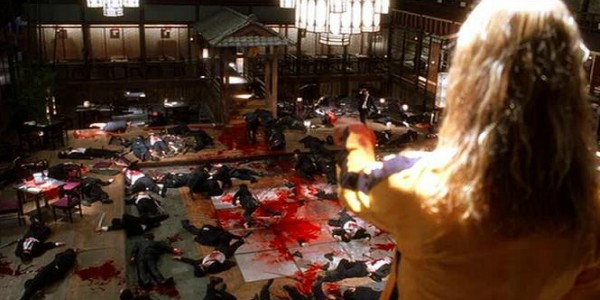 That’s not the case with Kill Bill. The first part of the film (it was split into two parts due to its four hour running time) is obsessed with violence, even gore. Beatrix Kiddo, an assassin obsessed with revenge against her former friends and lover, has lived a life devoted to death and destruction. Fittingly, her quest will involve even more violence. Unlike the previous films, the primary weapon of Kill Bill is a Japanese katana. This changes the character of the film’s violence; instead of red-colored bullet holes, now the audience is bombarded by flying limbs and men being impaled on swords. It’s a much more visceral kind of violence, and some audience members are repulsed at the site of someone having the top of their skull cut off or their organs spilling out from their torso. Despite these moments, much of the first part relies on stylized, even comical violence. When Kiddo impales a squad of similarly-dressed ninjas, cartoonish fountains of blood spurt out from their wounds. It’s clearly just water and some red food dye, but its outrageousness intentionally blunts much of the impact. The second part of the film is even more reserved, with a greater focus on Tarantino’s dialogue and sense of humor. That focus would be considerably diminished in Tarantino’s next project, the action/horror film Death Proof (2007).

From his earliest films Tarantino has displayed his love of Giallo, a genre of Italian horror films that often involve mysterious slashers, elaborate set pieces, and an operatic use of violence. Music cues or small references can be found in all of his films, but starting with Kill Bill the references became much more obvious and common. Although Death Proof has fewer explicit references and allusions to Giallo films, the attention to detail in the film’s gore scenes is very similar to that genre. Like Giallo killers, Kurt Russell stalks a group of women, and although his identity is known, his motivations are still unclear. When his death-proof car collides with theirs, the individual acts of gore recall the baroque acts of violence found in Giallo. The camera focuses on each victim in the car and then repeats the collision to show another death; one woman is violently ejected, another is showered with glass shards, another has her leg cut clean off, and another has her face ripped off by the death-proof car’s spinning wheel. It’s the most violent moment in Tarantino’s oeuvre up to that point. Death Proof also signaled a diminished role for the conversations he had become famous for. The film has a series of these free-form conversations early in the film, but they lack the sparkle of Tarantino’s best dialogue, and reveal nothing about the characters other than that one of them is a narcissistic boor. In the film’s latter half, the second set of female protagonists have much more engaging conversations, but it’s simply too hard to make up for the mistakes of the first half of the film. 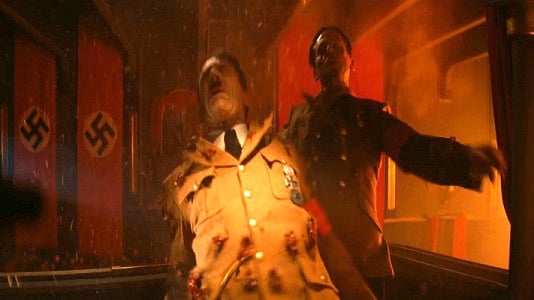 Tarantino’s next feature, Inglourious Basterds (2009) has fewer obvious references to Giallo than previous films, but also features some of Tarantino’s most extreme violence yet. In one scene, a German officer is beaten to death by one of the American soldiers with a baseball bat. The scene is allowed to play out for a number of seconds and is one of the most realistic acts of violence in a Tarantino film. In the film’s climax, Adolf Hitler is gunned down by two soldiers with machine guns until his face is essentially dissolved by bullets. They proceed to fire on the rest of the crowd trapped in a burning movie theater, with their victims squirming in a hail of bullets. The prosthetic Hitler head that is destroyed by gunfire is not particularly realistic, but it allows Tarantino to create something exceptionally bloody. As with Death Proof, Tarantino’s dialogue writing seems to have suffered. On one hand, any scene with Hans Landa is absolutely riveting, but many of the scenes involving the Americans end up falling flat, calling into question whether Landa’s scenes are so intriguing because they have Tarantino’s best lines, or just because Christoph Waltz’s charmingly demonic performance is so spot on.

Tarantino’s two most recent films seem to be almost polar opposites in terms of his use of violence. Django Unchained (2012) features the fewest acts of violence and gore of any of his recent films, though the violence that remains is more realistic than either Death Proof or Inglourious Basterds. In fact, at no point does Django Unchained feel like it is slipping into horror film territory, something that both previous films do at times. However, Tarantino’s newly-released film, The Hateful Eight, returns to that horror mood. Ennio Morricone’s score makes it clear from the opening seconds that, despite the Spaghetti Western trappings, the film will be much darker than a traditional western. The first half of the film remains in line with what once would be expected from a Tarantino film: long bouts of exposition written in an engaging vernacular, hilariously blue exchanges between rivals, and plenty of casual racism (although at least this time it’s a bit more appropriate than in some of his films set in the present day). The film’s second half turns into a drawing room murder mystery with plenty of the Grand Guignol thrown in. Some characters die in simple ways, the standard barrage of gunshots, but others die in much more gruesome ways. Heads are blown completely off, poisoned characters vomit buckets of blood that is both comical and stomach churning, and a scrotum is severely damaged. Even those who are relatively unscathed still end up covered in brains. Much of the violence is as fascinating to watch as it is nauseating, but Tarantino’s verbal abilities are completely lost during the symphony of violence. Greg Nicotero, perhaps best known as the gore meister for The Walking Dead, receives second billing in the film’s end credits. It’s an audacious spot, but completely appropriate. When The Hateful Eight begins its violent descent, Tarantino no longer uses words to communicate. Instead, he relies on images of Nicotero’s gore. There’s nothing inherently wrong with that kind of violence, but when it comes down to hearing Tarantino’s dialogue or seeing his gore, many would choose the former.

In a recent review of The Hateful Eight, Richard Brody of The New Yorker makes an astute observation about Tarantino’s cinematic idols. Tarantino originally showed reverence for director’s like Martin Scorsese and Jean-Luc Godard (his production company is even named after one of Godard’s most popular films), yet this reverence has been replaced with a devotion to minor directors best known for low-budget exploitation films and obscure martial arts cinema. It certainly explains Tarantino’s creative descent in the wake of his first three films. It’s still left to be seen whether The Hateful Eight is an extreme from which he can bounce back, or whether it is just another stop along his journey toward emulating these filmmakers.