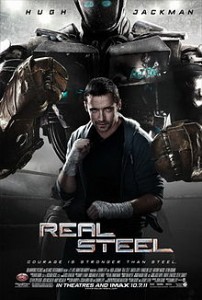 Written by John Gatins, story by Dan Gilroy and Jeremy Leven, based in part on the story Steel by Richard Matheson

Real Steel is a Frankenstein Monster of a film assembled from the spare parts, overheated cliches and hackneyed plots of dozens of terrible sports movies, combined with references to real boxing matches, built on the detached spine of a Twilight Zone episode and featuring robots that look like they were designed based on a 60’s kids toy.

And God did I love it.

There is always the question when you watch a film that alternates between funny and terrible sometimes in the same scene, whether the filmmaker intended the film to be funny/terrible or whether the humour is unintentional, but I think we can safely conclude that this film is deliberately built from the finest in filmic fromage. In 2020, Charlie Kenton (Hugh Jackman) is a down-on-his-luck ex-boxer who once almost beat the number one contender in a tune-up match. Humans don’t box anymore with the introduction of robot boxing. (Steel) Charlie loses his last robot in a small-town carnival match. While leaving town, one step ahead of the local promoter that he owes $20, 000 to, Charlie is told that his ex-girlfriend has died and he now has custody of his eleven year old son, Max (Dakota Goyo) that he has never met. (Over The Top)

Charlie manipulates the custody situation to raise the money to buy another robot, but it is also destroyed in a fight. Max and Charlie break into a scrap-yard to scavenge parts to build a new robot, where Max finds “Atom” an old sparring robot whose shadow function makes him eerily sentient. (Short Circuit)

Despite Charlie’s misgivings about the robot’s lack of size and offence, Max insists that they repair the robot and enter him in underground robot boxing matches. (Every Which Way but Loose)

Charlie, Max and Atom keep winning matches until they are offered a legitimate match in a preliminary bout for the World Robot Boxing league. (Champion) After overcoming the odds to win the match, Max steals the ring announcer’s microphone and riles up the crowd (Bad News Bears in Breaking Training) to demand a match between Atom and the WRB champion, an unbeaten robot named Zeus (No Holds Barred).

After more plot contrivances swiped from Over the Top, Max, Charlie and Atom get their match against Zeus. During this climatic match, the filmmakers drop in allusions to Rocky, When We Were Kings, the Tyson-Douglas fight and the Leonard-Hagler fight (which makes sense since Sugar Ray Leonard was the boxing consultant for the film.)

If you want to argue that Short Circuit, Every Which Way But Loose, Rocky and When We Were Kings are great movies, you won’t get an argument from me, but to go out of your way to make allusions to Over the Top, No Holds Barred and Bad News Bears in Breaking Training shows a ridiculous affection for Bad Sports Movies that you have to admire. The actual boxing is first-rate, filled with little touches that make it work, like the way that the fighting gets more civilized but the promoters get more dishonest the higher up the ladder Max, Charlie and Atom climb, or the way that the robots stop dead when the bell sounds between rounds.

Dakota Goya is wide-eyed and bushy-tailed as the enthusiastic Max. Jackman is a charming, likeable  rogue as Charlie. It is not Jackman’s fault if some of the details about his character make little sense. (As an example, there is no way that anyone that pretty had a 25-19 record with all the fights ending by knockout.) Evangeline Lilly is great but under-used as Charlie’s land-lord, mechanic and girl-friend Bailey Tallet, the daughter of the man who trained Charlie to box.

Real Steel is great, funny, and terrible all at once, but how can you hate a film that features a boy teaching a robot how to dance “The Robot”?