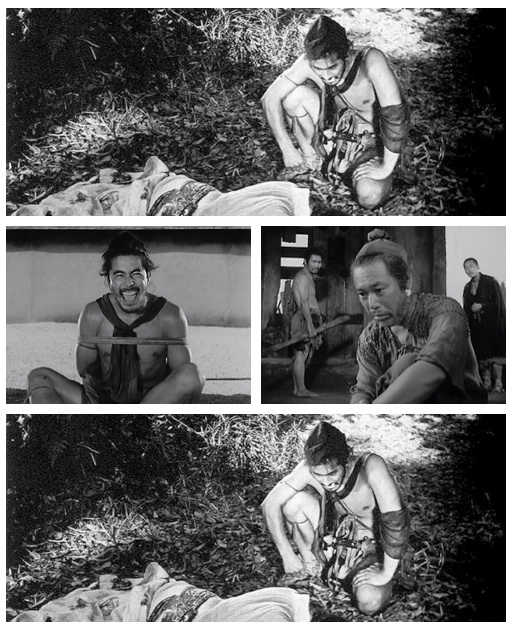 So I thought I’d kick my contribution off on our brand new review blog by talking about an old classic, namely Michael Bay’s 2009 seminal masterpiece, Transformers 2: Revenge of the Fallen. But then I decided to dig a little deeper, and instead discuss the 1953 classic Rashomon, from Japanese directing legend Akira Kurosawa. Why the switch, you ask? Well, I’ll leave the intellectual philosophising of what robot balls are trying to say about modern society to someone more intelligent than me.

Rashomon is the third classic masterpiece that I’ve had the fortune of seeing this year (the other two being David Lean’s Lawrence of Arabia, and Charlie Chaplin’s Modern Times). Now whilst I am excited when I begin a movie I’ve heard so much about, I can’t help but always have a level of trepidation as to whether the aspects that made any given movie a classic can be seen only by those who go into it with a fresh mind. In the case of Rashomon, the movie is commonly known for pioneering the technique of telling the same story through different angles, illustrating the unreliability of witnesses, among other things. As someone going into the movie for the first time, I can see how such a technique would be mindblowing and show how firm a grip the director has on the unfolding story; however, my concern was whether the movie had enough for someone like me, who was well aware, and in fact expecting, this technique to be used. And like the other two classics, I foudn the cinema had much more to offer than just pioneering the multiple perspective technique.

The movie begins in the middle of a massive rainstorm, from which a man seeks refuge in a temple. Along with shelter from the storm, the man finds a priest and a woodcutter sitting despondently, both of whom are saying they’ve heard a story so strange it has shaken their faith in humanity. After some prodding, the priest and woodcutter both tell a story of a murder that happened in the woods, and how the three tales told (by the three participants) all paint very different pictures of what actually happened. Of course, the newcomer, being perceptive among other things, eventually determines a fourth source for the story, one that gives us possibly the only accurate account of what happened (though possibly not). As the rain subsides, the cries of an abandoned baby are heard from within the temple, and the reaction of the three men to this sight really speaks of their true nature, regardless of their words and actions up to this point.

Despite the murder mystery seemingly at the centre of it, I did not see this movie as a whodunit. Indeed, the question of how the person died was, in my mind, about as relevant as the question of why Hans Gruber chooses the Nakatomi building to steal from in Die Hard; that is to say, it is the catalyst for the film’s events, but not an important factor in the final product. Rather, Rashomon is an examination of humanity, and the heights and depths that it is capable of. The fact that the narration occurs in a temple is not insignificant; the three men can be seen as otherworldly figures looking down at Earth. The way I interpreted it was that the priest was good (as evidenced by his clearly shaken faith in humanity, as well as his desire to comfort the baby upon finding it), the newcomer was evil (as evidenced by his cynicism, as well as his desire to steal the kimono upon finding the baby) and the woodcutter was humanity’s representative in this cosmic debate on the true nature of people. The baby could, likewise, be seen as Earth itself, being entrusted to the care of humans at the end, while the rain was indecision, opaqueness, an inability to see true mankind, in whatever form it may be.

Which is not to say that the story of the three participants of the murder (the thief, the woman, and the dead husband) is any less an exploration of the faults of humanity. Kurosawa very excellently uses the multiple perspectives not simply as a flashy gimmick, but a tool to display the lies people tell to manipulate their image to outsiders, and the lack of innocence and true faultlessness. Not even the murdered man, telling his tale through a medium, turns out to be guilt-free in the whole affair, and the entire story, once seen from all four perspectives (as the newcomer accurately determines, the woodcutter was a silent witness to the entire affair) does leave one with a sinking feeling in their stomach, because if this is how humans behave in the absence of crowds, then what hope is there for the population at large? The period when this came out, less than 10 years after the dual atomic bombs Japan had dropped on them by the US in WW2, is significant in understanding where this seemingly bleak outlook that Kurosawa adopts comes from, but not in grasping the outlook itself, as the relevance of this exploration has not been lessened by time.

One thing Kurosawa does not offer here is any easy answers. The murder, and the rape that precedes it, seem to be, when all is said and done, senseless acts of violence that don’t accomplish anything in the end, and no attempt is made on Kurosawa’s end to change that. The viewers are left to draw their own understanding of why such a thing happened, whether it can happen again, and what it says about people. Which is not to say that the ideas are not explored, quite the contrary. Many movies have posited some interesting ideas, only to abandon them after scratching the surface, but Rashomon stands out as a work that manages to allow the viewer to arrive at their own thoughts while fully exploring all the ideas and themes it initially set out to do.

Despite the seeming despair in humanity that casts a shadow throughout the movie , the final message is one of hope, that despite such depths that humanity can fall to, it is inherently good. The aforementioned baby is handed by the priest to the woodcutter, who asks to raise the child despite having six of his own already, just as the skies clear and the rain ends. The message is clear; Good has not given up on mankind, and mankind should not stop doing good, no matter how much bad they may also do. And that is a message that transcends time.

Overall, this movie that kept me glued to the screen during its entire runtime, and left me thinking about it long after it was over. The movie exceeded all the expectations I had of it from years of hearing its praises, and rightly deserves its classic status.