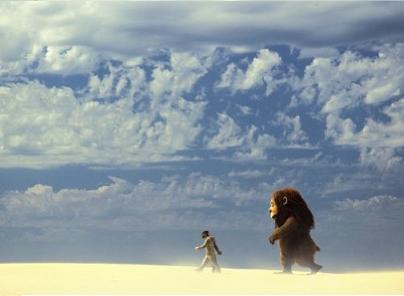 As I left the cinema Friday night still reeling from my experience, I realized that the perfect barometer for Spike Jonze’s Where the Wild Things Are was the 4-year old girl walking with her mom in front of me. Throughout the film I could hear her alternating between laughing, crying and screaming. In a nutshell, those are exactly the kind of emotions that this movie elicits.

The hype surrounding Jonze’s latest creation (ten years in the making) was deafening and the stakes were high considering last year’s mini-debacle when test footage leaked online spurred many to lash out against it. However in his traditional perfectionist style, Jonze took it all in stride and eventually created a truly beautiful interpretation of Maurice Sendak’s famed children’s book.

Once our protagonist (a neglected Max Records) escapes to the island where the wild things are, long-time collaborator and brilliant cinematographer Lance Acord relies on simplicity to convey his idea of pure, unadulterated fun. Using mostly a handheld cam, Jonze and Acord follow the newly-appointed king (Records) and his rag-tag, bickering followers (monsters voiced by James Gandolfini, Catherine O’Hara and Forrest Whitaker, notably). The Wild Things, who essentially personify a bunch of innocent, schoolyard kids, interact with Max in such an easygoing way that it’s hard not to develop a natural fondness for them. Like any kids their age, they lack the evil tendencies that adults have to judge and scrutinize, and thus Jonze takes us on quite an exciting ride where we witness the trials and tribulations of their newfound friendship. Jonze’s creativity is unmatched here and during several scenes, I was reminded of my first couple viewings of Labyrinth, and how that magical aura made me feel every time I saw it. This is no different. Although the direction of the plot often switches back and forth from happy to sad (perhaps once too often), it’s a story that is simply too good and heartwarming to dislike.

Ultimately the studios who produced this movie (Village Roadshow and Legendary) decided not to market it as a kid’s movie and I commend that decision. The subtleties and undertones are simply too demanding for a child who might only appreciate half of the film’s content. It can get pretty hectic at times, too, such as when Max and the Wild Things take an impromptu nap together, with the former caught in a rather claustrophobic situation, or when the tensions mount towards the end and one of the Monsters storms off in a violent manner. There are simply too many adult ideas about childhood for children under the age of 10 to grasp.

The soundtrack is poppy and you will often find yourself tapping to the beat; it’s one of those scores that will remind you of the times you just let go and enjoyed the freedom associated with being a kid. While simple in its aesthetics but clever in its delivery, this is a story you’ll want to see more than once. A classic for many years to come and a guaranteed Oscar nomination for Jonze.