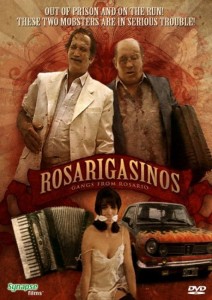 Old habits die hard in Rodrigo Grande’s Rosarigasinos, a crafty little tale of rebirth and revenge. Imagine being separated from the world for 30 years.  Imagine everything you once knew as life switched, grew, disappeared, died, or just simply changed, while you were away.  Would you be excited for the new changes in the world or fear its progression? Rosarigasinos (The Gangs of Rosario) uses these questions to create a world where for Tito (Fredrico Luppi) and Castor (Ulises Dumont), the only happiness is getting back what was once lost. Effectively balancing its comic action (even dusting off some out-of-shape slapstick bits) and its dark criminal characters, Rosarigasinos is a superb addition to the stupid criminals, stupider crimes sub-genre.

From the pitifully hilarious opening scene to the humbling ending, Rosarigasinos is a great buddy film, filled with disastrous characters doomed to repeat the same mistakes again and again. I couldn’t help but draw similarities to Hollywood super-duo the Coen Brothers who, like Grande, create deeply flawed characters who provide humorous and heartfelt attempts at making their lives better.  Think O Brother Where Art Thou (2000) meets The Godfather, but made in Argentina and filled with Tango music instead of The Soggy Bottom Boys/Nino Rotas (a mash-up I would girlishly scream to hear.) The story follows two ex-cons, Tito and Castor, and their rebirth into the “new world” after their release from the slammer for a 30 year stint.  The changes in the world and their newly granted freedom are clearly far too much for the boys (Castor literally does a double take at a passing garbage truck outside of the prison’s front gate.) Foreshadowing their inevitable failure, their luck shortly turns sour as nothing is there to greet them other than a thunderous rain storm, to which Tito optimistically notes  “It’s a good thing we were inside for 30 years – when we went to jail there were no trees on this street.” The trees, like the bars to their cells, momentarily shelter them from the real world and the trouble it bestows upon them.

Rosarigasinos is not only a playful story about dark characters but also an interesting reflective look at the gangster film, using interviews of people the boys encounter along their journey as comical little character studies is a well-fitted technique for giving us more information about Tito and Castor without having to actually go through the trouble of showing it, also the film’s use of song as narrative driving force was truly great.  In one scene where Tito and Castor perform for “the boys” as they used to do back in the day, singing the songs of Rosario, Tito croons away: “We’re still the same assholes…30 years could not have made us that old,” a statement even he sounds unsure of as he boasts over Castor’s accordion playing. It’s these unorthodox scenes the film throws you which make it so enjoyable to watch.  In another great scene, Tito and Fatso (one of the “old boys”) create some sort of reverse game of chicken or a backwards duel, in that they each begin walking away from each other, pace for pace, shouting out their demands until one of them cracks.  This is a truly odd scene but works perfectly with the nature of these tough but tired and desperate characters.

Rosarigasinos is a confident film, free of filmic inhibitions. Grande creates a dark, depressing and yet playful and romantic look at the gangster life, which without the assertive hand of Grande could’ve spun out of control into the vast pit of overambitious tropes that so often plague these independent pictures. Backed by a strong yet simple storyline, Rosarigasinos draws the viewer into its doomed characters and plays with their out-of-control lives.  Whatever Rosarigasinos is, it without fault works its stuff on stage for your pleasure.