If you’ve heard of Salt and Sanctuary, you’ve no doubt seen it compared to From Software’s now-(in)famous Dark Souls series, and this comparison is certainly not without merit. Salt and Sanctuary is more than a little derivative despite the shift to 2D, to the point where some may even raise questions and concerns about intellectual plagiarism.

While none of this is necessarily unfounded, Salt and Sanctuary does plenty to stand on its own as a fantastic side-scrolling action RPG. Be warned, though; if Dark Souls wasn’t your cup of tea, there’s probably not enough of a difference here to keep you invested.

Salt and Sanctuary begins with your custom-created character trying to thwart the kidnapping of a princess before being brutally beaten by a Lovecraftian monstrosity and thrown overboard (at least, that’s what happens if you play as well as I did). When your character finds themselves washed ashore on a mysterious island, the journey to rescue the princess and return safely begins. While there’s more to this story than initially meets the eye, it never does much to keep players invested. 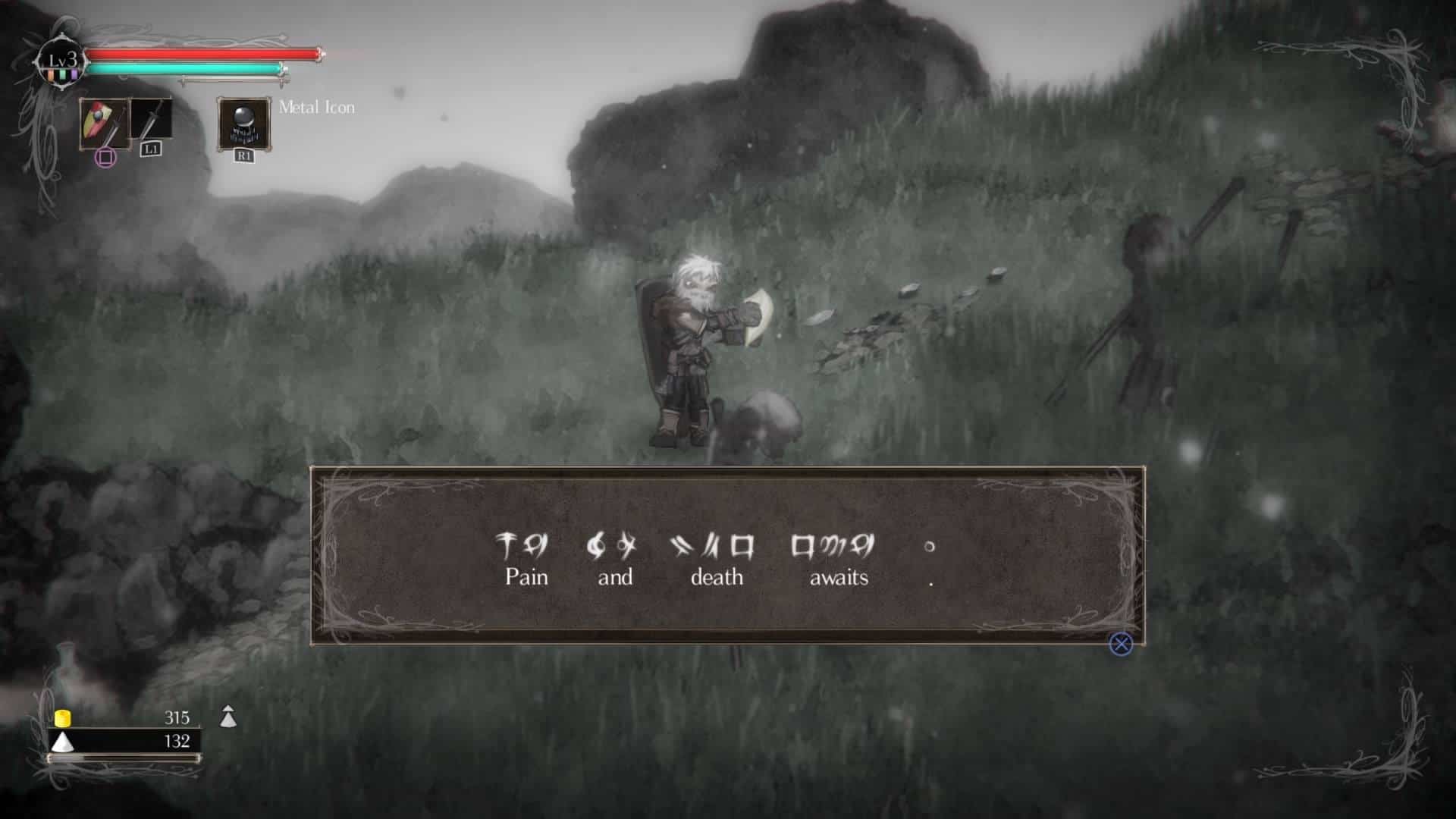 Lucky, then, that the gameplay is so compelling. Characters can be built in an immense number of different ways, from heavy armour-wearing knights to the classic wizard to actual ninjas – it’s easy to make (or break) whatever kind of fantasy archetype you can think of. While balance isn’t perfect – with shields and magic being as powerful as you’d expect from anything Souls inspired – every build I’ve tried has been perfectly viable.

This brings me to one of my problems with Salt and Sanctuary, however. The character creation screen is vague, never fully explaining the decisions you have to make. For example, the game begins with the player selecting a class, but there’s no description of what each class is capable of or best suited for, short of visually displaying their starting equipment. This isn’t a problem for self-explanatory classes like the warrior or mage, but tells us precious little about the chef class. Does my place of origin affect anything but my skin colour? I honestly still don’t know.

This is an unfortunate holdover from the Dark Souls series by which Salt and Sanctuary is so obviously inspired. Where Souls was purposefully vague in order to build community interaction, Salt doesn’t (currently) have the community to carry this kind of mystery. While there’s a good chance that the community will grow to explain all of these things away, that doesn’t help new players make smart choices, the effect of which is felt more severely in such a difficult game.

Yes, of course, it’s difficult. Not nearly as much as the Souls games – and I’ll try to stop these comparisons, but the game borrows so heavily from the series that it’s hard to avoid – but the game is much more difficult than most. Fortunately, it’s also generous with the placement of Sanctuaries – areas where your character can rest, recuperate and restock. 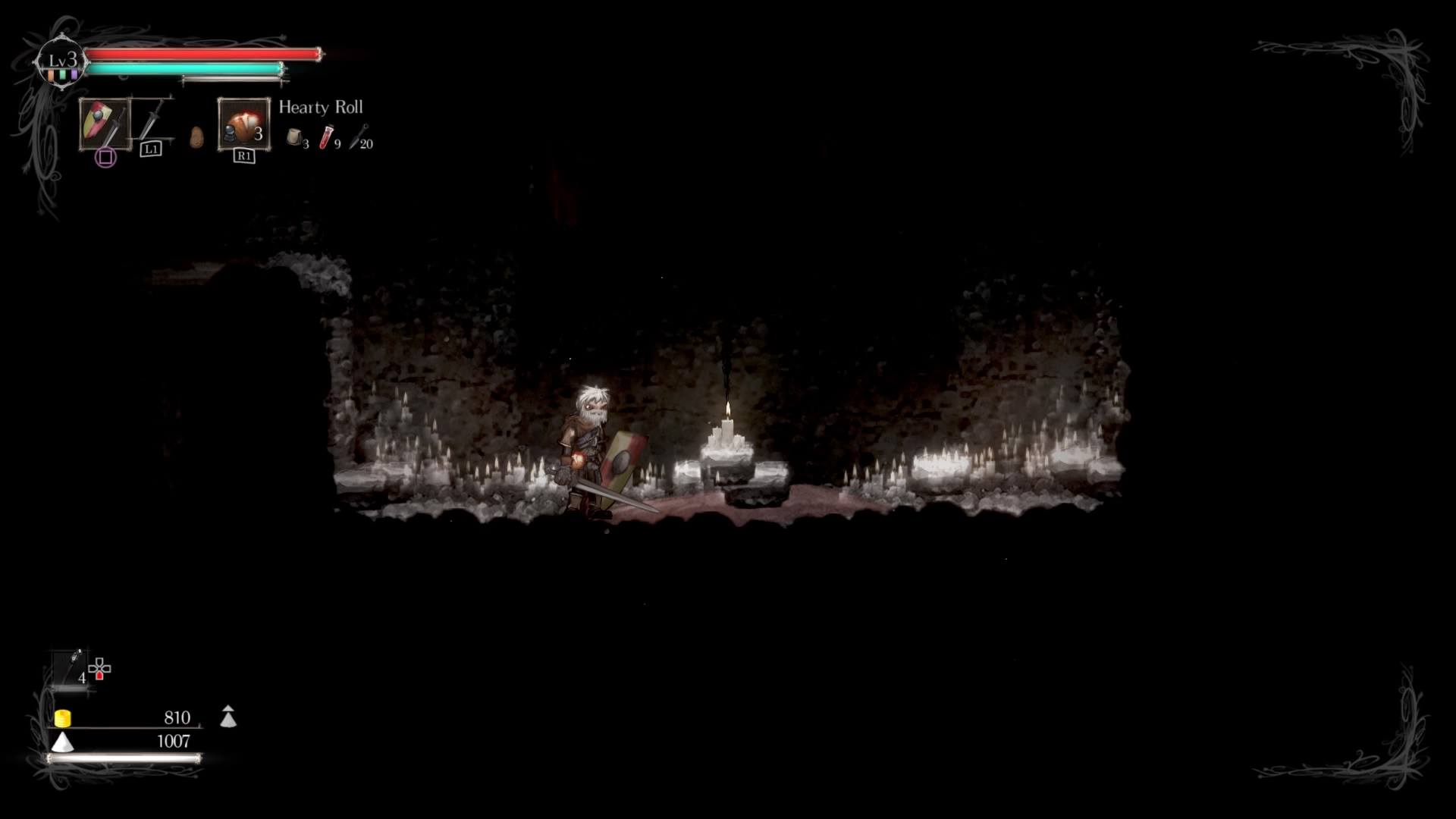 Sanctuaries can also be used to summon and house various NPCs, including one that a second player can assume control of for some jolly cooperation (or competitive beatings). These NPCs range from essential to worthless – the Merchant, for example, I didn’t use once throughout my entire play through. On the other hand is someone like the Guide, who can teleport you to any other visited Sanctuary, which is invaluable as the world begins to open up.

It’s good that the Sanctuaries are so useful, because you’ll be seeing a lot of them. Every time you die or quit the game, you’ll end up back at the most recently visited Sanctuary (as an aside, the “Bell of Return” item can be rarely found and used for the same effect, which renders it worthless). Happily there’s always a Sanctuary only seconds away from a boss, meaning that you never have to travel far for another attempt.

Most bosses will take a few attempts, to be sure. The bosses range from bizarrely easy to several-attempts difficult, but are all fair, utilising short and repetitive patterns that ensure they can be beaten by patient players. All of them have incredible art, too – from skinned giants to lizard-birds, there’s no shortage of weird monstrosities. 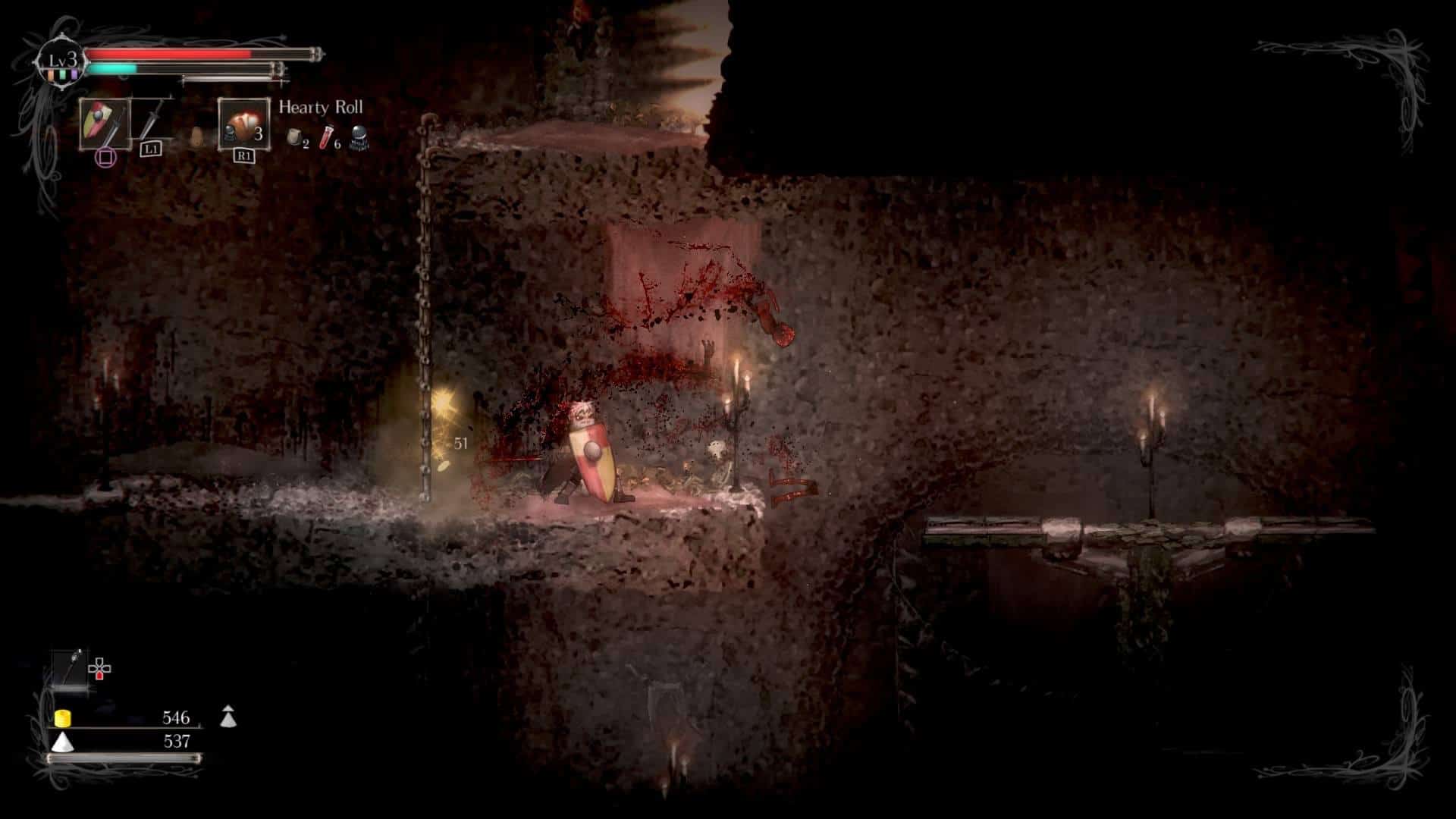 Unfortunately, the difficulty curve needs to be called into question. This is no doubt partly due to the non-linear nature of the game – locations can be discovered from different entrances and at different levels of progress – but I went from beating one boss after several attempts to defeating the next without so much as being hit. While this could also be partly due to certain bosses being more or less effective against different character builds, it was very jarring and significantly reduced the satisfaction of clearing some areas.

Generally speaking, though, the combat is satisfying and addictive, to the point that I’d say it’s the single best thing about the game. Hitting enemies with a heavy attack leads to them exploding into a gory mess, and well-timed parries and rolls are a necessary part of survival.

However, I would like to note that rolling through enemies felt extremely finicky, and throughout the entire play through I never quite knew if my next roll was going to pass straight through an enemy or whether I’d just roll helplessly into their shins. I also found myself stun locked on more than one occasion, meaning that after the first hit I didn’t get a chance to fight back until the next attack hit me, repeating ad infinitum. 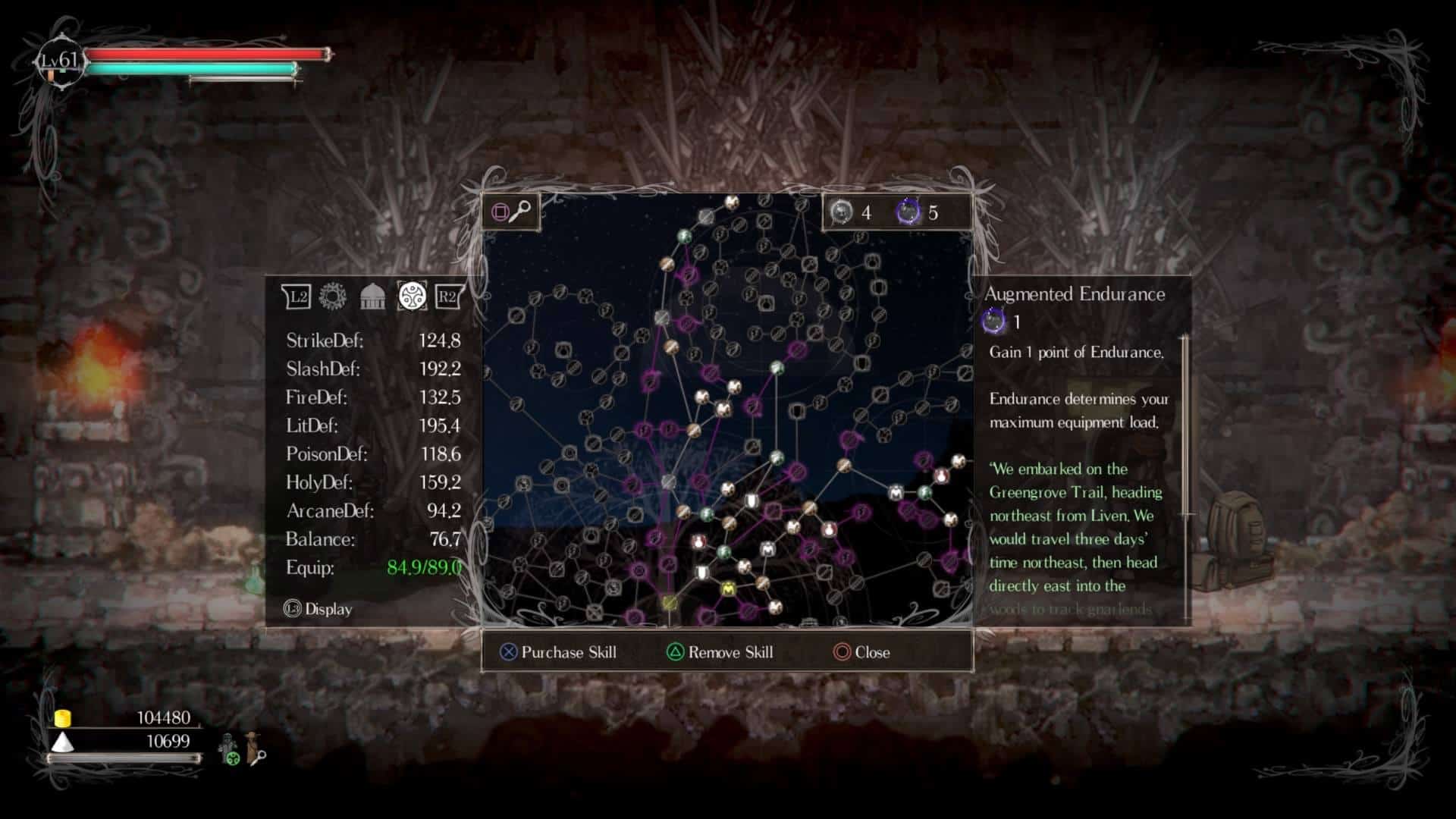 Once defeated, enemies drop items that can be used to craft equipment, as well as Salt, the currency used to level up your character and trade with most NPCs. Gold also exists as a currency, but is used so rarely and drops so frequently that I’m not sure why the developers bothered to implement it at all. While at a Sanctuary, the player character can spend Salt to level up, granting them a single skill point.

Yes, a skill point. As derivative of the Souls series as this game can be, this is a major point of difference. Points can be spent on the, ugh, Tree of Skill in order to specialise your character’s build, from great-sword wielding maniac to wise old mage. This means that you might find a shiny new sword that can’t be used until you unlock the “Swordfighter II” node on the tree, but also allows you customise your character in any way you can imagine. It’s not an especially imaginative system, but it is an effective one.

That neatly summarises the entire game, really. As much as Salt and Sanctuary owes its existence to Souls, it retains a firm grasp on what makes that series so special and replicates it with class. There’s mystery – every step is a new and exciting adventure. There’s difficulty, but satisfaction in overcoming it. There’s some questionable design, like not being able to pause despite the lack of online PvP mechanics. But in the end, there’s adventure; a fascinating and well-crafted world, waiting to be both explored and overcome – though it won’t go down without a fight.