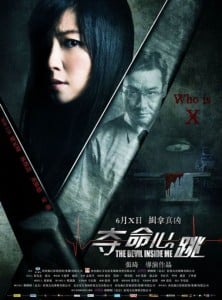 The Devil Inside Me

The Devil Inside Me is either one of the all-time, comically bad attempts at a dramatic thriller, or one of the best tongue-in-cheek B-melodrama this side of John Waters.  Unfortunately for director Zhang Qi, all signs, including the serious way that the subject matter is handled, point to the former. has also performed a “memory transplant” giving her the memories and emotions of the donor.  As she investigates the cause of her donor’s death, Lin meets Ma Benke (Victor Huang), the deceased’s boyfriend.  As both Ma and Jiang fall for Lin her visions of another life become increasing violent and troubling.

The melodramatic twists and turns pile needlessly on top of one another to the point of several laugh-out-loud climaxes.  Director Qi seems to have little control over his actors, extracting a notably wooden performance from Kelly Lin and a strangely silly performance from Victor Huang.  Veteran actor Leung does the best he can with the lines he’s given, giving his doctor Jiang a certain amount of troubled wit, but he too ultimately is overshadowed by the messy structure and direction. Qi alternates between a chamber-ghost story, a non-linear thriller and a soap-opera romance, but never finds the balance between the three.  As it is, The Devil Inside Me starts and stops its way to a predictable conclusion.

The sole pleasure in the film is the character of a rival doctor, played capably by Ying Da, obsessed with animal organ transplants and harnessing the power of the “memory transplant.”  Da steals his scenes with his inquisitive, naïve demeanor and firm belief in a wayward branch of science.