Home
Entertainment
‘Shaun of the Dead’, ‘Hot Fuzz’ and ‘Scott Pilgrim vs. The World’ Mash Up Video
Prev Article Next Article 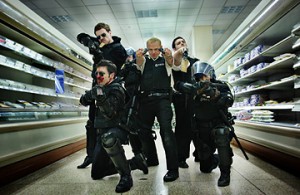 Joel Walden has assembled a two minute mashup clip of Edgar Wright’s three films Shaun of the Dead, Hot Fuzz and Scott Pilgrim vs. The World and it carries the approval of Wright himself who posted it on his official website.

Here’s what Walden had to say about his creation:

Let’s face it, Edgar Wright is one of the most talented directors out there right now. Being a huge fan of his films (and having met him in person as well), I felt that I should make a tribute for his three most popular films (Shaun of the Dead, Hot Fuzz and Scott Pilgrim Vs. The World). I hope you all enjoy this!”

And here is the video. Enjoy!


Prev Article Next Article
Tags:Hot Fuzz, Scott Pilgrim vs. The World, Shaun of the Dead