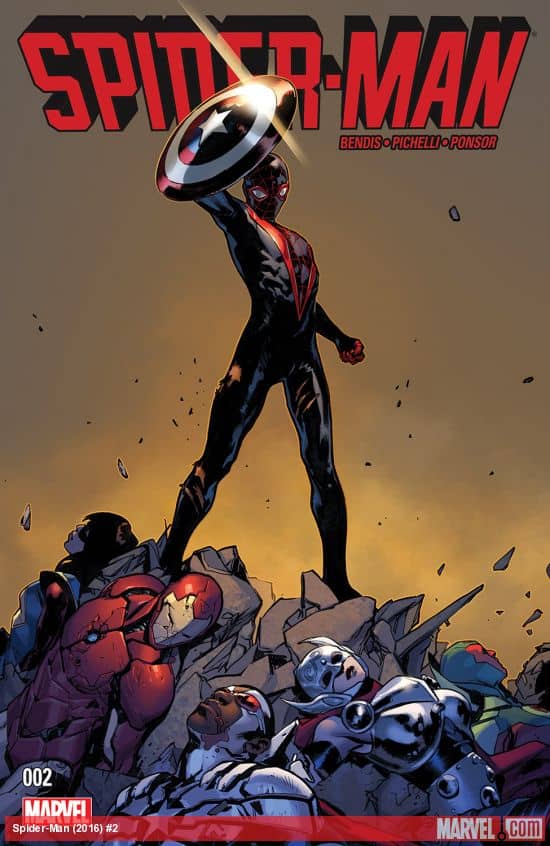 Things are going to get worse before they get better. In Miles Morales’ short career as a hero, he’s dealt with Venom, losing his parents in some form or fashion, and the end of the world as he knew it. In Spider-Man #2, his next biggest challenge rears its ugly head: the citizens’ public opinion of Spider-Man.

Picking up immediately off of the heels of the last issue’s aftermath of Blackheart wrecking everything in sight, including the Avengers themselves, two Spider-Men pick up the pieces and more or less have it out. Through the use of a Chibi-style cartoon related to Ultimate Spider-Man on Disney XD, we discover how Peter passed the torch to Miles, and in the present, that could lead to some regretful choices on Peter’s part  if people end up seeing who Miles actually is. That specific point is brought up later in the issue in a type of meta YouTube video where a nerdy YouTuber basically speaks for the fans and Miles as well to a point.

Sara Pichelli picks up right where the last issue left of in terms of dynamic action with the web swinger. No panel is wasted and various shots and smaller panels of both Spider-Man and the citizens of the New York watching the fight is appreciated until the battle reaches it’s conclusion. Bendis has spent years with Miles ,and even in the face of A-Listers, like Captain America (Still Sam) and Iron Man doing what they do best, and getting a “nice job” out of them, it’s cool to see have his inner thoughts and quieter moments with Ganke reflect that he’s still a teenager saving the world with his idols and aptly “nerdgasm.” Pichelli and Ponsor work wonders with Miles, his visual gestures, and facial expressions when trying to explain the ordeal to Ganke, and it’ll bring a smile to anyone’s face without a doubt. It’s at this point of the issue where Bendis basically gauges fan reaction to a new Spider-Man, who thanks to a video, are aware he’s a person of color much to Miles’ dismay. He doesn’t want to have the qualifier of “black Spider-Man” simply because of his skin. But because he is the friendly neighborhood Spidey, he might have trouble quieting New York’s wrath because a classic old school Spider-Man villain is waiting in the wings to pounce.

Not to be completely outdone by his exciting alter-ego, Miles has trouble on the home front in the form of his Grandma coming into town because heroes can’t maintain their grades and save the world at all in the Marvel Universe. Things are becoming more personal and risky for both parts to Miles’s life, and we only await the next issue to see what Bendis and Pichelli will do to put our new Spider-Man through his paces.