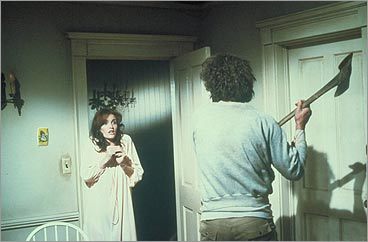 I have this story that I like to tell after I’ve been drinking about the night that I was alone in our house and thought someone had broken in. I was scared shitless. There was very clearly someone wandering around the first floor of my house, turning lights on and making a big racket on the wood floors. I was hidden in my closet. When I finally summoned the balls to emerge from my closet, lights had been, indeed, turned on where they were previously off. Doors were open that had been closed but the outer doors were locked and nothing was missing. This was just one of several freaky occurrances that went down in that spooky old house. My sister has stories to tell about it, too, and I’m pretty sure that my brother had experiences there that he refuses to talk about. But my fascination with the paranormal doesn’t begin there at 18 years old, cowering in my closet. It actually goes back to being 6 years old and hearing my mom and dad talk about the old place they lived in when they were first married. Spooky shit there, too. Something about being at the mercy of an unseen presence scares the ever living fuck out of me. When I have nightmares, really bad ones, it’s often about living in a haunted house. I become paranoid of spirits in my own house when I listen to questionable EVP recordings on shady paranormal websites.
When people ask me what horror movies actually scare me, I rattle off a list of haunted house movies.
Haunted house movies are a tough lot. Hollywood seems to have lost the recipe for a successful ghost movie in a fire somewhere in the late 70’s because the popular opinion during production of these pictures is more, more, more! Show the audience everything! Spare nothing for the imagination! Subtlety and nuance have no place in a modern haunted house. Jump cuts, detailed shots of fucked up looking spirits do! Audiences don’t want to use their imaginations! They have no interest in letting their mind’s eye run wild after hearing a sound that they should have heard. They want to see the ghosts, god damn it!
And that’s why most haunted house flicks suck. Here are a few that don’t.
The Amityville Horror, 1979 I often take a lot of flack for citing this as a quality haunted house movie, as iconic as it is, but most people think it’s a piece of shit. But I’ll also be the first to point out that this legendary ghost story about the Long Island house with a demonic presence is a total fabrication. Jay Anson’s book, allegedly nonfiction, was written during a very hot time for the paranormal. The 1970’s was rife with ghost stories, ancient astronauts and ESP. Universities had real paranormal investigation teams, the government sunk billions into paranormal programs to keep pace with The Soviet Union, so people were primed for ghost stories. The DiFeo murder house, however, was not haunted as told by George and Kathy Lutz. It was abandoned because George’s buiness and mental health had deteriorated. But I digress. The ’79 Amityville Horror is absolutely packed with chilling scenes that often come across as a series of vignettes scattered through a movie of pieces and parts. Some work, some don’t but it rarely works as a whole. Plus that house is a seriously creepy design.
The Entity, 1981 Like The Amityville Horror, The Entity is based on an actual haunting case. A single mother reports being abused and raped repeatedly by an unseen force in her home. Her children are tossed around violently, as well. She enlists the help of a University paranormal team to document and assist in ridding the home of the spirit. The Entity is absolutely chilling in parts and paces itself very well, but the third act takes this turn for th absurd that is amazing in its insanity. It takes huge leaps of faith and logic in how the plot is resolved but it’s one of those pictures where the studio most likely thought that a downbeat ending would kill it at the box office and the script has giant demonic spirits being frozen in liquid nitrogen.
The Sentinel, 1977 Director, Michael Winner has street cred. He’s a working director with an impressive resume. How do you follow up the kick ass Charles Bronson vigilante vehicle, Death Wish? Why, with a creepy as hell haunted house movie about a woman living in an apartment building that is also the gate to hell. Cristina Raines plays an overworked fashion model that moves into an apartment building occupied by some seriously twisted people. Burgess Meredith plays her ultra creepy neighbor and John Carradine is unspeaking, unmoving blind priest who is the titular Sentinel. This is a downright frightening movie that has all the right moves. It’s all about atmosphere and freakish behavior rather a parade of shocking visuals. It builds slowly and releases the tension at just the right time for maximum creeps. It is still, to this day, one of the spookiest movies I’ve ever seen, one of the rarest executions of a proper horror movie.
Ghostwatch, 1992 The United States has the legendary Orson Wells War of the Worlds radio broadcast among one of our greatest fear inducing hoaxes, The UK has Ghostwatch. A little context is necessary for those outside of the UK to understand its significance. This was an allegedly real live paranormal investigation involving real BBC news personalities and some other TV personalities. In spite of this faux documentary having a prominent writer’s credit in the titles at the beginning, the investigation into this suburban London flat and the terrifying, child molesting spirit known as Pipes caused a great deal of panic around England that people still talk about to this day. Everything about it is meant to look live, including a series of supposedly live phone calls. The show is actually based on the British Enfield Poltergeist investigation that, itself, turned out to be a hoax, but very few people picked up on that. Instead, there was a wave of panic that the broadcast, alleged to have substituted for a seance on a national scope, helped the spirit escape in greater England where it would haunt the entire country. It sounds absurd and there are times when Ghostwatch most definitely seems fake, but it executes itself so perfectly and the scares are dead on. The ghost, Pipes, is secretly inserted into various shots but never explicitly pointed out. It’s up to you and your eyes to find him and when you do, it’s long enough for the shock to register with you. It ends on a typically British note, as all hell breaks loose in the studio, a cameraman on the scene is badly hurt and members of the family and news team disappear forever in a catastrophic finale. Ghostwatch is hard to track down for owners of Region 1 DVDs but it absolutely has to be seen to be believed.
In the face of godawful Hollywood haunted house remakes like The Amityville Horror and overexposed trash like The Messengers, the independent film world is taking up the banner and coming at you with a few big hype film festival only movies such as Paranormal Activity, said to be a pants-wetting horror movie about a couple recording the scary shit that goes down in their home and the upcoming Phasma Ex Machina, a film about an inventor that builds a machine that boosts ambient electromagnetic energy levels to help ghosts manifest easier and prove their existence, except that his invention comes with a terrible cost. Both have extremely creepy trailers and are looking like the future of haunted house movies. Phasma Ex Machina seems to be one part The Sixth Sense and one part Primer, if you get my meaning and Paranormal Activity comes off like The Amityville Horror meets The Blair Witch project. Not a bad way to be. Keep your eyes peeled for screenings of these independent films.