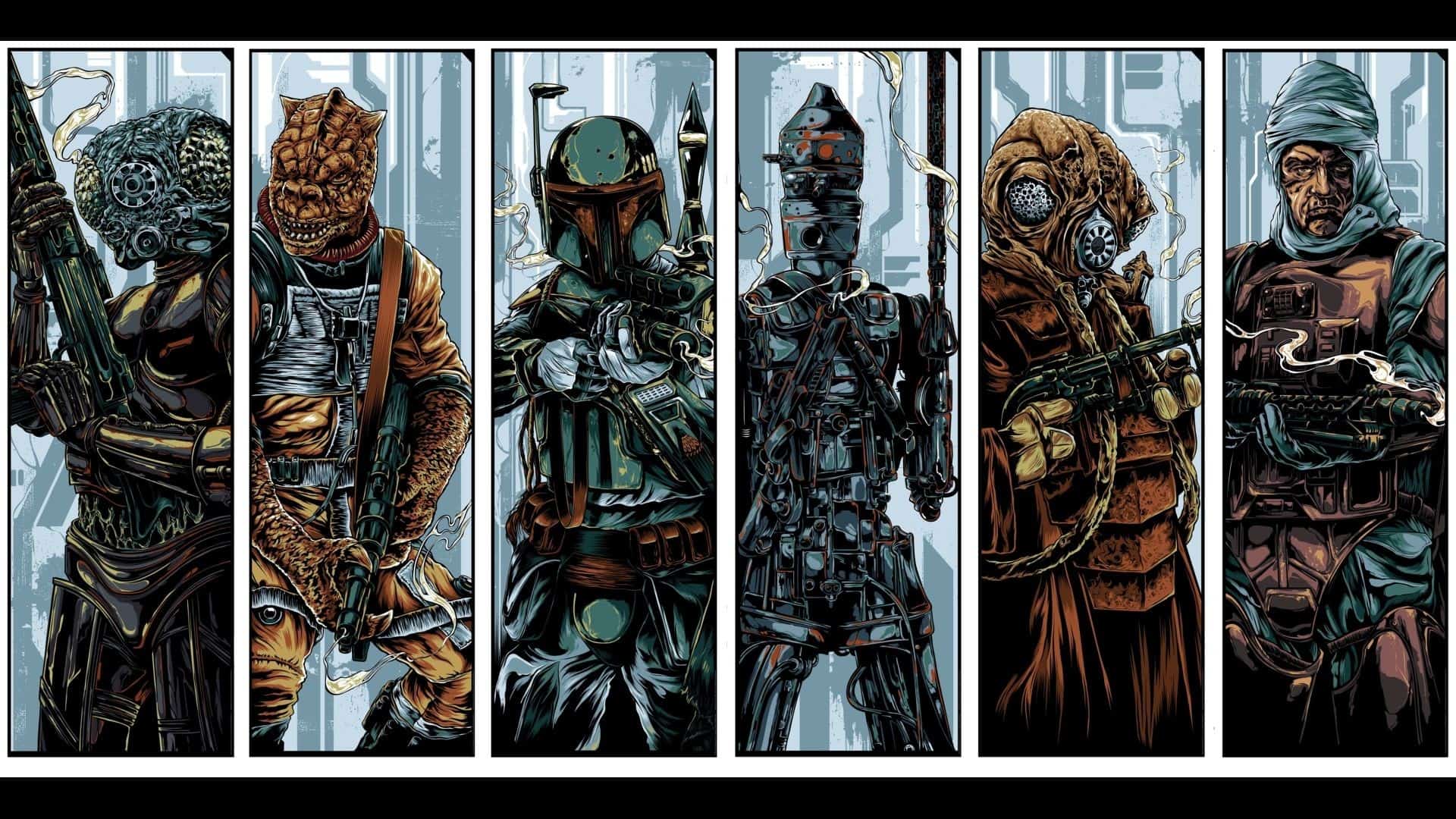 Oh, you all look cool. Most you get about 4 seconds of screen time though.

Naming classic Star Wars characters them brings forth warm, comforting feelings of experiencing classic adventures in a galaxy far, far away. Luke Skywalker, Leia, Han Solo, R2-D2, Bib Fortuna, Malakili, IG-88, Max Rebo, FLO, Notluwiski Papanoida, etc. Wait, what? Who were those last ones? I’m sorry, have you not delved into the expanded Star Wars universe like most normal Star Wars fans have? There are so many amazing characters to notice in almost every scene of the movies. They’re oozing with background eye-candy that lazy Stormtroopers might glaze over, but astute disciples of the Force can easily spot.

Don’t be fooled by pedantic terms like ‘tertiary’, ‘quaternary’ and ‘quinary characters’, that’s the Dark Side talking, trying to confuse people with overly complicated words. There is no such thing in Star Wars. All the characters matter because with so many different races, they add flavour to the scenes. They make them look cooler and feel bigger than they otherwise would be. The Prophecy might say that Anakin brings balance to the Force, but the true fans out there know just how valuable decorative characters are to the universe. Also, what good was the original Star Wars Customizable Card Game other than to learn about all these background characters anyways? It’s not as though anybody understood how to play that game. 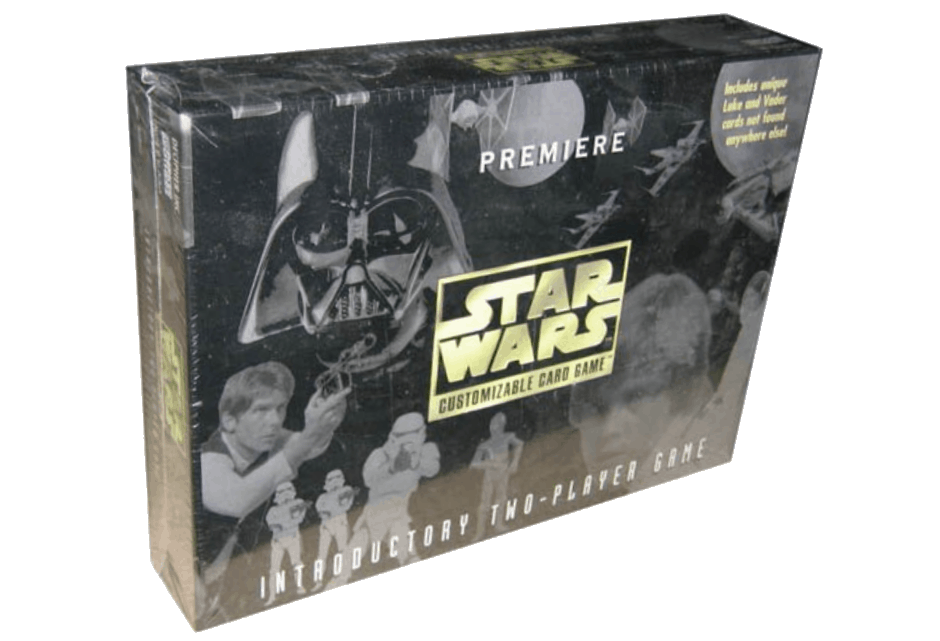 Please, don’t pretend you knew how to play this thing. Reading the instruction book only brought with it anger, hate and suffering. Operating the Death Star is simpler!

The following list of ten minor Star Wars characters is in honour of an entire galaxy replete with wild tales about imaginative creatures, sophisticated cultures, and vast histories that populate it. This is for the fans. Warm up the blue milk and leave no Muun behind. 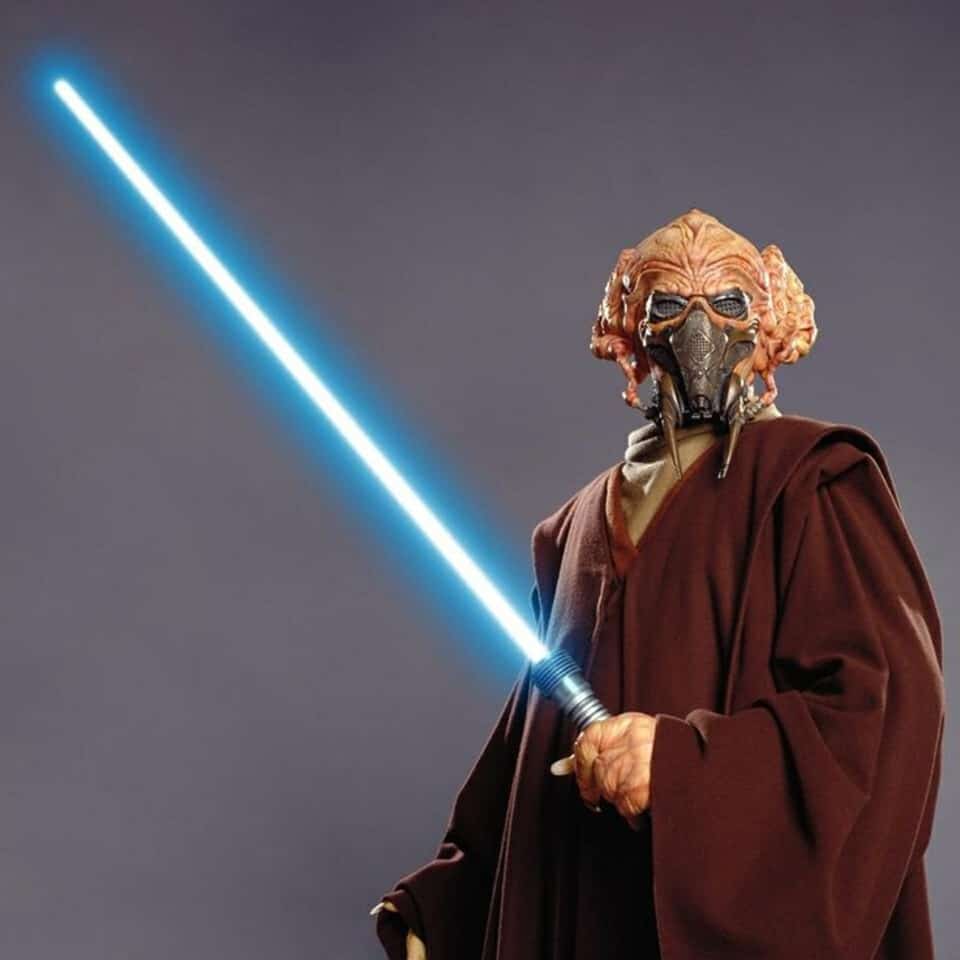 If someone with only limited knowledge of Star Wars was told this fellow was a hero and a Jedi Master, they would never believe it. Who could blame them? He looks like a monster out of the black lagoon and his facemask is something a serial killer would wear. Freddy Krueger would probably run away in terror at the site of this guy. Despite his less desirable physical qualities, he somehow became a supreme Jedi that protects the innocent, thwarting evil at every opportunity. Moral of the story: don’t judge a book by the look of its cover. 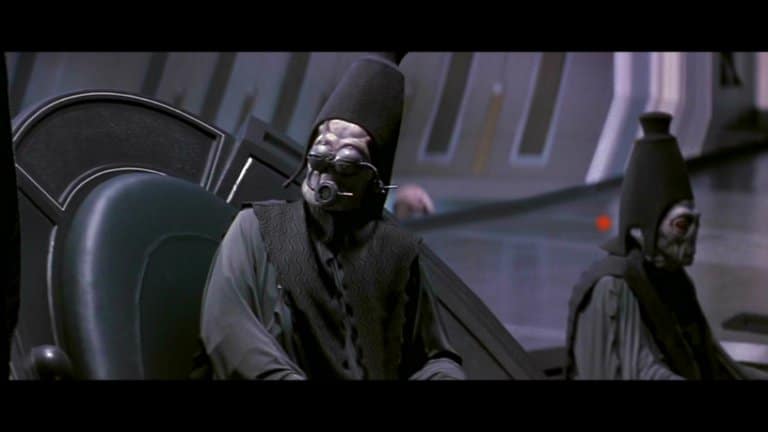 There are two types of Neimoidians featured in Episode I. The first are the ones that get all the glory from invading Naboo, snobbishly sitting those mechanical thrones and talking in bad Japanese accents. The second are the true heroes of the Trade Federation, the pilots of the gigantic doughnut shaped vessels that wear what look like fanciful super goggles and breathers. Without them, how would the Trade Federation have been able to park their doughnuts around Naboo and just sit there for weeks? No one knows for sure what they see through the prism of their eye gear but legend has it they’re a pre-cursor to the Oculus Rift. 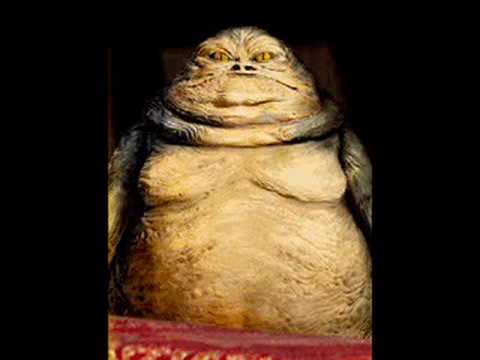 Jabba is one of the iconic characters of the original trilogy. A disgusting, obese tub of lard that rules his palace with a slimy fist, he is a gangster feared by many. Imagine the surprise of many when Episode I provided the briefest of glimpses of a female Hutt! For every male creature, surely there is a female equivalent. On the downside, it does convey haunting images of what it must be like when Hutts get together for a playful fumble…*Shudder* Moving on! 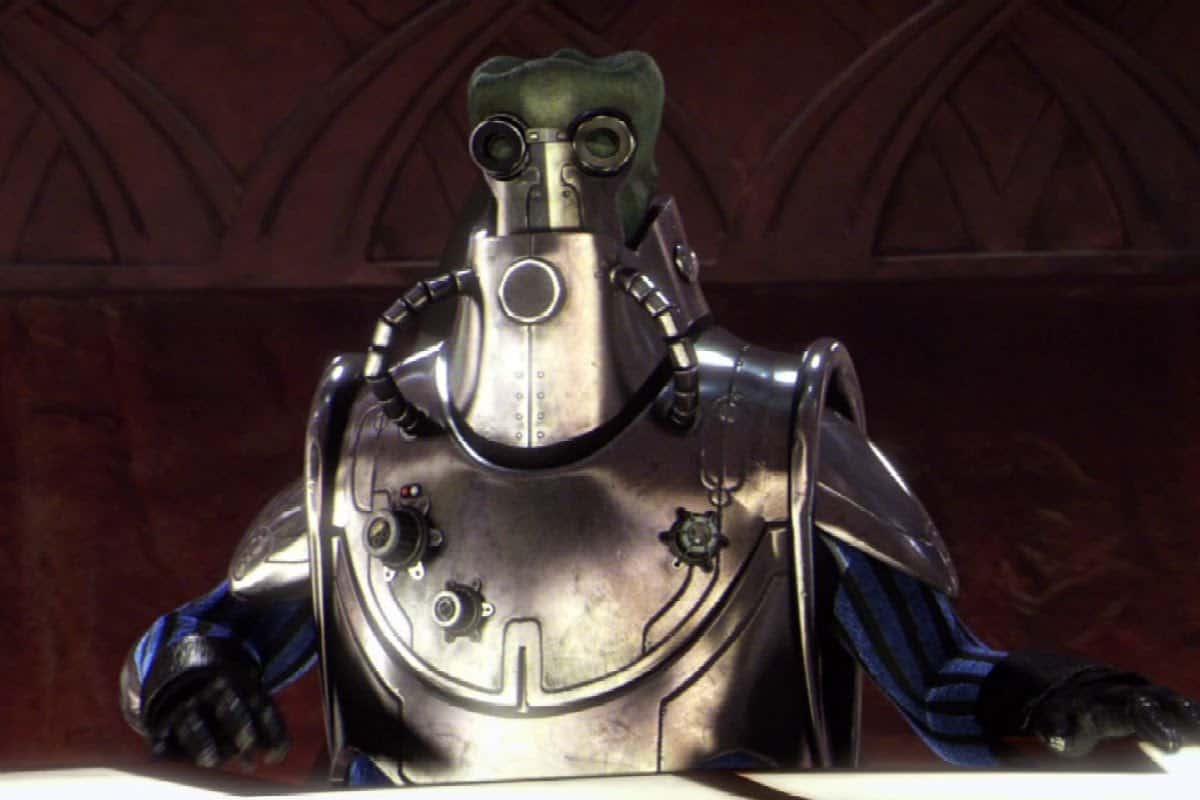 This fellow from Episode II epitomizes some of the very best of what Star Wars background characters have to offer. He is seen for only a few seconds at the Separatist conference, but looks and sounds like a creation the filmmakers put a lot of offbeat brainstorming into. His green skin and the shape of his head makes him look a bit like an avocado. His attire resembles a tin can more than anything. The best part is when he speaks in both English and in what sound like radio signal tones! Multi linguist and based off a delicious fruit? Now that’s a catch! 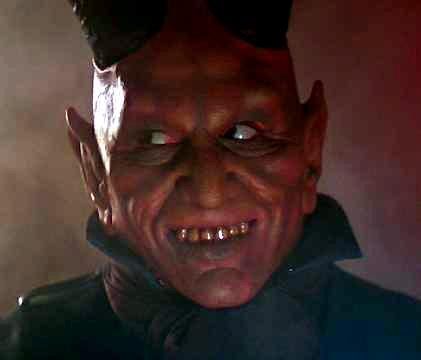 It stands to reason that the cantina sequence from Episode IV is a goldmine of remarkable background characters. Among the army of weird looking denizens is this chap, a cross between a human being and the devil himself. Even his gaze and duplicitous grin suggest a diabolical personality, just waiting to make a soul-sucking deal with some poor sap needing safe haven from patrolling Stormtroopers. As Han Solo once said, I’ll see you in hell! 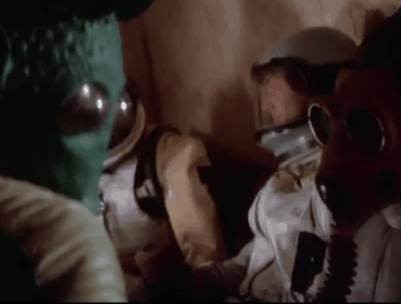 Neil Armstrong has the historic distinction of being the first person to walk on the Moon. Apparently on his way back to Earth he took on the name Danz Borin and stopped off at the Mos Eisley Cantina for some refreshments in celebration of this monumental achievement. Borin? Not boring at all! The drinks are on us! Just be mindful of Greedo and that Mephistophelian-looking type lurking about…

This ant-eater looking chap from Episode IV is the one character on the list that arguably does play a fairly important role in a movie. As an informant to the Empire, he snitches on Luke and Obi-Wan to Stormtroopers at Mos Eisley on the lookout for C-3PO and R2-D2. Oh, these aren’t the droids you’re looking for? Huh, not if this prattling little tattletale has anything to say about it! 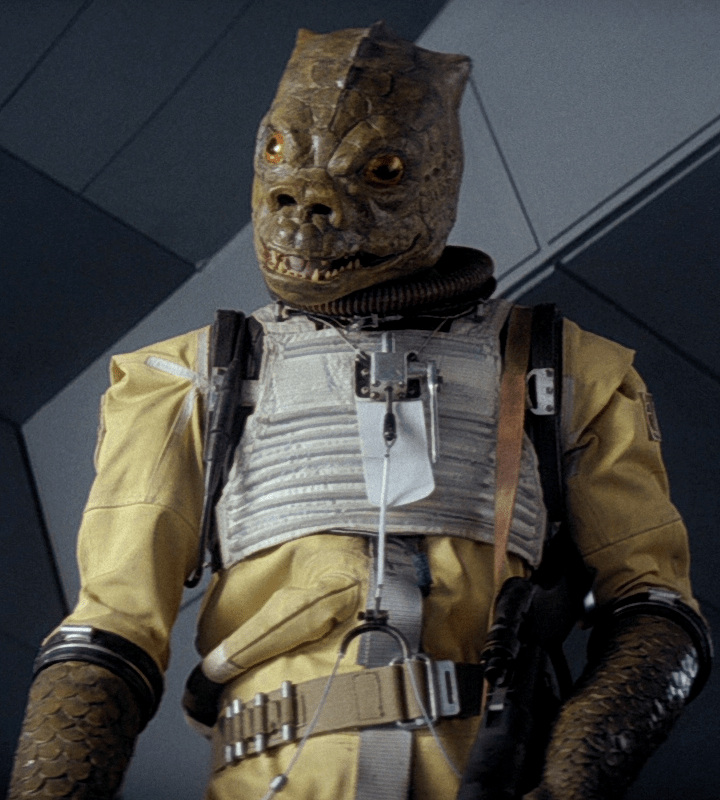 One of the great moments in Star Wars background character lore arrives in Episode V when Darth Vader calls upon the assistance of bounty hunters to track down the Millennium Falcon. The cast of characters (seen the image at the top of this article) is borderline legendary. A lot people know about Boba Fett (thank you profusely, Episode II), but this lizard-dino hybrid takes the cake. The Jurassic Park velociraptors fear nothing, but they haven’t met this chum. 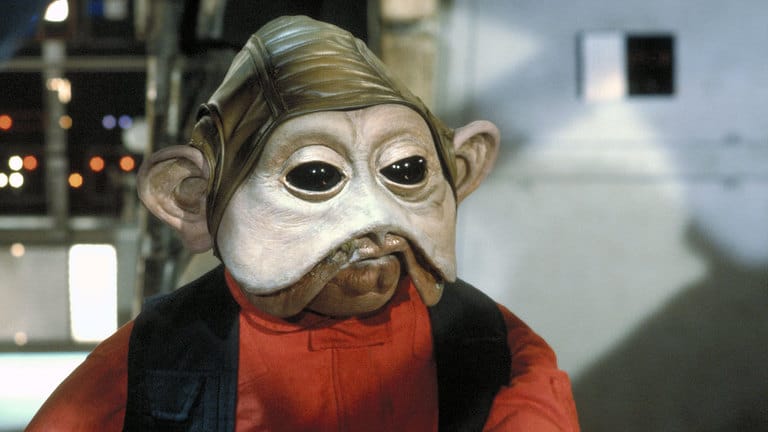 Rivalling Kardue’sai’Mailoc as far as complexity of name pronunciation is concerned, this fellow is one of the few gentile, benevolent characters on the list. Seen in snippets in Episode VI riding the Millennium Falcon with Lando, he actually looks like a nice enough pal. Those cute, sleepy black eyes do most of the work, as does his adorable laugh when the Rebels celebrate their climactic victory over the Empire. They say that laughing is contagious and they weren’t wrong! 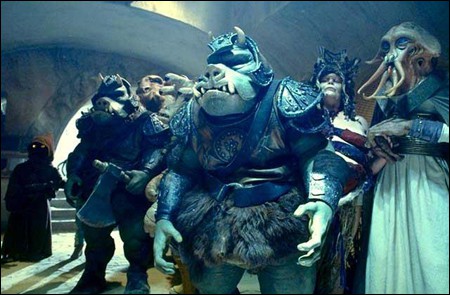 Not a character name but rather that of a race, the Gamorreans can be seen a few times in the rescue mission sequence that opens Episode VI as guards in Jabba’s palace. Honestly, just one look at these over-stuffed, sweaty chumps says it all, does it not? It’s small wonder that the Rancor monster delights in chowing down on one of them. After all, how more fitting can it get than having pigs protecting Jabba the Hutt? Fire up the grill and the condiments!

May the Force be all of you, always!

Seriously, they’re going to need it. We see these guys on screen for barely a couple minutes each.