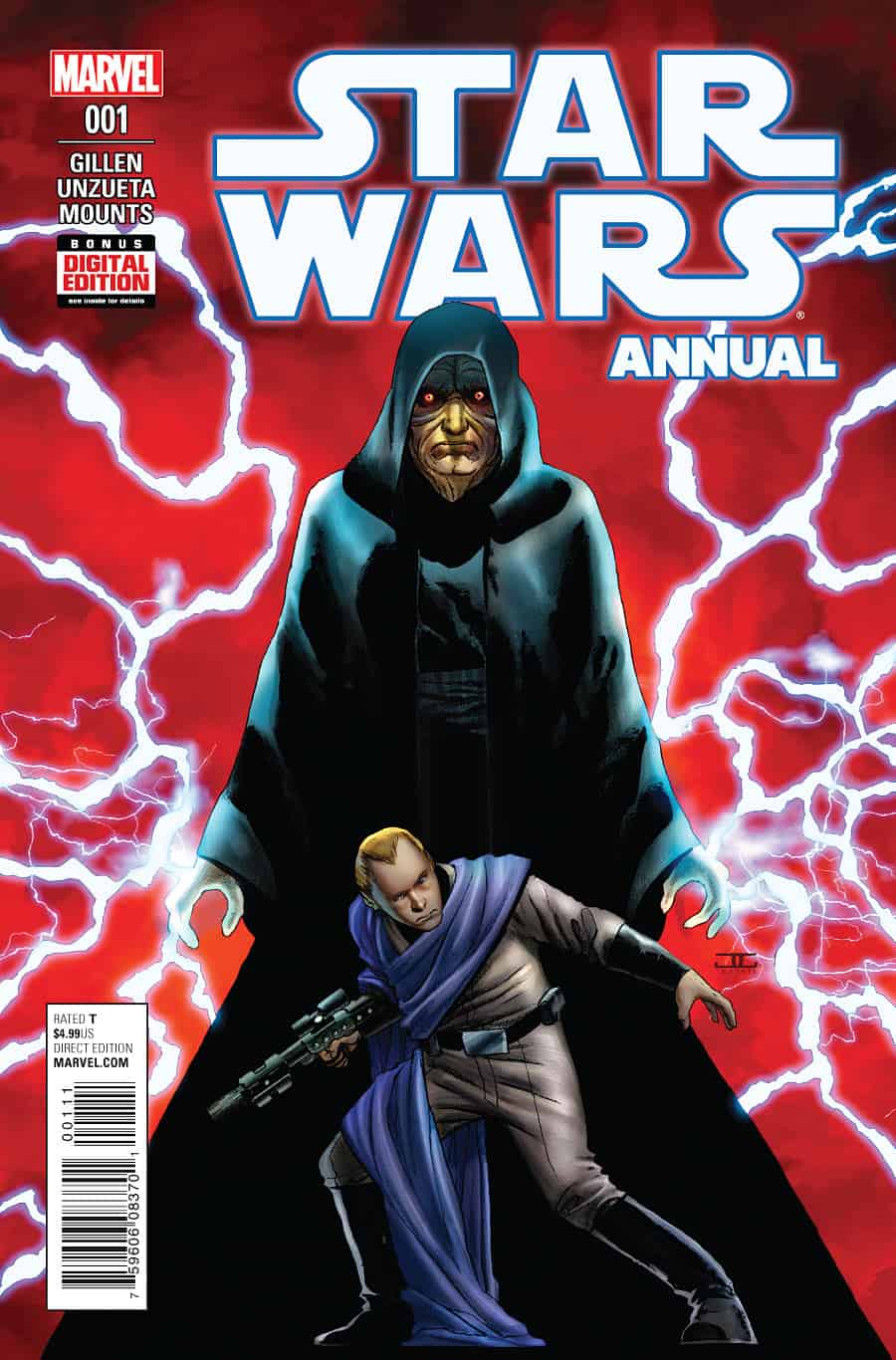 A good annual needs to do one of two things: tell a story featuring the series’ regular characters that is bigger than any one regular issue could contain, or use the opportunity provided by a non-regular issue to do something completely outside the norm of the series. Star Wars Annual #1 takes the latter approach, showcasing the fight against the Empire in a completely different way, sidelining all of the regular characters (except Leia, who only appears via holographic communication) and plotlines but keeping with the overall tone of the series. The end result is a fun, somewhat slight, story that deepens the Star Wars comic book universe.

Set entirely on the capital world of Coruscant, the story focuses on Rebel spy Eneb Ray, who is deeply embedded on the planet (to the point where he doesn’t even know how many, if any, other spies are on the world). Tasked with rescuing a group of senators sympathetic to the Rebellion that are slated to be executed, Eneb uncovers a rare opportunity to strike a significant blow against the Empire, albeit one which risks exposing himself and all the other Rebel spies on Coruscant if it fails, and thus effectively wiping out the Rebellion’s entire intelligence operation on the planet. 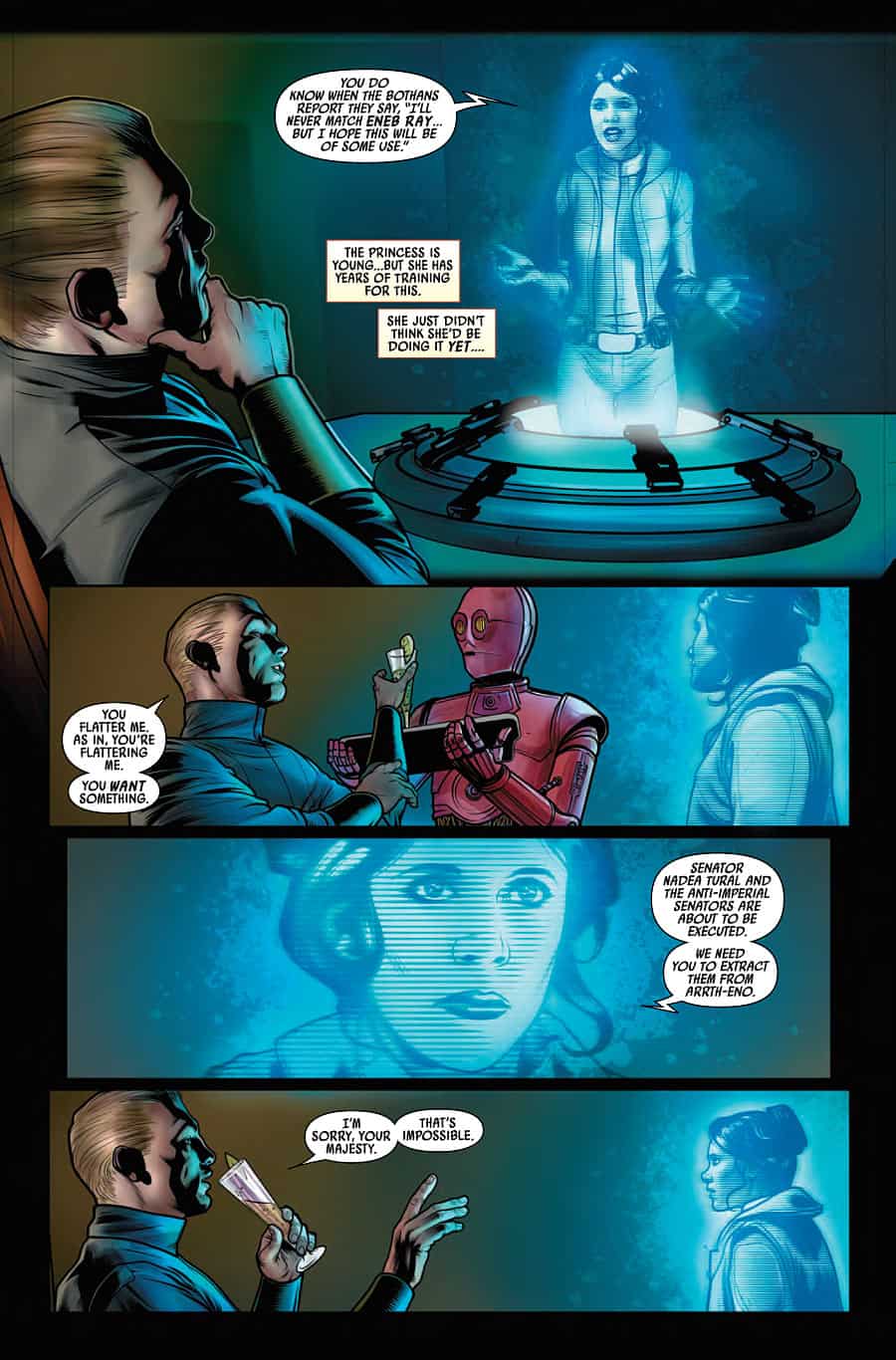 As the writer of Darth Vader, Kieron Gillan handles this kind of high-level government espionage and intrigue on a regular basis, and he puts those skills to good use her, as Eneb is forced to balance doing bad things for a good reason with a desire to do more straighforwardly heroic things (it goes unstated, but Eneb is basically setup in contrast with Luke here – both are doing important work to bring down the Empire and could easily be considered heroes, but Luke is the flashy hero whose actions everyone – in-universe and comic book readers alike – know about, while Eneb’s acts of heroism are more subtle and shadowy, no less important but less well-publicized), only to find his transition from secret spy to noble hero undone by the Emperor’s ability to cunningly manipulate every situation to his advantage.

Fittingly for a story about the price of over-the-top heroics, the art, from Angel Unzueta, lacks the sheen of John Cassaday or the raw energy of Stuart Immonen, but it gets the job done with clean layouts and easy-to-follow action. Eneb is no superhero, and even the Emperor is depicted as more of a shrewd manipulator than a grotesque super-villain (the Emperor displays some of his Force powers by the end of the story, but his role in the story is more about Palpatine the Arch-Politician than Palpatine the Sith Lord). The art is suitably restrained to reflect the more low key action of Eneb’s methods without losing the ability to tell the story in an entertaining way, and when Eneb does burst into action, the artwork manages to pop along with the character.

Certainly, this is not required reading; anyone reading the regular Star Wars book who skips this won’t miss out on an important chapter in the continuing adventures of Luke, Leia, Han, etc. But this is nevertheless an entertaining issue which makes a significant contribution to the Star Wars comic book universe, widening the conflict between the Rebellion and the Empire to show that not all battles are fought with lightsabers and spectacular explosions, and how easily evil can twist the most heroic of intentions to its advantage.