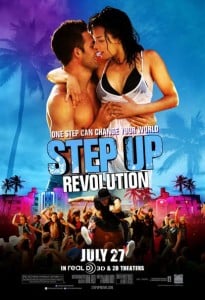 Here is an interesting little franchise. The Step Up films, as far this movie reviewer can tell (having not seen any of the previous three episodes) do not follow any overarching plot, continuous from one instalment to the next. Nay, each is a self-contained dance obsessed adventure involving a revolving door of characters, although IMDB indicates that a couple of performers make appearances from one film to the next. This may speak to ignorance, but it feels as if no one hypes, anticipates, goes to or afterwards discusses these films. Perhaps the safest claim is that the series’ most notable attribute is helping to put today’s unexpected poster boy for cool, Channing Tatum, on the map as he starred in the opener. Still, in the summer of 2012, here comes the fourth film, subtitled Revolution.

Scott Speer’s film takes audiences to sunny Miami, Florida, where Sean (Ryan Guzman) and his dance troop, self-baptized ‘The Mob’, are competing in an online challenge in which dance bands are called upon to perform outlandish, live performances on the streets or wherever they see fit, with the first team to achieve one million You Tube views earning sweet, sweet victory and some cash. Even though they impress onlookers in the film’s opening scene, where The Mob brings traffic to a stand still at mid day with an elaborate, stunt filled party number, they nevertheless lag well behind on the leader board. To make matters even worse, Mr. Anderson (Peter Gallagher) the owner of the first class hotel where Sean and some of his friends work, is planning to demolish the part of town along the water where his gang and some cultural minorities have lived for years, to be replaced with stunning new highrises. Emily (Kathryn McCormick), a dance student at a prestigious school in town, comically makes Sean’s acquaintance once day at a beach party, The two feel an immediate pull towards one another. The positive side is that Emily fits well enough into The Mob given her prodigious skills. The downside is that she is Mr. Anderson’s daughter, information that, if revealed to the gang at large, would certainly create a rift within this tightly knit, desperate group. Reviewing this film having not seen its three predecessors is a strange situation. The awkwardness has next to nothing to do with any underlining worries of not understanding the context of what transpires in Revolution in relation to the other Step Ups (no such worry exists whatsoever in fact). It is far more related with the following burning question which irks the mind: are the previous three movies this poorly written as well? It goes without saying that the clear cut counter point to any negative reactions to the writing which goes into a movie of this nature is: Why worry about the script at all? The purpose is to enjoy the dance set pieces! When it comes down to it, such a counter point, in truth, is not far off. If one finds pleasure in the intricately choreographed troop dancing, then one shall walk away from Revolution mostly content. Nevertheless, the film does make legitimate attempts at trying to contextualize the dancing, giving it purpose and by extension formulate some sense of three dimensionality from its protagonists and antagonists. Because of that, the movie’s script is fair game for criticism, not to mention that it even tries to be relevant in its depiction and evaluation of dance’s politically charged potentiality. On that level, the movie is even sillier.

Consider: Early on in the film it is revealed that Emily is the daughter of the story’s chief antagonist, Mr. Anderson. She confides this truth to her new lover, Sean. Both agree it best that this fact not reach the ears of the fellow Mob members. What brings them to such a conclusion? After all, the film makes no qualms about showing just how much Emily wants to be a part of The Mob and owes a distaste for her father’s real estate plans. She is clearly on the side of the ‘down on their luck heroes’ and has leverage by being Mr. Anderson’s daughter. What fear is there initially in not using this unforeseen alliance as a powerful tool in thwarting Mr. Anderson’s plans? Things evolve ever more clumsily in the latter stages of the plot when Emily, still keeping her true identity hidden from The Mob, teaches them a humungous revelation: it is possible to create street art with a socio-political message. Oh, is that so? Well, apparently The Mob, for all their hip qualities, had no clue this melange of politics and art had ever been attempted before in the history of mankind, judging by the way their eyes light up upon being explained this by Emily. It is strange that they had not thought of this before, that they had not found such inspiration from, oh, just about a million other artists before them. On the more character-focused side of things, the obligatory rifts between Emily and Sean as well as between Sean and his best friend ever, the latter argument exploding when Emily’s true nature is revealed, are unnaturally forced in part because of the aforementioned thematic problems with the script, and because the acting simply is not very good. Speaking of acting, one assumes Peter Gallagher is not in very high demand these days, seeing as how this fourth Step Up film is one of the rare productions he has been seen in as of late. Honestly, he is a fine actor. Why does he not receive more offers? Enough with the complaints about the script, how is the dancing? To be honest, it is really quite impressive in certain set pieces. Credit where credit is due, the creativity which went into the planning and execution of the dance numbers is impressive. What strikes the viewer above all else is not necessarily the physical prowess and grace of the performers (that, albeit commendable, is to be expected), but rather the eclectic nature of said numbers. No one sequence resembles the last. In fact, each is completely different from one to the next, with the locations, themes, costumes and music varying greatly. Director Scott Speer may not have a clue how to tell an interesting story, but the man knows how to put on a show. Highlights include a numbers which occur at an art gallery during opening hours, a fancy high society restaurant and the grand finale at the shipping docks, with extra emphasis put on the term ‘grand.’ Seriously, it is amazing. On a side note, the 3D effect is incredible in the film. The decision to utilize 3D is somewhat odd given how when the dancing starts, viewers will probably be paying attention to the moves and audacious choreography than the literal 3D graphics, but by paying closer attention to it, it is pretty clear and very well done. As per usual however, it adds nothing pertinent to the film per say.

Fair is fair, and in fairness, Step Up: Revolution does have its moments. Unsurprisingly, all of them are purely dance related, hence the biggest issue with the film being having to wait patiently between a lock of muck between each set piece. The movie can be fun, but movie goers enter at their own risk especially the more impatient ones. For about 16$ (with 3D), you have a decision to make.